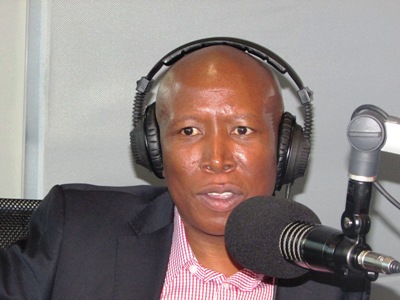 During the over hour-long discussion, Malema gave his views on a multitude of topics. Here are some the highlights on video. A story will follow.

At one point Malema said the EFF wanted to occupy Steyn City and explained how that situation concluded. He also clarified his land grab comments and discussed the land ownership debate.

Malema gave his views on how President Jacob Zuma broke the law and thus why he is unfit to hold office.

Malema also spoke about whether the upcoming ANC policy conference and internal elections would be peaceful as well as on threats to his safety and of EFF party members.

Malema also discussed the ANC’s dirty tricks and how manipulated intelligence would always come to light.

When asked how he would respond to people who say the EFF can never rule South Africa because the party is too disruptive, Malema responded with this:

When a caller speculated that Malema was being handled by white people such as Rupert (Johann we presume?) and/or Democratic Alliance), he responded by clarifying the party’s relationship with Rupert and the DA.

To see the live tweets that were sent out during the interview, follow Michael Bratt on Twitter @MichaelBratt8