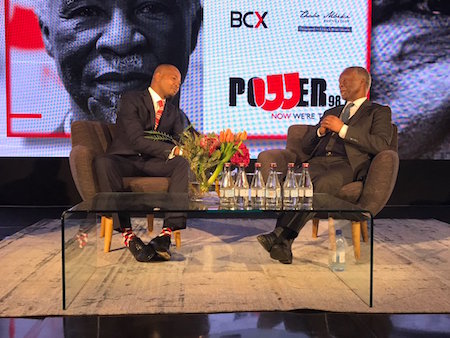 Last week Power FM hosted a high profile interview with former South African President Thabo Mbeki. Instead of simply hosting him in the radio station’s studio, Power FM decided to utilise a different approach, hosting a live event with the interview at the centre of it. Michael Bratt explores this strategy.

The scale of the Power FM event was unprecedented with the hall at the Inanda Club in Sandton packed. What was even more impressive was the calibre of guests with high profile politicians, business leaders, media personalities and socialites in attendance. Ample time was given for networking before Mbeki took to the stage as the main focus kicked off.

The over two-hour long conversation that followed between the former president and MSG Afrika Group CEO and founder, Given Mkhari, was filled with controversy and hard hitting moments. These included Mbeki remarking on what South Africa needs to do to get its economy growing.

“For this economy to grow it needs new investment and higher rates of investment. That means new factories, mines, all of these things. Second, you invest what you have saved. The savings ratio in this country is very low… we do not generate enough capital to create factories, thus create jobs,” he commented. He also believes, “We need to bridge this gulf of mistrust, lack of co-operation between corporate sector and the political power”.

Mbeki shared advice he would have given his younger self when he first took office, if he was able to. This included avoiding being driven by what appears to be popular opinion. “You’ve got to look at the actuality that you have to deal with today,” he said.

A large chunk of the discussion revolved around Mbeki giving his views on white monopoly capital. He labelled it as “the abuse of a phrase, of a term, a concept which was used in scientific economic literature which talked about monopoly capital”. Many attendees’ favourite quote of the evening was, “If you misdiagnose the problem, the solution will be wrong”.

Many Zimbabweans were angry when Mbeki chose not to intervene in the situation the country was facing when he was in power. The former president gave his side of the story ending with a poignant statement, “It is a responsibility of the people of Zimbabwe to determine their future, not South Africa”.

Mbeki also clarified his approach and policy to HIV/Aids, as many people have labelled him a Aids denialist.

Why create an event instead of just an interview?

Power FM’s clever strategy of creating an event around this interview, instead of simply having the former President in studio, seems to have paid off. The boost in brand awareness that the station received on Twitter and YouTube is testament to this. As of writing, the two hour 20 minute YouTube video has received over 58 000 views.

According to the hashtag tracking tool Keyhole, as of writing, the dedicated hashtag for the event #MbekiOnPower garnered a reach of 3 386 056 and 6 315 008 impressions. Power FM also received exposure through eNCA as a deal was done to broadcast the conversation live on the television station. This brand exposure for the station was the payoff to hosting an event, rather than simply interviewing the former President.

The future of live radio interviews

Tbo Touch also utilised this strategy on his TouchHD platform, though on a much smaller scale. He only invited members of the media, and not the public at large, when he interviewed the leader of the Economic Freedom Fighters (EFF) Julius Malema. It will be interesting to see whether other radio stations see the value in morphing their interviews into live events. It leads to massive brand exposure, if the right guest is secured and the event is promoted sufficiently and through the right channels.