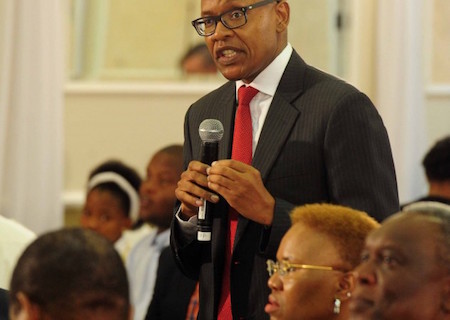 Mzwanele ‘Jimmy’ Manyi is buying the Gupta family’s media holdings, ANN7 television (Infinity Media) and The New Age newspaper. In a statement, Oakbay Resources said Lodidox, a company owned by Manyi, was buying the two media operations. The move would allow Oakbay “the time to focus on clearing its name in the face of unfounded media allegations”.

“The agreement is expected to be concluded over the next few weeks, subject to any regulatory requirements,” the Oakbay announcement said.

Spokesman for the Democratic Alliance, Phumzile van Damme, had just stepped off a return flight from London, where she represented the party at a Public Relations and Communications Association (PRCA) hearing into the Gupta family’s relationship with PR company, Bell Pottinger, when she heard the news.

“We are obviously quite concerned about this given the fact that Mr Manyi is a complete and utter ANC hack (and Jacob Zuma faction, specifically). He will sink ANN7 and TNA’s already very poor quality even lower,” Van Damme told The Media Online.

“Another concern for me is the fact that TNA, in particular, appears to be propped up by government funding. Mr Manyi will likely facilitate even more government funding for TNA and ANN7. I am giving some thoughts to how to remedy this and will announce action, in due course,” she said.

Manyi, when ANN7 first launched, had his own talk show on the channel. But later, he became one of its most frequently used commentators, adding his views on Pravin Gordhan, SARS, white monopoly capital, the NPA, the bank boycott of Gupta accounts, state capture… anything and everything that had an effect on Gupta businesses. 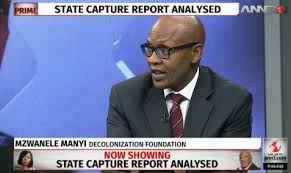 Dr Musawenkosi Ndlovu, senior lecturer at the Centre for Film and Media Studies, University of Cape Town, said ANN7 and The New Age were “never set up to be a business, but to be a proponent of a point view, a propaganda tool, with such intensity and vigour”. He says the problem for the Gupta family is that the political environment has become “less certain”. “The SABC has pulled out of the ANN7 breakfast show. The money is drying up.  The Guptas have made their money though. They are now running,” he said.

But, he warned, “As political, financially odd and secretive this deal is, we must  be fair and objective; let us give Mzwanele Manyi a chance. We should judge him on the basis of what he himself has done after taking over, not what other people  have done”.

Ndlovu said the Gupta established their media businesses relatively early in their “advancement in the South African political economy”, which was no insignificant matter. “It was actually testimony to the fact that Gupta family either intended to dominate or feature prominently in the SA political economy, and for a very long time. That, equally, the Mail & Guardian and possibly other mainstream print media were a well-thought-out targets of the Gupta family is another testimony to this.  That said, it is neither criminal nor unethical to establish media outlet in South Africa at any time in history,” he says. 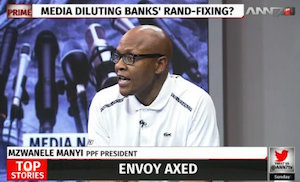 But, says Ndlovu, no discerning business person, having conducted due diligence of the South African media market, would have invested in a new broadsheet newspaper and 24-hours news channel at the time the Guptas did. He said it made no commercial sense. “Establishment of local newspapers, digital start-ups, tabloids seem to make more commercial sense. All other media were in decline. Yet the Guptas started The New Age newspaper in 2010 and ANN7 TV channel in 2013.  At the time of The New Age launch in 2010, the 2008 global financial crisis had already hit the world hard and the globally-connected local economy was in decline, because of this and other domestic factors. In 2013, when the ANN7 was launched, the economy could not justify venturing into news media business, even for the most maverick business person,” Ndlovu reckons.

While the announcement shocked many, senior media studies lecturer at Wits University, Dr Glenda Daniels, said she was not surprised. “The Guptas have acted in this country with no shame at all. Manyi has denied all links with them over and over again. Yet now we have this deal – a sale. The link is obvious and exposed,” she said.

“I also don’t trust what the Guptas say they will do and then what they actually do. Remember they said they were leaving South Africa for Dubai? What are they still doing here? This sale of their media assets – if indeed it is happening – is an indication that they are waking up to the fact that their plot to steal further in SA is unravelling. Maybe the nuts and bolts over state assets are being tightened and they won’t be getting all the government advertising that they have been for TNA and ANN7,” said Daniels. 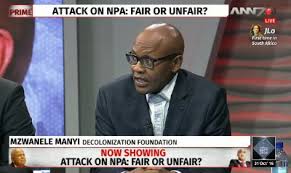 ANN7 is being sold for R300 million and Oakbay’s two-thirds stake in TNA Media, publisher of The New Age, is going for R150 million.

Anton Harber, currently on leave-of-absence as the Caxton Professor of Journalism and Media Studies in the Journalism Department at the University of the Witwatersrand, says he thinks “this is what rugby commentators call a hospital pass”.

“The Guptas are too much of hot potato now for banks and probably even for government departments and parastatals who want to support them. So they are dumping these liabilities – and passing them on to someone who is foolhardy enough to take them. It is vendor financed, so they are essentially paying Mr Manyi to take this headache off their hands,” he reckons.

“I don’t think this makes much difference to media diversity, given that the new owner has essential been the principal mouthpiece for the Gupta-Zuma nexus. Instead of these outlets being direct Gupta outlets, they now become indirect Gupta outlets. The only difference is that it is Mr Manyi who now has the headache of dealing with a venture that is losing many millions.

“New Age’s circulation is not even audited, so their actual sales must be insignificant. ANN7 has a tiny audience. I don’t see how the new owner can turn this around without huge investment. I also think that it is getting too risky for government departments and parastatals to give the kind of crude subsidies they gave the Guptas.

“So the Guptas have passed the ball – and the receiver is likely to get hit hard. Somebody will have to call ER.” 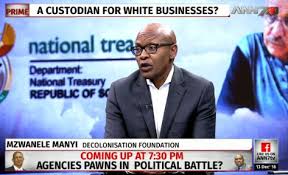 Oakbay’s acting CEO, Ronica Ragavan said, in the statement that the company was delighted to have reached agreement with Lodidox and the management team. “The sale of our shareholdings will secure the future of these businesses and help preserve the jobs of their employees. Both businesses are inherently sound and well positioned for growth in their respective market segments. We wish them every success in the future,” she said.

Manyi himself commented that, “particularly impressed that the shareholders of Oakbay have agreed to do a vendor financing at acceptable terms as part of their commitment to transformation and to expedite the transaction”.

Manyi said he was “delighted to have reached agreement with Oakbay and look forward to successfully completing the deal. These are two strong businesses which are full of potential and, under the right external circumstances, can become an increasingly important and relevant part of the South African media landscape.”

DStv, which hosts ANN7, has come under increasing pressure to axe the station from its pay-TV platform. A petition was launched calling on the Naspers-owned company to show ‘Gupta TV’ the door.

Thought I should tell you how much I have started respecting this man #Lodidox
watch out #WhiteMonopolyCapital , uare gonna be screwed.