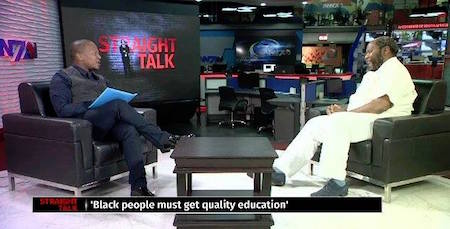 ANALYSIS: The big news of the week is that Jimmy Manyi has bought ANN7 and The New Age from the Guptas for a total consideration of R450 million. Predictably, there has been an eruption of cynical comments and probing questions on social media platforms.

How can Manyi begin to afford it? He who has been one of the biggest proponents of the White Monopoly Capital mantra and all its evils over the past few months? And how is it possible that these two businesses can be worth nearly half a billion rand in aggregate, at a time when most ‘old media’ outlets are battling – not only within the context of the South African economy, but in fact around the world?

The clue to answering both of these questions can be found in the fine print of the announcement: The whole deal will be vendor financed. In plain English: the Guptas are selling their businesses to Manyi, but the buyer will not have to pay much (if anything) upfront, as the sellers have agreed to wait for the money and be paid out of future profits (if any). This is all very convenient, as I’m not sure there would be many banks lining up to fund this deal…

While there is nothing wrong with a vendor financing arrangement in principle, it really only makes sense in the case of a sound business with a healthy dividend stream. When the founder of a rapidly-growing business decides that it’s time for a successor, he or she will often sell a substantial stake to the next generation in a similar way: strike the deal, and agree to be paid back over a number of years. Bearing in mind the realities of a market interest rate, which needs to form part of such an arrangement (not only because it makes basic business sense, but also because the tax authorities would attack it if you didn’t include it), means the business needs to produce a dividend yield (i.e. annual dividends as a percentage of deal value), which exceeds the implied interest rate in order for the buyer to make any dent in the overall debt obligation over time.

Let’s illustrate, based on the numbers we know. We’ll assume there was no down payment (unless Manyi enlightens us to the contrary), and base the calculation on an initial debt of the total R450 million. We also know that the prime interest rate in South Africa is 10.25% – and we’re prepared to give Manyi the benefit of the doubt in classifying him as a prime counterparty. Yes, it may be theoretically possible to find financing below prime in certain circumstances – for example, when someone with a solid credit history buys a house, but this is only possible if you are able to put down a healthy deposit… and the bank will make you sign security which means that they can repossess the property and sell it in case of default. And I think it’s fair to say that these conditions don’t apply in this instance. So the prime rate it is.

In addition to the periodic interest, the remaining question is how long the Guptas will be prepared to wait for their R450 million of capital value that is being ‘realised’ today. Five years? Possibly. Ten years? Perhaps. Longer? Probably not… they’re trying to “take profits” and exit, after all?

Back-of-a-matchbox calculations produce the following results: At a 10.25% interest rate, paying off R450 million over five years would require a monthly instalment of R9.62 million. If, however, the Guptas are more patient/generous and they are prepared to get their money back over a full decade, the instalment drops to ‘only’ R6 million per month… I’m no media expert, but that sounds like a lot of moolah to me, after paying salaries and other overheads.

What does this mean in practical terms? Call me a sceptic, but the Guptas are unlikely to ever recoup the amount of R450 million (in present value terms), which is making the headlines today. Whatever your views of Jimmy Manyi, and his political pronouncements, you should therefore give him credit: It looks like he has taken a fairly cheap call option (if not a free one), while probably not incurring any realistic downside in the process. That’s pretty clever business, if you ask me.

I am reminded of this extract from the latest thought piece written by Howard Marks (chairman of Oaktree Capital in the US):

Two guys meet in the street. Joe tells Bob about the hamster he has for sale: pedigreed and highly intelligent. Bob says he’d like to buy a hamster for his kid: “How much is it?”  Joe answers, “half a million,” and Bob tells him he’s crazy.

The point of this somewhat silly joke is that you can strike a deal at whatever price you want, if the value of the currency in which you pay is equally meaningless. Or, as may be the case in Monday’s mega media deal, if (most of) the debt is likely to be written off in any event.

This story was first published by Moneyweb (@Moneyweb) and is republished here with the permission of the editor.