LATEST NEWS
Home Broadcasting Cinema ‘A virtual mum put me to bed’: A view from the VR future of film

‘A virtual mum put me to bed’: A view from the VR future of film 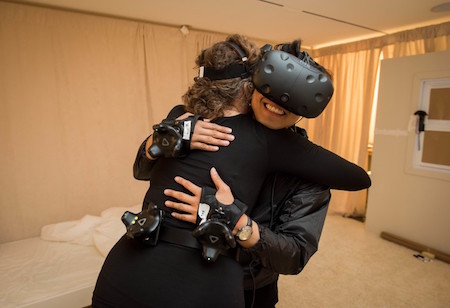 I’ve just got back from the Venice Film Festival, which for the first time showcased an exciting programme of genre defining virtual reality (VR) film. I’m currently developing a VR project of my own and for the last two years have spent many an hour queuing up at film festivals and in art galleries to see how various directors from cinema, fine art and theatre have experimented with such a radical and shape shifting medium. I have seen many VR works, some good, some bad but enough to convince me that VR feels like the very early days of cinema, a time when filmmakers are learning the grammar, rather than writing the language, of VR.

One of the strongest works I experienced in Venice was Draw Me Close, a recent collaboration between the National Film Board of Canada and the UK’s National Theatre. This VR experience was created by playwright and filmmaker Jordan Tannahill and documents his relationship with his mother, both past and present, as the two of them deal with her terminal cancer diagnosis.

Draw Me Close is part of an evolving genre of “reactive theatre” in which the virtual journey is combined with a physical journey through a stage set in which real-life “reactive actors” (unseen by the user) interact with you throughout the experience. The sensory feedback you receive is a powerful part of the experience. When the virtual mum goes to hug you, you receive a real life hug from the “reactive actor” playing her.

Once in the VR Headset, I was slowly led into a bedroom. I could see an animated sequence portraying a women, asleep in bed. A narrator was telling me about his experience watching his mum sleep as she struggled to recover from her chemotherapy. I was reminded of when my own mum was recovering from her stroke.

The piece then moved back in time. A virtual mum put me to bed. Suddenly, I was tucked up in a real bed, I could feel the softness of the duvet. I was a child again, thinking of my mum and the stories she read to me. Then the actress began to sing to me. Like many parents, I feel a huge nostalgia for the songs I sang to my son at bedtime. After what feels like a long journey, I’m led outside, the film over, and began to weep. For a while, I couldn’t stop. Film can have this affect on me too, but I was only in this experience for 12 minutes.

I was given a few minutes to recover before I left the space. I needed it. VR producers often factor in a decompression period in which users can reflect or discuss the piece before leaving the space. In a cinema, you can recover yourself as the end credits roll, but with VR the re-entry into the real world can feel very sudden – all it takes is the removal of a headset. Several producers, aware of how emotionally resonant VR experiences can be, have even started to include trigger warnings at the beginning of the experience.

Draw Me Close feels like a real game changer in terms of how stories are told in both cinema and theatre. It creates a new way of living a story, a multisensory experience which really heightens your sense of presence and immersion.

This is the crucial difference between VR and the flat film of traditional cinema. Chris Milk, a key VR director, said in a recent TEDx talk: “In all other mediums, your consciousness interprets the medium. In VR your consciousness is the medium.” In cinema narratives, the director tells you the story. But VR can create an embodied experience in which you are the story.

The creators making the strongest VR works in Venice really embraced how different the medium is from “flat film”. The story-being experience of VR doesn’t sit well with the storytelling techniques of traditional cinema. VR feels like a medium best suited for stories that unfold in real time, rather than past tense narratives. It’s no surprise, then, that so many theatre directors have taken to the medium.

One of the other key works on show in Venice, Alice: The Virtual Reality Play was produced by a team of actors, animators and developers. The reactive actors in this piece wore full motion capture sensors on their bodies and faces. As Alice, I interacted with the reactive actors in the space. Their words are synced perfectly with the animated characters in my VR experience via motion capture headsets, giving me the impression I was having a real-time conversation with the White Rabbit.

VR is an exciting new tool for interactive experiences and immersion. It creates a space in which you, as an audience member, are participant, player and protagonist. A space in which you can participate in a story rather than simply being on the outside looking in. Frank Rose, author of The Art of Immersion, writes brilliantly about the ways in which our emotions and technology converge: “People have always wanted to in some way inhabit the stories that move them. The only real variable is whether technology gives them that opportunity.”

Now it does. With bells on.