Big changes at the SABC with new board, new minister and new rules 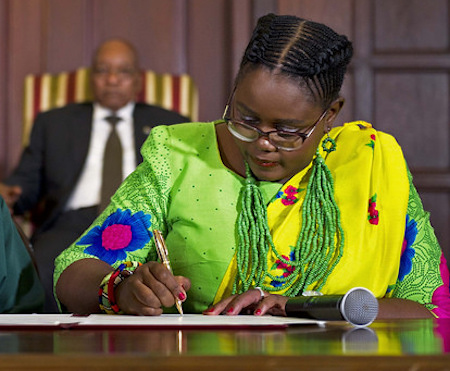 Opinions of the new SABC board are varied, but all are relieved that a board has finally been appointed, and that a judge has limited the power of the communications minister in interfering in the public broadcaster’s business.

The Gauteng High Court delivered its judgment on an application by SOS: Support Public  Broadcasting Coalition and Freedom of Expression Institute, joined by the Right2Know Campaign as a friend of the court, to limit the powers of the communications minister in appointing a board. Judge Elias Matojane ruled that the minister’s undermined the independence of the SABC and that the public broadcaster’s board should control its affairs.

The judge also found that the SABC’s executives such as the key positions of CEO, COO and CFO should be made by the board, and that the minister had no right to approval. The board can now also implement disciplinary action against executives, including suspending them. The board cannot be removed unless in accordance with the Broadcasting Act.

The judge was clear on the reasons for his far-reaching ruling. “The two applications are instituted in the background of systematic and repeated failures in the governance and management of the SABC. This has presented itself in the continuous turn-over of Directors of the Board with resultant financial mismanagement,” he said. “The critical systemic causes of governance failures and mismanagement were found to have been caused by ministerial interference in the governance and operations of the SABC.”

So it seems the new board has come in with more power than previous iterations to stand firm against political interference in the public broadcaster.

SABC welcomes appointment of new board

In a short statement the public broadcaster said it welcomed the appointment of the new board. Nomsa Philiso, acting group chief executive officer, said, “We are ready to welcome the new board and we will take them through an induction process, and work with them in steering the organisation in the right direction.”

A victory for logic and sanity

William Bird, director of Media Monitoring Africa (MMA) referred to the appointment of the board as a great victory for logic and sanity but added, “It can’t cloud the fact that it’s three weeks too late”. MMA and the SOS Coalition took legal action against the president over his inaction in appointing the board.

MMA welcomed the appointment as it showed follow through and Bird said there were some really excellent people in place. “Now is the time for them to get down and dirty and try and save our SABC,” he said

Bird believes that the first order of business for the new board is to appoint senior executives who can get the job done, while also dedicating any and all resources necessary to finding the culprits who threatened journalists. “We cannot forget that the dark period they are emerging from, included threats to journalists… If you leave it and it is not seen as a priority, it says to journalists that that may happen again and no action will be taken,” Bird said.

While SOS Coalition is satisfied with the new board members, the civil society organisation believes their appointment process was too rushed. “We needed more time to whittle down the list of 362 applicants to 36… If there was a mechanism in place to make sure that in the whittling down of those applications we are actually looking at objective criteria in the initial stages,” explained SOS co-ordinator, Duduetsang Makuse. “There is a lot to work on for the next round, but it was a lot better than what we have seen in the past”.

Makuse sees getting to grips with the financial crisis as the first priority for the new board.

Happy with the board, not happy with all board members

While the Media Workers Association of South Africa (MWASA) is happy that the public broadcaster has a board, its general secretary Tuwani Gumani said the union could “never be satisfied with all the names and personalities there”.

Designing a turnaround strategy should be the new SABC board’s first action, said Gumani. “Sit down and do a proper, thorough analysis of where the SABC is right now, where the SABC probably should be and putting in specific delivery points. The critical thing is for the SABC to first have a proper, thoroughly thought out turnaround strategy,” he commented. He added that certain people don’t believe that the public broadcaster needed a bailout, it just needed to fix the problems and capitalise on its strengths.

Concern around Potgieter-Gqubule and Makhathini

Those we interviewed raised concerns around two of the board members. The commitment of deputy chairperson Febe Potgieter-Gqubule was questioned, as she indicated during the interview process that she may leave the SABC board if she was appointed to the ANC’s national executive committee. Concerns were also raised around board chairperson Bongumusa Makhathini’s impartiality, as he is currently the chairperson of first lady Bongi Ngema-Zuma’s foundation. During the interview process he indicated he would resign from this position if he was appointed to the SABC board. But the fact still remains that both the named chairperson and deputy chairperson of the board have ties to President Jacob Zuma.

Challenges facing the board

While a new board has been instilled, it will still battle to overcome some prominent challenges. The biggest, said Bird, was ensuring quality people were brought on board in senior positions and that they be allowed to do their jobs.

Makuse explained that the structural and systemic problems that keep coming back board after board, which keeps the SABC in a problematic loop, was the main challenge, and said the new board would have to address these, rather than superficial problems. She added that rooting out political interferences is another area the board needed to focus on.

Gumani cited the technological impairment of the broadcaster as the biggest obstacle for the new board. “How do you transform a legacy broadcast organisation into a new age multimedia enterprise, because that’s what it’s supposed to be … when there is no proper policy?” he asked. “Until such time as we are very clear with policy we are not going to be seeing any benefits from the changes that are being made now. It is not just about the board, we need a complete change in mindset,” he concluded.

The new board’s appointment came at the same time as a shock cabinet reshuffle by President Jacob Zuma, which saw Ayanda Dlodlo become the new Minister of Home Affairs, and replaced as Minister of Communications by former Minister of Energy Mmamoloko Kubayi.

Kubayi now comes into the position with far less power than her predecessors, something that will no doubt annoy her boss.

The new board is: