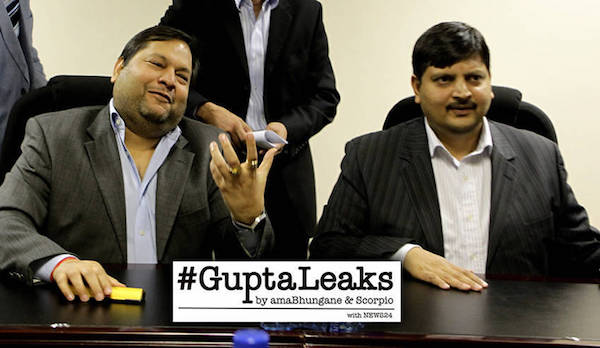 From today, the world’s journalists and media houses will have access to the #GuptaLeaks data trove.

The hundreds of thousands of emails and documents are available via an online facility launched by the Organised Crime and Corruption Reporting Project, Daily Maverick, amaBhungane Centre for Investigative Journalism and Platform for the Protection of Whistleblowers in Africa.

South Africans have been both enthralled and appalled by stories emanating from the #GuptaLeaks investigations. Details on how the Gupta brothers captured President Jacob Zuma and his son, Duduzane, as well as members of his family and his cabinet have laid bare the vast state capture project first exposed by former Public Protector Thuli Madonsela and her investigators.

The Guptas and their merry band of corporate thieves and tame government employees have benefited from state contracts and allegedly laundered billions of Rands offshore.

But the scandal has gone global, with several multinational companies now implicated in the Gupta’s allegedly criminal ventures. First to fall was British-founded international reputation agency, Bell Pottinger, whose work for Gupta-owned Oakbay Resources was exposed as a race-baiting, unethical campaign that ultimately brought down the company, which is now under administration.

Auditing firm KPMG, consultants McKinsey & Co and software giant SAP have also been implicated as authorities in the US, UK and Dubai start investigating links to the toxic family and their business network. Back in South Africa, there is deadly silence from The Hawks and the National Prosecuting Authority, giving credence to claims they too are ‘captured’.

“Daily Maverick’s Scorpio investigative unit and investigative non-profit amaBhungane have led reporting on the story in South Africa. The releasing partners feel that the data needs to be accessible to journalists widely given the potential for collaboration to expose the full extent of the wrongdoing,” the Daily Maverick said in an announcement today.