Shivambu apologises for attack on journalist, Sanef worried about ‘culture of impunity’ 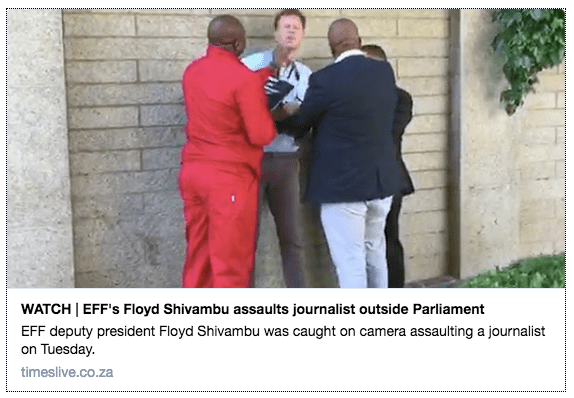 The incident, caught on video posted by Argus journalist, Jason Felix, shows Shivambu violently grabbing De Kock’s neck while two other men join in, holding on to the journalist.

De Kock said he’d asked Shivambu to comment on the current disciplinary hearing involving Cape Town mayor, Patricia de Lille. Shivambu told De Kock to delete the picture he had taken of the EFF leader. De Kock refused to do so, which was when Shivambu “started grabbing my camera… he tried to break my camera”, the journalist said in a News24 video after the incident.

The Parliamentary Press Gallery Association (PGA) said it was “appalled” by Shivambu’s actions. In a statement, the PGA said, ”Any journalist working in the Parliamentary precinct, on assignment and outside any restricted area, has the full right to photograph and ask questions of any public representative”.

It said De Kock had full rights to lay criminal charges against Shivambu and his companions.

No need to assault De Kock

“There was no need for Mr Shivambu to assault Mr De Kock. The PGA will be writing to the Speaker of the National Assembly, the Chairperson of the NCOP and the EFF asking for Mr Shivambu to apologise, for disciplinary action to be taken against him and his male companion,” the PGA said.

“Journalists should be free to do their work without being intimidated or attacked,” she said in a story posted on News24.

In the meantime, Shivambu has apologised for his actions, saying it was not an attack on media freedom. “As a loyal member of the EFF, I fully uphold media freedom and freedom of association, and the scuffle was not meant to suppress these constitutional principles,” he said in a statement.

“I regret the incident and believe it should have been handled differently. I take full responsibility and apologise for engaging in a scuffle with a person I discovered after the incident is a journalist.”

Shivambu said he was in a hurry to get to a Standing Committee on Finance (SCOF) meeting. He said De Kock was persistent in getting comment. “Whilst I was in a hurry to attend the committee meeting, I accept that my impatience with the gentleman was inappropriate,” said Shivambu.

DA shadow minister of communications, Phumzile van Damme, pointed out that the EFF is becoming aggressive towards media.

“Just last week, EFF Leader, Julius Malema, accused eNCA of being a platform which perpetuate white supremacy’. The attacks on eNCA have allegedly, according to the broadcaster, included threatening messages to its journalists,” she said in a statement.

“Malema also accused the SABC of allowing ‘whiteness’ to take over, after hiring a white journalist. The SABC is a public broadcaster, which caters for all South Africans across all racial and cultural groups. We commend it for head-hunting talent to join its ranks, and not be intimidated by the EFF’s racially-divisive bully tactics.”

The South African National Editors Forum, Sanef, said in a series of tweets that it was shocked by Shivambu’s attack on the journalist.

“Sanef condemns the incident in the strongest possible terms and is extremely disappointed by Shivambu’s actions. This type of intolerant behaviour is unacceptable in a democracy,” the organisation wrote.

“As a member of parliament Floyd Shivambu is entrusted with protecting our hard earned media freedom, and freedom of expression as is enshrined in our Constitution. He should lead by example and should champion journalists’ protected right to do their work without fear or favour.”

Sanef called on authorities to thoroughly investigate the complaint so that Shivambu can be held accountable for his actions.

“Sanef has repeatedly called on police to assist in this regard, but despite the numerous and often public attacks on journalists, to date no perpetrator has been brought to book.

The failure by authorities to prosecute these attacks on journalists allows for a culture of impunity to continue,” it said.

The Cape Town Press Club, in a statement, said while it noted Shivambu’s apology, in the interests of media freedom it cannot consider the matter closed.

“Mr Shivambu’s actions speak of an attitude of intimidation towards the Fourth Estate and  it cannot go unchallenged,” it said. “Mr Shivambu is an elected public representative and is expected to set a better example.  We urge Netwerk24 to pursue their complaint against Mr Shivambu further, and we trust that the Parliamentary Presiding Officers will discipline him for his actions.”

Surely @FloydShivambu such behaviour is way beneath you? Surely you don't want to prove right those who say the @EFFSouthAfrica is not a fascist party of hooligans? What about media freedom? //t.co/UM671Sua5s

One journalist just told me she is even scared of retweeting or commenting on this video because she is scared of being “victimized” at future briefings. Wow //t.co/UON8wGmM5O

No! This can never be allowed. Shame on you EFF and Floyd Shivambu. //t.co/Ql8YX3EmXo