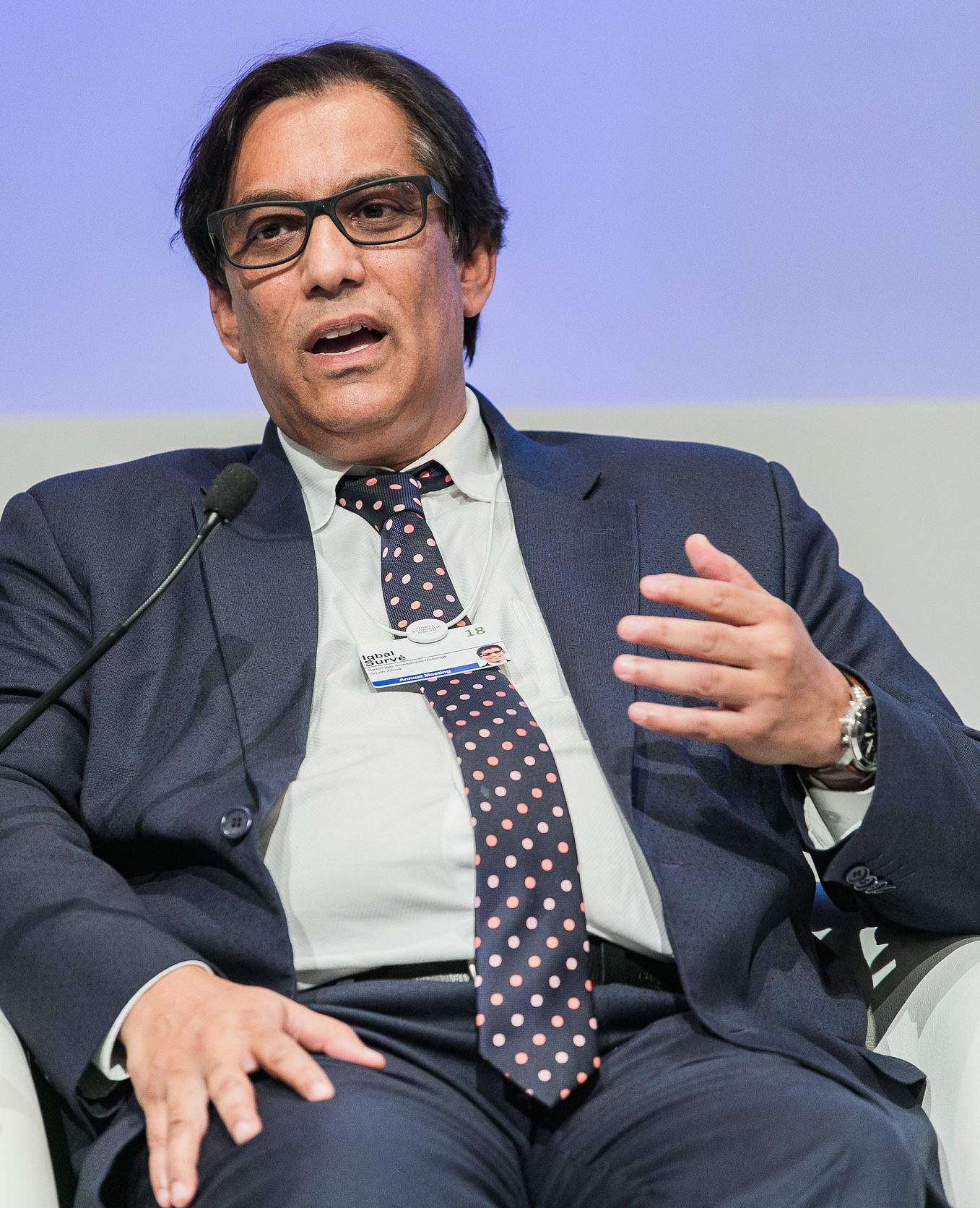 
Unless Sagarmatha Technologies manages to raise R3 billion by Wednesday morning, it will not list, as anticipated, on the main board when the JSE opens at 9am on Friday.

Sagarmatha is a company registered in 2013 and formerly known as African Technology and Media Holdings Proprietary Limited, launched by Dr Iqbal Survé (who owns 73% of it), owner of Independent Media. The intent, as laid out in a 212-page Prelisting Statement (PLS), is to absorb Survé’s media companies (Independent Media, African News Agency, Condé Nast magazines, the classified advertising and community media titles among others), as well as other entities such as Loot.co.za, Independent Online (IOL) and IOL Property into the new “multi-sided African platform technology group with aspirations to become the emerging market leader in the Fourth Industrial Revolution”.

It would knit “technology platforms; content creation and distribution and e-commerce into a consolidated value proposition aimed at attracting prime customers for monetisation”.  Many of the technology platforms are still in the planning stage and would only come into being should Sagarmatha manage to raise the initial R3 billion and then once listed, up that figure to R7.5 billion. The entity wants to list 1.2 billion shares, which is close on R50 billion in market capitalisation. The share price is pegged at R39.62.

This would ostensibly fund the technology platforms, repay debt to the tune of R1 billion (by no means the sum total of Independent Media’s debt), acquire a host of unnamed companies and open offices in Africa.

It didn’t take investigative journalism unit amaBhungane long to decode the extensive document and poke holes in the offering. Award winning journalist, Sam Sole (a major player in the #GuptaLeaks investigation and a man familiar with following both the money and the paper [or email] trail), described the potential listing as “Survé’s outrageous attempt to use other people’s money to plug the R2.3 billion hole in his media balance sheet”.

Sole reckons the Sagarmatha offering is designed to help Survé repay 50% of loans from “a Chinese state consortium and the Government Employees Pension Fund (GEPF), which funded his acquisition and development of Independent Media”. The Public Investment Corporation (PIC) facilitated the use of GEPF funds, resulting in a 25% stake in Independent Media. The China Africa Development Fund and China International Television Corporation took 20%. Survé bought the company, via his Sekunjalo Independent Media consortium (SIM), for R2 billion. A substantial chunk of the loan repayment is due in August.

“Just what a mess Survé has made of Independent is laid out in brutal detail in his prelisting statement,” Sole wrote. “The interim financial information disclosed by SIM reveals that, as of 30 June 2017, SIM had accumulated losses of R752-million and that the company’s total liabilities exceed its assets by R547-million. The figures include and reflect the financial state of Independent because SIM exercises control via its 55% holding.

“The prelisting statement discloses that SIM suffered significant losses every year of operation since Survé took over. It says the group’s revenue was ‘negatively affected’ by declining advertising sales and reduced margins on advertising.”

Yet Sagarmatha has placed great emphasis on advertising returns in the PLS. It promises, “Sagarmatha Technologies will have an opportunity to earn additional advertising revenue should the custom content solutions be distributed via its Branded Media, Digital and Video platforms”.

The ‘listing’ is a bit of a misnomer,” Sole told The Media Online. Usually when a company lists, a whole bunch of shares are offered and the public can buy them. The Sagarmatha listing is a ‘private placement’ offering, which is a method of raising business capital through offering equity shares and private investors.

Independent Media, following publication of Sole’s analysis, headlined ‘Iqbal Survé’s mythical beast’ in the Daily Maverick on Saturday, published a response slamming Sole for not telephoning or sending an email to establish the facts. It questioned his credentials as a financial journalist

[In an aside, on reading the PLS, The Media Online immediately sent questions to Independent Media’s communicators so as to establish the facts, but even after responding that it would answer our questions, failed to do so. Questions were sent prior to the closed period. After that, we were directed to the PLS, the same document Sole used in his analysis.]

In it’s response to Sole, Independent Media (there was no author attached to the piece), called into question journalism ethics in South Africa, said other media were “fighting for their existence” while Sagarmatha had “identified the future of media and have constructed a Multi-Sided-Platform (MSP) that will make traditional media houses, obsolete”. It said, “An untransformed media landscape still exists in this country, so there is a lot riding on Sagarmatha’s listing. It will change the face of media in South Africa and the continent, forever”.

A question of valuation

It said Independent Media had now “grown in value due to what Sekunjalo has put into growing the technology platforms that underpin Sagarmatha Technologies. Sekunjalo has funded these improvements for the benefit of all the investors and shareholders and, for the employees who work within these structures”.

Talking valuation, Sole reckons that even with Sagarmatha Technologies’s “extravagant R392 million valuation, the prelisting documents show that SIM’s debt still drowns the combined entity, leaving it with a negative valuation (minus R303 million) or minus 30c per share for each of the one-billion shares in issue”.

The JSE says Sagarmatha has met all listings requirements. Andre Visser, general manager of Issuer Regulation at the JSE, explains the JSE’s methodology. “We would ensure that the expert providing the valuation meets certain minimum requirements. This would entail making sure the expert has the necessary expertise and experience in providing valuations in a similar industry. Further to this, we would ensure that the valuation report included in the listing document contains certain minimum information. You will note from the valuation report that it was provided and included in the document at the request of the JSE,” he says.

Why try and sell at such incredible valuations?

But Dirk de Vos, CEO of QED Solutions, a boutique corporate finance and advisory service with expertise in the technology and electronic media sector, also questioned the valuation.

“If you are going to do a book building exercise (i.e. set a price), why try and sell it at such incredible valuations? Nothing supports the purported valuation and it just makes them look amateurish/silly and draws all this unfavourable attention. A more modest valuation (arguably) might have solved the debt repayment problem but this is just ridiculous/absurd,” he reckons.

De Vos wondered how and why the Chinese investors had “accepted all this”.

“Is there another deal that we don’t know about where the Chinese can recover their position? What was the motivation for them becoming involved in the first place?” he asks.

De Vos, like Sole and many other financial journalists (and political parties), want details on the role of the PIC in all of this. (The Media Online sent questions to the PIC, but it failed to respond.)

“Will they subscribe/buy the shares to enable them to be repaid?” De Vos asks. “Can’t believe they can after all this exposure. But will they? If they don’t, Independent Media will hit a wall and go bankrupt. I reckon ANN7 and The New Age will be bust by June. So odd that we face the prospect of two politically motivated media investments (funded by the public sector under the influence of their respective political masters, namely the Zuma-driven ANN7/TNA and the older but now revitalised ANC-driven IM bite the dust within months of each other.”

Friday the 13 April, is the day the media and business sectors will find out just what will happen to this listing, but the results of the private placement will be announced on Wednesday.

The Black Business Council (BBC) has invested in six million shares, worth R240 million, via its investment company, BBC Capital. “This is certainly a noteworthy accomplishment as we have not just invested in a black business but strategically positioned ourselves favourably on the growth trajectory of the ICT sector with the industry leader of choice,” it said in a statement.

“The successful conclusion of this transaction is bigger than just participating in an economically fruitful opportunity, it is the BBC’s signal to the monopolies that we as black business are more than just commentators of transformation, but also meaningful players in the economy with the clear intention to demonstrate transformation and the power black excellence,” it added.

The BBC weighed into the Sagarmatha Technologies listing, saying since the announcement was made, there have been “sustained attacks from detractors of Independent Media, in particular Tiso Blackstar, the owners of Business Day and Daily Maverick [The Daily Maverick is an independent title and is not owned by Tiso Blackstar. Editor].

“The nature of these attacks are anticompetitive that serve to only promote an anti-transformative narrative that is designed to keep a significant part of the economy namely, media and ecommerce, in white hands and continue to prohibit the entrance of black people into the mainstream economy,” the BBC said.

The BBC said the “concerted attack against a black owned business is the reason it is difficult to have an inclusive economy”, accusing Tiso Blackstar of utilising “desperate weak tactics were very evident where Tiso Blackstar group decided to dedicate a full-page article on Sagarmatha, as well as a quarter page in the company section of their publication, without even affording Sagarmatha Technologies or Independent Media the opportunity to provide comments”.

The BBC said this was “an outright display of the abuse of powers and practice of unethical journalism”, adding that this was a “feeble attempt to stall the listing, as desperation by the white media house against a black company”.