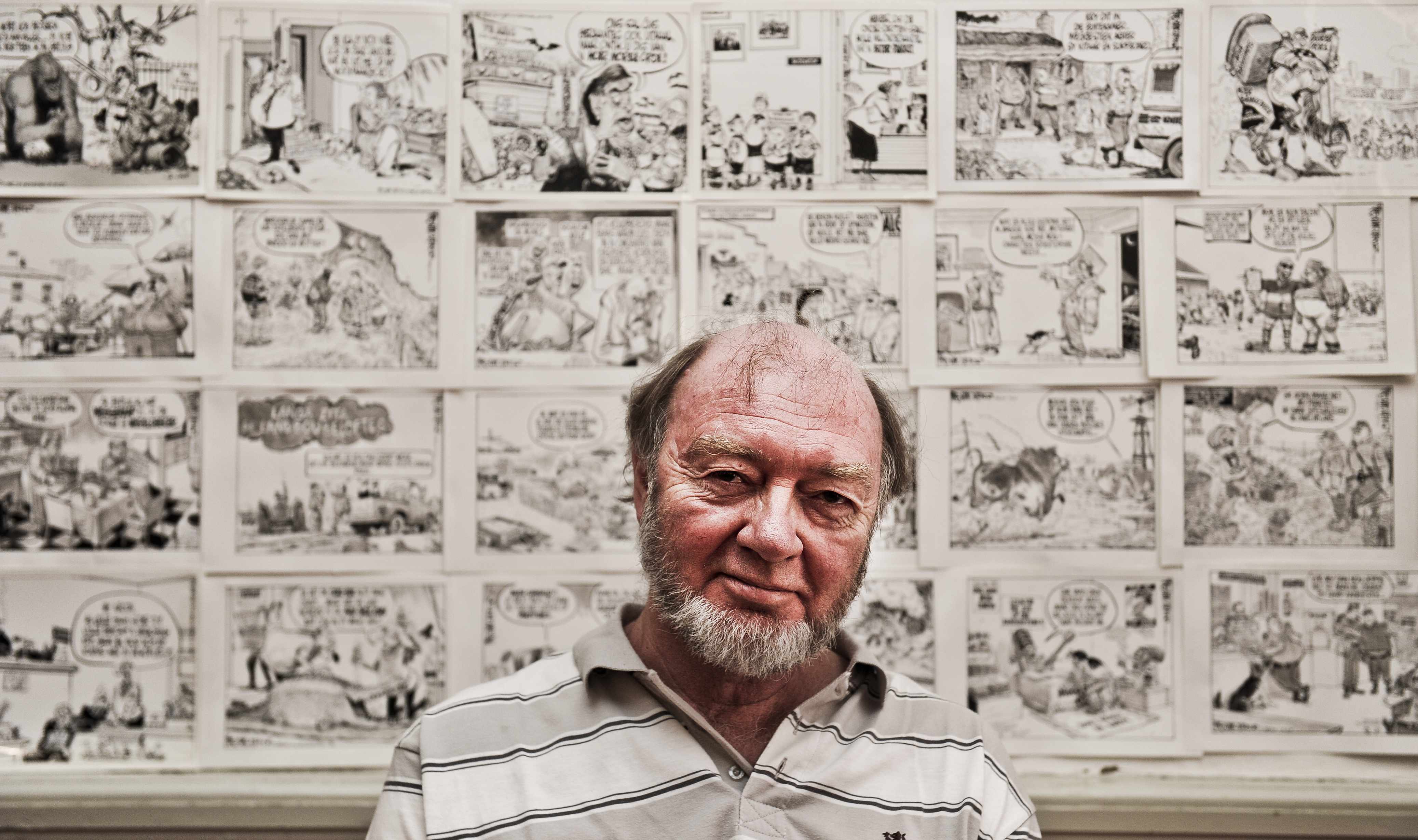 [*Story updated at 12:18] With work that gets people thinking, entertains them, and stirs debate, cartoonists should be highly valued. But sadly, they are not.

Cost-cutting measures by South African print media houses are having an impact on cartoonists, as their work – often seen as ‘non essential’ – is one of the first items to go. This has forced cartoonists to explore digital avenues not only to exhibit their work, but to also continue to make a living.

Jonathan Shapiro, better known as Zapiro, describes the way South African print publications treat cartoonists and their work as “a mixed bag”. Some don’t give weight or credence to cartoons, while others highly value them. 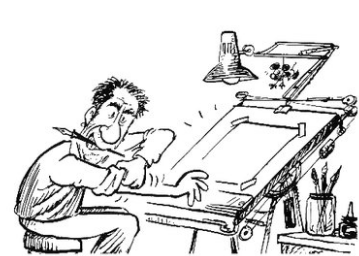 “Printed media are battling with where to go and how to cut costs. And often, not just in South Africa, cartoons and cartoonists are among the first to go during cost-cutting measures,” he explains.

But this is not just a trend happening in South Africa. Zapiro attended the American Association of Editorial Cartoonists’ annual meeting in 1989, and back then cartoons were very strong even in small US newspapers. No matter the content, they were highly visible. He returned to the country to attend the same meeting almost two decades later, in 2007, and found “the attrition happening because of online was enormous with many cartoonists having lost their positions in mainstream newspapers”.

Cartoonists being pushed out

Zapiro believes several veteran South African cartoonists have been treated very shabbily by some print publications. This happened to him recently, leaving the Sunday Times after two decades of working for the publication. He says he was “pushed out” and believes the owners of Tiso Blackstar “are not valuing some of the important aspects of the Sunday Times, and some of the other print publications in the stable, that have been the ethos for the papers for a long time”.

According to Zapiro, he was told his contract was expiring and would not be renewed due to a new policy of exclusivity. Because Zapiro also works for the Daily Maverick, he was ousted. He is not convinced either of these reasons are valid.

But Tiso Blackstar Group says cartoonists are highly valued by the group. While Zapiro may no longer be working for them, another example is award-winning cartoonist Brandan Reynolds, who has been drawing for Business Day since October 2002. His work also features daily on the editorial page since January 2003 and he is also published each week in the Sunday Times Business Times. Reynolds won the Standard Bank Sikuvile Award for editorial cartoons last year.

“We’re still a developing country and printed publications are part of the furniture.​ Print media will never die out. It will simply become niche. And then when hipsters find digital media is too mainstream, printed media will become mainstream again,” he explains.

Having said that, Jerm (who has worked for a number of print publications over the years), has in the last couple of years deliberately tried moving away from print media and more towards digital media.

“My first love is digital. The overwhelming majority of my work is now done for, what I refer to as, alternative media. Which would include organisations and groups wanting to communicate a message through channels like social media and newsletters and so on.

“Years ago, when I realised that most newspapers were dwindling in numbers and already had a cartoonist, the only way I could find work was to go online. I was one of the first South African cartoonists – if not the first – to make a living from publishing cartoons only online.”

He also touts the benefits of distributing cartoons on Facebook, saying more people read Facebook than all printed media combined.

Similarly Zapiro has also predominantly moved his work online, now cartooning for the Daily Maverick. Many cartoonists, particularly the youngsters, have also had to go this route.

“Some of the young cartoonists have not really even experienced what it’s like to work for a print newspaper and they’re finding their own areas in the digital world to publish their work,” explains Zapiro.

Some are playing in both spaces, as they work for publications that have both a print and digital platform, with the same cartoon generally being distributed across both.

“We’ve been highly valued by society, but less valued by the publications or media houses that pay us,” comments Zapiro. “I believe digital is one area where cartoonists have been underpaid, even for really good cartoons.”

It’s also a question of volume of work. Some cartoonists have to churn out huge numbers of cartoons in order to make a living, while others have specialised with editorial cartoons and been able to make a living on less.

But the big question that needs to be asked is whether cartoonists are making any sort of proper income by working exclusively online.

From a publications perspective 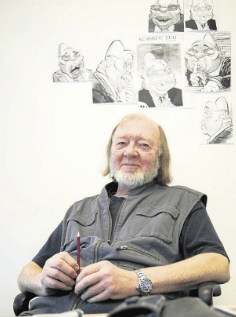 “Fred is one of Die Burger’s biggest assets. Through his cartoons it is often possible to make a political point in much stronger terms than through the words of the editorial lead. I am often amazed at how easily he varies between the hard hitting political cartoon or caricature to scenes full of atmosphere and the texture of ordinary life,” says Willem Jordaan, editor of Die Burger.

“For our readers, Fred’s cartoon is part and parcel of Die Burger’s unique character and tone of voice. When he is on leave and we publish a photograph instead of the cartoon, the calls, e-mails and SMSs immediately stream in: ‘Where is Fred?’; ‘My day is not complete without Fred and the mouse’; ‘Come back, Fred. We miss you’,” he adds.

Mouton’s work also appears in the digital world, as Die Burger’s landing page on Netwerk24 hosts a “golden oldie” from him. “These cartoons from the archive are extremely popular amongst readers and often amongst the biggest drivers of traffic on our page,” explains Jordaan.

While most cartoonists don’t receive any formal training, a measure of the industry’s health is often the number of new people coming through. With digital opening up the industry, many more cartoonists are emerging and new styles are also starting to show. The Supa Strikas, while not a traditional cartoon, is an example of this.

But Jerm is more negative about the situation. “There are many cartoonists. The problem is that a lot of them are crap, and the good ones are few and far between. I’ve met some brilliant cartoonists, but it depends on the genre of cartoon. It’s akin to music; are you referring to jazz or pop? In South Africa, political cartooning is the dominant genre, and it’s the one in which a cartoonist is most likely able to make a living. And while a number of cartoonists might be skilled at drawing, their writing skills are lousy. Which is why, in some instances, cartoonists work with writers. EWN, for example, has a writer and a cartoonist.”

Jerm has a hypothesis as to why a lot of South Africa’s political cartoonists are subpar. “Africartoons, which began around a decade ago, used to be a superb repository of South Africa’s mainstream political cartoons, and prides itself on gathering the latest cartoons from around South Africa (posted daily to their Facebook page) and bringing together the said cartoonists (and fans) via various social events, exhibitions, debates, and so on,” he says.

But Jerm reckons an element of intolerance of different idealogical views has come into play, which has impacted on the quality of the cartoonist’s art. [Ed: That’s a story for another day, watch this space!]

The value of cartoons

Whether distributed through print or online, there’s no question that cartoons add value.

“Cartoons add an enormous amount to people’s understanding of issues, their entertainment, and to the debates around the important issues of the day,” adds Zapiro.

*Story updated to include information about Sunday Times’ cartoonist, Brandan Reynolds. The Media Online apologises for the omission.