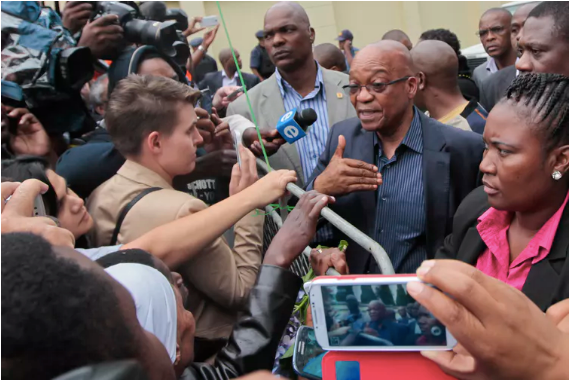 Journalists must do more to empower citizens to deal with corruption. DAI KUROKAWA/EPA


The mainstream media can play an important role in fighting corruption. Investigative journalists in South Africa, for instance, helped to expose how the politically connected Gupta family ‘captured’ elements of the governing African National Congress.

As watchdogs of society, the media is well placed to forge social accountability: the collective effort of citizens and civil society in holding governments to account for their management and use of public resources. These groups need to be informed if they’re to succeed.

There are two ways for the media to fulfil its social accountability role. The first is through good investigative journalism. This, as scholar Professor Sheila Coronel has written

exposes not just individual, but also systemic failures. Investigative reports show how individual wrongs are part of a larger pattern of negligence or abuse and the systems that make these possible.

The second is that the media should function as a bridge between governments and citizens. It can provide the public with the information they require to debate and participate in public discussions and processes. This notion is much more aligned to the media’s role as a space for debate and engagement by citizens regarding public and political life. Here, journalism’s function is educational. The public is in the driving seat – but only if they’re a well informed citizenry able to participate in decisions about how public resources are managed.

So how is South Africa’s media doing when it comes to fulfilling this second role? Not very well, according to research conducted for the Public Service Accountability Monitor at Rhodes University. The accountability monitor forms part of the School of Journalism & Media Studies and aims to ensure the right to social accountability is universally realised.

Our findings reveal gaps in the media’s work. Journalists assume that merely reporting on scandals, corrupt officials or maladministration justifies their role as watchdogs. Instead, mainstream print media coverage on service delivery and public resource management normalises corruption because it reports in an episodic fashion, focusing on events rather than systemic failures.

The Eastern Cape is a troubled province. It’s home to 7 million people and is the poorest in South Africa. It measures badly against almost all metrics. More than half of the province’s schools have no water; 73% have no proper toilets. None of this information is unknown: there are daily stories in the press about the poor state of education in the province. Blame is apportioned and fingers are pointed. But little changes.

The research conducted by Public Service Accountability Monitor looked at coverage of education in the Eastern Cape by mainstream print media between 2005 and 2016. The articles analysed provide a glimpse of the type of “balanced” and episodic reporting that proliferates South Africa’s mainstream press.

Rather than connecting incidences of corruption or maladministration to citizens’ daily lives, the coverage simply alerts readers to the event with no context and no clear lines of accountability. This is inadequate for providing citizens with the information they require to become active participants in holding public officials in the education sector to account.

Instead, coverage of maladministration follows a formulaic pattern: an event is reported and a government official is asked to comment. There’s little or no investigation of how this maladministration was allowed to occur and how it will be prevented from happening again.

This type of coverage also normalises corruption and public resource management crises in the public sector. This is because it reports on these issues in much the same way as it reports other events, producing journalism which fails to act as the fourth estate because it fails to hold public officials to higher standards than other citizens.

The media needs to help people understand that poor service delivery is a result of systemic weaknesses. And these weaknesses result from the way in officials handle resources that actually belong to the public. The stories in our sample lack depth, context and a critical understanding of the way in which individual events are related to a bigger system of public resource management.

For example, when reporting on education infrastructure – the kind of problem
that can result in learners being hurt or even killed – the coverage is consistently about the event. Journalists writing the articles fail to ask why a department with infrastructure problems consistently under-spends its vast budget.

More importantly, who is responsible for such under-spending and mismanagement? Journalists fail to understand where weaknesses in the public resource management system are resulting in maladministration, lack of service delivery and corruption.

So how can the media’s contribution towards its role as a “bridge” between government and citizens be strengthened?

One strategy proposed is to build better relationships with civil society organisations that have spent years developing expertise in the area.

Why not draw on the voices of civil society? These are the groups implementing advocacy programmes, conducting research and engaging at a deeper level on how to improve public resource management and curb corruption.

Both the media and civil society need to rethink the way they understand their roles when it comes to social accountability – as well as their roles in relation to each other. By drawing on the strengths of both civil society and the media, the potential for social accountability practice, and through this greater service delivery, can be improved.