Posted By: Steven Rosenbaumon: May 16, 2018In: Broadcasting
Print Email 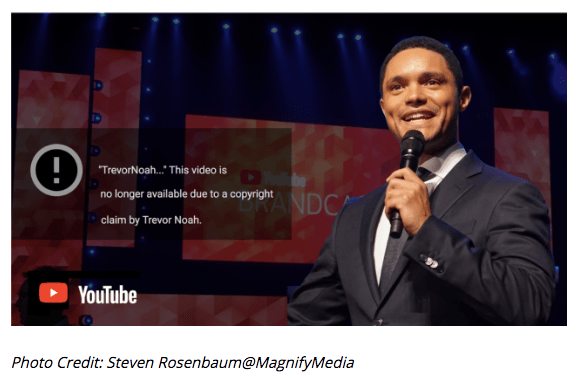 This is one of those stories that starts as a weird mistake, then evolves into a real screw-up, and ends as a looming threat to freedom and journalism. The trip is surprisingly short.

It begins with my argument with 4noahyou@gmail.com. Let me be clear – that could be a robot, an offshore troll, a Viacom content farm, or Trevor Noah’s personal email. I have no idea since 4noah doesn’t respond.

But I’ve gotten ahead of myself.

Last week, I was invited by the head of YouTube public relations to attend the company’s annual event, Brandcast. I arrived at Radio City Music Hall with 4 000 advertisers, agency people, journalists, and a few hundred fans. It was a good show, and I wrote about it here.

I recorded a video clip of of the Comedy Central host Trevor Noah giving what was a sharp and funny rebuke of President Trump. It was a rare political moment for the otherwise pretty middle-of-the-road event. I filed my story and went to bed.

When the email came from YouTube notifying me that my Trevor Noah video had been taken down for “copyright violations,”  I have to admit, I laughed out loud. I was sure it was some robot run amok.

Then I pinged the email address that had issued the takedown: 4noahyou@gmail.com.

Over the next four days, I pinged it twice. YouTube PR wasn’t able to get the video back up, either. They advised me to file a counterclaim through their automated system. I posted a tweet to Noah on Twitter. Then I called Comedy Central PR. They seemed baffled and annoyed.

YouTube’s copyright system works like this: If you claim a video infringes on your copyright, YouTube sides with the accuser and removes the video. Then, it’s up to the accused (me) to fight it, file a counterclaim, and wait for weeks while the accuser gets to decide if they want to back down.

Meanwhile, my YouTube account gets a “Copyright Strike” and a severe warning. The best way to avoid “strikes” is to not upload “copyrighted” material.

Ok, sure. But, as there were 4 000 people in the room, most with camera phones, and hundreds of journalists, how exactly is this a copyright violation?

“This incident demonstrates the problem with automated takedowns, which often effectively exercise private censorship” says Patricia Aufderheide, professor at the School of Communications at American University and the coauthor of Reclaiming Fair Use. “People who are legitimately employing their fair use rights can find themselves frustrated and even intimidated.”

As a journalist on deadline trying to publish something relevant and timely, what should I have done? Did I need to get the permission of each presenter on stage directly? Does my claim of fair use, as a journalist working in the news business, give me the right to publish without fear of “strikes” or restraint?

And does YouTube’s copyright notice and takedown system end up siding with those who aim to silence free speech?

Here’s what’s so disturbing about this. Trevor Noah says things about Trump on TV every day. I wasn’t exposing any secret or controversial bit of spoken word comedy. And YouTube absolutely wanted the event covered – that’s why I was invited. No one, not Comedy Central, not YouTube – and, I suspect, Noah himself – knows why this was taken down.

The YouTube system will make the clip live again in three months if the claimant doesn’t respond. But for reporters, three months is a lifetime.

Automatic takedowns of timely, relevant, and even controversial news, amounts to a system that biases itself in favour of prior restraint, making the journalist guilty until proven innocent – or irrelevant. It’s time to put these systems and robots back in the box they came from.

Hey, 4noahyou@gmail.com, I’m waiting to hear from you.