LATEST NEWS
Home Digital Why do we stay on Facebook? It’s complicated

Posted By: Kathryn Jezer-Mortonon: May 03, 2018In: Digital
Print Email 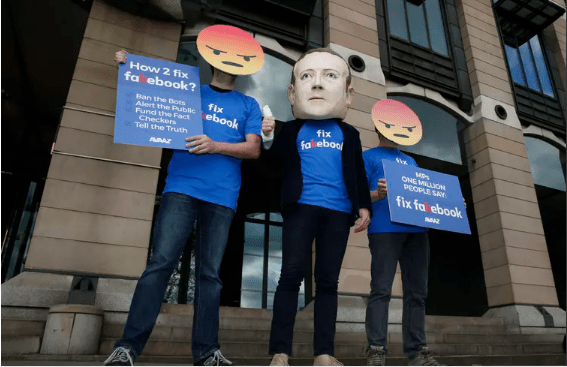 A protester wears a mask with the face of Facebook founder Mark Zuckerberg, in between men wearing angry face emoji masks, during a protest against Facebook in London in April 2018. (AP Photo/Alastair Grant)


Lately I can’t log onto Facebook without being asked to consider my own motivations for using the site.

As a researcher who focuses on online communities, I’m accustomed to this running meta-narrative about what it is I’m actually doing online — but usually, that narrative plays inside my head, not all the way down the feed I’m scrolling through. It’s like my research questions have sprung to life these days: What’s Facebook all about, anyway? Is this even fun? If it’s not fun … what is it, exactly?

This is an exciting time in the very short history of social media use.

Facebook’s users are becoming critical of the systems into which they’ve been conscripted. This is an important moment: Will public opinion follow the same well-worn cycle of outrage and acceptance, or will it jump the tracks and begin engaging Facebook on new, more challenging terms?

Researchers have been asking tough questions about Facebook for the past decade, but even armed with the most prestigious credentials, they pose a much smaller threat than educated consumers. And without consumer outrage, government regulation seems unlikely to move forward.

So far, at least in my own feed, the same old script is being followed to the letter. The soul-searching is punctuated by passionate cris-de-coeur from the feed’s more opinionated characters: Wake up, sheeple! If you’re not paying for the product, you are the product — remember? Quit Facebook! Encrypt your data! Smash your phone under the heel of your steel-toed boots!

Next, right on cue, the incisive social commentators swoop in to remind us that these calls are coming from inside the house. “Pretty ironic that you’re posting all this stuff on Facebook!” To which everyone silently rolls their eyes in resignation. Cue the gallows humor about how we’re all under constant surveillance, rinse and repeat. The human condition’s same old two-step. Sound and fury, signifying nothing.

That this discursive cycle was triggered by the revelations earlier this year that voter profiling company Cambridge Analytica obtained the Facebook data of 50 million American accounts is beside the point.

This is only the latest in a long series of such leaks about data mining. In 2017, approximately 200 million registered voters’ personal data stored by voter profiling company Deep Root Analytics was accidentally made public. The previous year, Russian hackers accessed a large cache of voter information owned by the Democratic National Committee.

What this latest go-round is revealing is that these are industry practices that will carry on undisturbed, regardless of what Mark Zuckerberg says or does. This is not a Zuckerberg problem anymore; it’s a problem with an advertising model that is the industry standard.

Most of us Facebook users have been on the platform for about a decade, and perhaps our outrage is our growing pains.

We’ve gained some critical distance through time spent on the platform. We are less easily distracted by the ostensible fun the platform offers. And we appear to be compelled to ask questions about Facebook we’ve never asked before.

Read more:
It’s time we demanded the protection of our personal data

Fenwick McKelvey, co-director of the Media History Research Centre at Concordia University’s Milieux Institute for Art, Culture and Technology, wishes that the media would start asking different questions about how data is being used by platforms like Facebook.

“The media narrative still assumes that the goal of these platforms (like Facebook) is to expose people to information,” McKelvey told me. “But it’s less and less about that — the goal is to manage and control people’s behaviour.”

Among the urgent questions media commentators should be asking, McKelvey believes, is how online advertisers are deploying user data to subtly nudge people. He provides the illustrative example of SnapChat — a company with relatively strong privacy settings in place — that leaks data to advertisers with dizzying granularity that reflects the industry standard.

Through SnapChat’s protocols, your phone informs advertisers how much time passes between the moment you’re served one of their ads and the moment you make a purchase at their business, either online or in person.

Every time you walk into a retailer with your phone’s location services on, you are leaking data about your consumption habits.

Perhaps we should be burrowing even deeper into Facebook’s business practices.

Facebook tends to rely on the fact that most of its data collection practices are laid bare in its terms of service. But according to Martin French, an assistant professor of sociology at Concordia, Facebook’s notion of “consent” is flimsy at best.

Most unaware of how their data is being used

“Facebook reportedly changed its policies after 2015 to stop app developers accessing information on app users’ network. But for me the question is: Are Facebook users, in the real world, actually aware of the changing ways their data is being used, and the policies that purportedly govern these uses?” wonders French.

French posits that based on research that has been done on who reads and understands social media privacy policies, most users are unaware of how their data is actually being used. The “consent” that Facebook is talking about when they refer to an agreement with their users is not really a kind of consent that conforms to any dictionary definition of that term.

The consensus among social scientists who study life online is that whatever dynamics play out online have offline analogs.

We’ve had a decade to incorporate Facebook into our lives, and like any learning process, our success with it has been uneven.

We’re at a critical moment as users of Facebook. It’s our responsibility to educate ourselves about the implications of our participation. Deactivating our accounts won’t change how our personal data is valued to advertisers.

But perhaps, as we become mature users of social media, we can begin to demand that limits be set on how and when our data is bought and sold.