Mandela media moments taking place across SA, and the globe 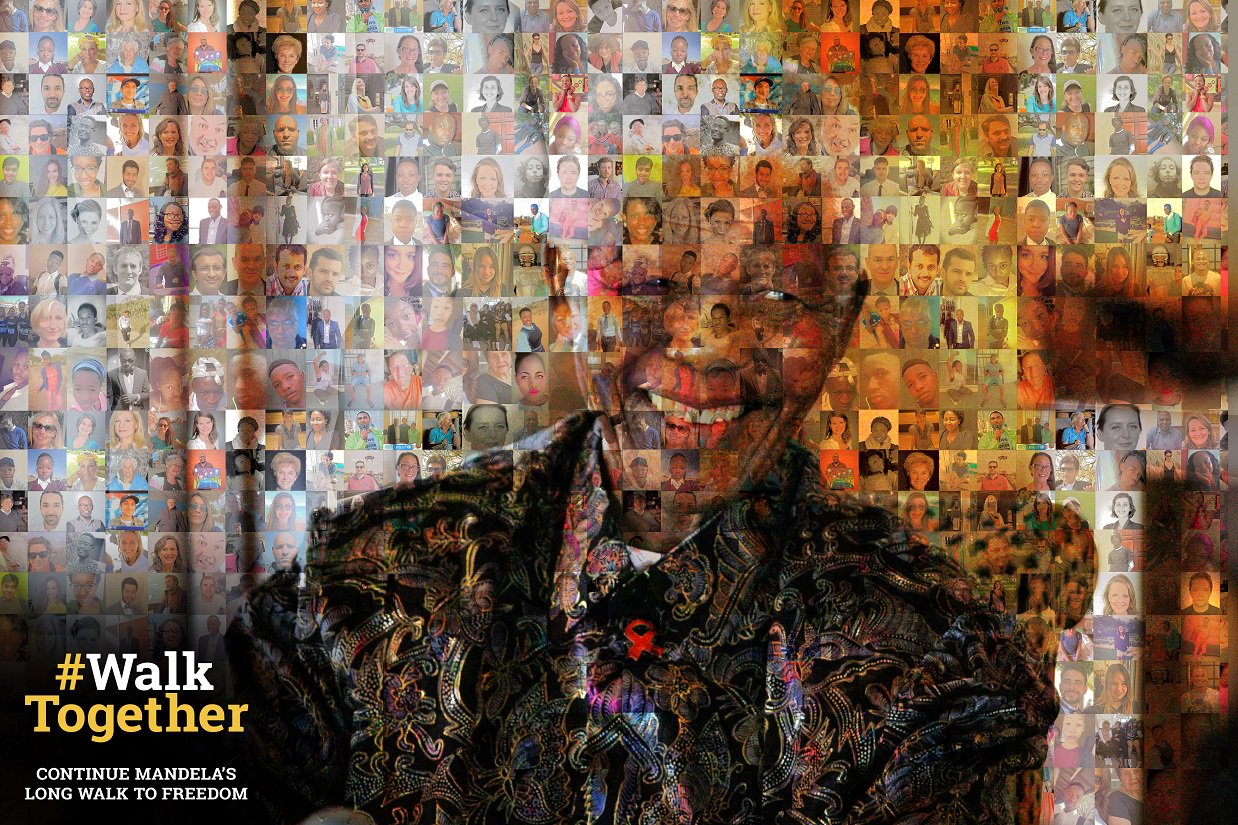 
It would be hard to top Barack Obama’s extraordinarily rousing Nelson Mandela Lecture delivered to a rapturous live audience, and millions more on TVs across the world.

“Many developing countries now are looking at China’s model of authoritarian control combined with mercantilist capitalism as preferable to the messiness of democracy. Who needs free speech as long as the economy is going good? The free press is under attack. Censorship and state control of media is on the rise. Social media – once seen as a mechanism to promote knowledge and understanding and solidarity – has proved to be just as effective promoting hatred and paranoia and propaganda and conspiracy theories,” he said.

And he added, “So on Madiba’s 100th birthday, we now stand at a crossroads – a moment in time at which two very different visions of humanity’s future compete for the hearts and the minds of citizens around the world. Two different stories, two different narratives about who we are and who we should be. How should we respond?”

It’s a big question. How it will be answered is dependent, to a large extent, on us, the people. Can we find it in our hearts and minds to take the high road? In the meantime, on Mandela’s birthday, citizens and companies across the globe are honouring him in various ways. 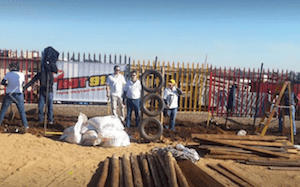 Hot 91.9FM has a couple of big treats in store for the children of the Hlalisekani Playgroup in Kya Sands. The kids have been taken off for a day at the Johannesburg Zoo, but back at their premises, magic is happening…

“We are hard at work at the , building a few important structures and changing the lives of the teachers and most importantly the children in special way! Follow our amazing journey, as we embrace the spirit of Madiba!” Hot Cares posted on Facebook.

The teams aren’t only rebuilding the entire playground for the children, but they’re also creating a sustainable veggie patch for the Hlalisekani Playgroup, giving them the ability to sustain themselves as well as contributing to their community.

Jacaranda FM does iPads and pads

“It is unthinkable that something as basic as access to sanitary towels can still have such a devastating impact on the future of thousands of South African girls – but it does,” it said, inviting the public to participate in its Mandela 100 project, Keep a girl child in school for 6 months – donate R67.

PowerFM is cleaning rivers as part of the #ClearRivers18 movement. “We start our pledge to #ClearRivers18 in Soweto where we are taking up the call to take care of the environment. Join us in stopping illegal dumping and keeping your rivers clean,” the station said via a series of Twitter posts. It highlighted a Mandela quote, “Our people are bound up with the future of our land. Our national renewal depends upon the way we treat our land, our water, our sources of energy, and the air we breathe.”

A challenge to business to sponsor 67 bright entrepreneurs

To coincide with Mandela Day,  the Red & Yellow Creative School of Business is challenging  corporates, patrons of education and successful SMEs to help empower no less than 67 young, bright and budding entrepreneurs – poised for greatness, while lacking the financial means – with the skills, knowledge and know-how to turn great ideas into successful businesses.

On 30 July 2018, Red & Yellow will launch a truly revolutionary, blended-learning Entrepreneurship in Action 10-week online course. A course specifically designed to give young entrepreneurs and small business owners the tools and insights they need to build sustainable businesses and become employers in their communities. For every deserving student sponsored, Red & Yellow will match it with another.

“It is no longer enough to just give 67 minutes; South Africans need to do more if there is going to be a meaningful change,” said Wesley Fredericks, Red & Yellow MD. “Being in the education industry, I can say with confidence that Mandela was right – education is the most powerful weapon we can use to change the world.”

67 Logos for 67 small businesses and entrepreneurs 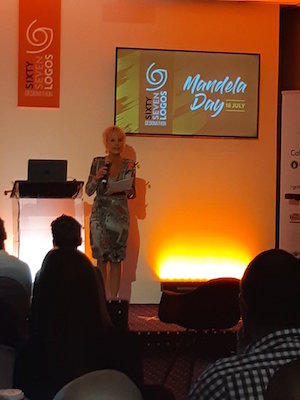 Staying on the topic of small business, another noteworthy project that is helping small business and entrepreneurs is 67 Logos, the brainchild of Colourworks Lesley Waterkeyn. “What if a team of designers could create the foundation for SMEs in this country to kick start their businesses into full gear with uniquely crafted logos and brand collateral at no cost to the fledgling companies?” And so the project was born; 67 designers masterminding 67 logos – including mini visual identity (containing logo variants, fonts and colours), a business card and email signature for 67 small South African businesses in dire need of the brand and marketing material required to get their companies off the ground in the most professional way possible.

Today, they handed over R2 million worth of design work and brand collateral handed over to 67 high impact SMEs. 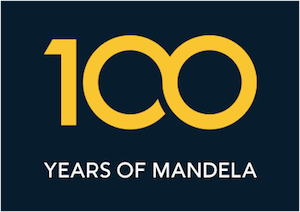 Speaking of logos, the Nelson Mandela University in Port Elizabeth recently underwent a massive rebranding of all its brand architecture, which was undertaken by Creative Caterpillar. One of the strands of the project was the design of a special centenary log for the university institution.

CEO of Creative Caterpillar, Albert Engelbrecht, said, “Just like Madiba’s favourite, colourful and intricately patterned shirts, good design is tailor-made. In the same way, we crafted the 100-year logo for the Nelson Mandela University in Port Elizabeth specifically to celebrate his mentorship and wisdom, which will continue to guide in future as we try and change the world… for the better.”

The thinking behind the logo was to reflect the infinite legacy and wisdom of Mandela. “The logo emulates the numbers ‘100’ and ‘18’, which is representative of Nelson Mandela’s date of birth,” said Engelbrecht. “His legacy is infinite therefore the zeros in the ‘100’ also resemble an infinity symbol. Nelson Mandela’s values and qualities continue to lead many individuals. Having the infinity element incorporated into the logo signifies a continual move towards a sustainable future and his continued vision to change the world.” 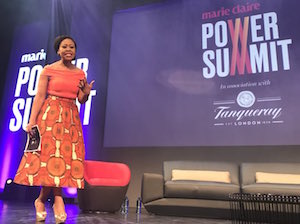 Marie Claire magazine is hosting its first ever Power Summit on Mandela Day under the Nelson Mandela theme, Be the Legacy. The inaugural event, with the Nelson Mandela Foundation and sponsored by Audi, brings together a host of incredible women leaders, trailblazers, creatives and influencers from across Africa and abroad to share knowledge, wisdom and power. With Redi Tlhabi as teh MC, and attended by women such as Tumi Voster, Nomzamo Mbatha, Terry Pheto and Lindiwe Mazibuko, the event is tackling everything from gender equality and career advice to activism, this event will cover a wide range of topics geared at personal advancement. 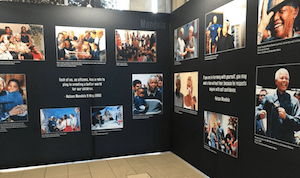 Back in Cape Town, it’s the BRICS Media Forum which has brought together over 180 delegates from Brazil, Russia, India, China, South Africa, as well as other countries across the African continent, the Forum will celebrate the centenary of the late, Nelson Mandela by looking at what it takes to create an inclusive and just, world order – through media. Part of the Summit is a photo exhibition with a theme that asked photographers to reflect the spirit of Nelson Mandela – his life and works – through one of his famous quotes: “What counts in life is not the mere fact that we have lived. It is what difference we have made to the lives of others that will determine the significance of the life we lead.”

Curator of the exhibition, Ian Landsberg, said it had been “an eye-opening and deeply introspective experience selecting the works that portray the spirit of co-operation and cross cultural exchange and learning that promote a better and more integrated world. The interpretations are broad and thought-provoking, and I believe that visitors will gain a different perspective on what it means to ‘make a difference’ in different parts of the globe”. It is on at the CTICC until Friday after which it will tour South Africa. 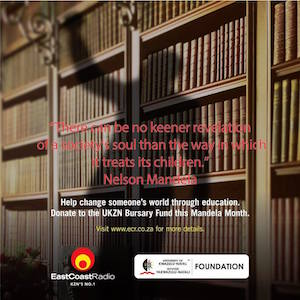 East Coast Radio has teamed up with UKZN to mobilise the people of the KwaZulu-Natal to assist underfunded students complete their studies by donating as little as R67 this Mandela Day.

The station pointed out that despite having secured bursaries for a number of students, there are still around 7500 academically deserving students at UKZN that remain unfunded.

East Coast Radio will broadcasting live from the UKZN’s Westville campus from 6am till 3pm on Mandela Day to encourage the people of the province to give generously in the spirit of Nelson Mandela. 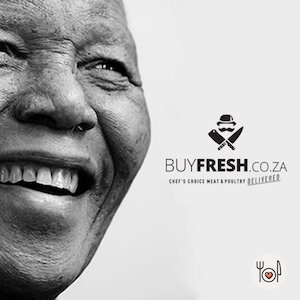 Buyfresh, which gives consumers the chance order quality, affordable and ethically sourced meat and poultry products directly to your door, has pledged to donate 67kgs of meat to FFSA, #PlusOneMore kilogram for every order placed on its online store in July. “The 67kgs is in lieu of Mandela’s 67 years of trying to make the world a better place. We are determined to take his legacy and continue to make a difference,” said founder Asher Stern.

“We are proud to be working with FoodFoward SA, a national NGO. To date, we have already donated over 100kgs of meat to those in need (which estimate had helped to feed over 1000 people). We are extremely proud of this achievement in such a short amount of time and look forward to continuing to make a difference.

Big Box Containers, a South African company that specialises in container sales, rentals and conversions, has partnered with SA Cares for Life and radio station GROOTfm in a project in which teams from eight different companies have joined forces to paint eight shipping containers, which will become a much-needed crèche in the informal settlement, Woodlane Village – commonly referred to as Plastic View – in Moreleta Park, Pretoria.

Willie Mouton, a director of Big Box Containers, says the company got involved after he was approached by GROOTfm’s marketing manager, Luané Janse Van Rensburg. “I was driving in a Big Box branded bakkie and this woman came running after me. I was quite concerned as I thought she’d been injured, so I immediately stopped. It was then that she handed me a business card and told me they needed a sponsor for the containers.”

The eight containers, valued at R282 000, have already been converted by Big Box Containers. To be suitable for use as a school, however, they need to be insulated, which is expensive. Two other sponsors, SSG Consulting and ATTBuild, have donated R100 000 each to cover the costs. 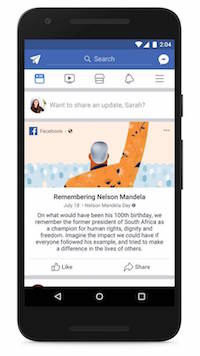 Facebook, of course, has gone large by inspiring its global community to reflect on Mandela’s legacy of compassion, justice and care for the community.  “Nelson Mandela dedicated his life to the struggle for equality and social justice, and many around the world remain indebted to him for the selfless contribution he made to humanity,” says Nunu Ntshingila, regional director for Facebook in Africa.

“Nelson Mandela’s 100th birthday is a moment we should celebrate globally. We will anchor on Madiba’s legacy as a way to inspire people to do good in their own community, wherever they are in the world.”   Building on its partnership with the Nelson Mandela Foundation, Facebook will be celebrating Mandela Day through several initiatives:

Note: This story will be update throughout the day as further media Mandela moments come in.