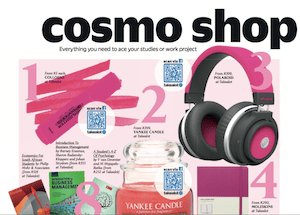 COSMO SA and Takealot.com have partnered to create an easy way for readers to shop the pages of the July 2018 issue of the magazine. Readers are able to shop the majority of the products featured in the issue by scanning the QR codes printed next to selected items.

Julie Anne-Walsh, Takealot.com chief marketing officer, said fun, hassle-free online shopping is the way forward for the South African market. “We’re beyond excited to offer COSMO SA readers our world-class online shopping experience,’ she says. ‘By using QR codes, readers are able to snap and shop products across 27 departments, including electronics, beauty, fashion and books – anything they can imagine.”

Using Facebook’s QR code scanner, users can navigate from the magazine to purchasing items they love on their mobile phone with useful how-to icons for instruction.

The partnership allows the magazine to take the reader on a journey from inspiration to purchase wherever, whenever. Data shows that the COSMO reader is regularly shopping online, and the integration of QR codes is just another way the brand is helping the reader achieve the look to live her best life. 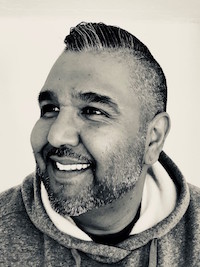 n a move underscoring the importance of technology to successful companies worldwide, FCB Africa has named Andre Pillay, currently its chief information officer, as its first chief technology officer, and awarded him a seat on its executive committee.

Making the announcement, FCB Africa Chief Executive Officer, Brett Morris, said Pillay’s responsibility in his new role will be to consider technology and its impact on the business beyond the functionality of information technology.

“The role of a CTO is a critical one for companies seeking to remain at the top of the heap. By continually assessing and implementing the latest developments and innovations in technology to improve our internal operations as well as our output, Andre will play a significant role in ensuring FCB Africa’s continued business success,” he said.

Having joined FCB Africa in 1997, Pillay went on to attain a Masters in Business Administration in 2004 and a Masters in Information Systems Management & Technology in 2016. This, added Morris, was a shining example of his commitment to continued success, which is embodied in FCB Africa’s Never Finished Ethos. 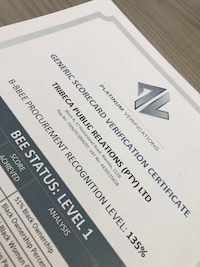 The B-BBEE verification process was based on the Marketing, Advertising and Communication (MAC) Sector Code, which defines Tribeca as a large entity due to its annual turnover being above R10 million.

“Tribeca’s approach to transformation and empowerment embodies our values, our ethos and our business philosophy,” says Tribeca director Cian Mac Eochaidh. “We believe that contribution is more important than compliance and we place people and relationships at the forefront of everything we do. “

Tribeca’s commitment to empowerment includes a partnership with the Itirele Foundation Charitable Trust – an independent trust with the sole focus of igniting a culture of black female entrepreneurship in South Africa.

Itirele owns 18% of the issued shares of Tribeca Public Relations (Pty) Ltd unencumbered and applies the dividend income received from this shareholding to support the growth of small and medium enterprises, develop entrepreneurial role models, and stimulate and reward entrepreneurial innovation. 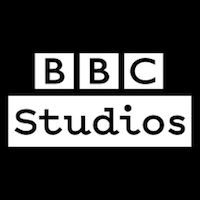 The results reveal that each commercial entity joined together to form a single commercial group from a strong financial base, with BBC Studios reporting headline sales of £432 million and EBITDA of £7.2 million[1] in its first year of trading, and BBC Worldwide showing an increase in EBITDA to £118.3 million, while sustaining cash returns to the BBC above £200 million for a fourth successive year.

Tim Davie, CEO for BBC Studios, and formerly CEO, BBC Worldwide, during the financial year, said: “BBC Worldwide delivered a solid performance for 2017/2018 against a rapidly changing and an ever more competitive landscape. The results reflect strong delivery against our strategy; investing in premium British IP and an increased focus on customer management have led to another record year for content sales, while our productions, formats and branded services continue to extend their global footprint and find wider audiences.”

The Gold Cup is Rugby Africa’s flagship competition. It gathers the best six teams on the continent (Namibia, Kenya, Uganda, Morocco, Zimbabwe and Tunisia) and matches are played in a league format, with the final match taking place on 18 August.

The winner of the tournament will book a place at the Rugby World Cup in Japan in 2019, so the stakes are high.

“Sports coverage is the company’s DNA so it is exciting to be partnering with APO Group and Rugby Africa to boost the exposure of this great competition,” said Lee Martin, SVP, global strategic development, Getty Images.

The President of World Rugby’ African association, Rugby Africa, Abdelaziz Bougja, highlighted the importance of partnering with a renowned organization like Getty Images to showcase some of the brightest sporting talents on the continent.

Forrester has acquired FeedbackNow, a maker of physical buttons and monitoring software that companies deploy to measure, analyse, and improve customer experience. Forrester also acquired GlimpzIt, an artificial intelligence and machine-learning provider based in San Francisco.

The acquisitions of FeedbackNow and GlimpzIt are part of Forrester’s plan to build a real-time CX Cloud, integrating a range of inputs to help companies monitor and improve experience.

Through the acquisitions of FeedbackNow and GlimpzIt, Forrester is changing the CX game. It is expanding the range of CX inputs, enabling immediate insights, and prioritizing those experiences that will create the greatest financial value. The most important element is speed, enabling CX to work at the velocity of customer expectations.

AF Proxy Services relaunch in a boost for Dotafrica resellers

Registrars and/or Resellers (RaRs) that are not ICANN-accredited but wish to provision dotAfrica (.africa) domain names can now do so by simply becoming a reseller on the AF Proxy Domain Name Registration Platform.

Africa-specific products and services while expanding the brand’s regional influence. The acquisition of valuable online real-estate in a fast-growing and high-potential market can also be achieved with a .africa domain name. 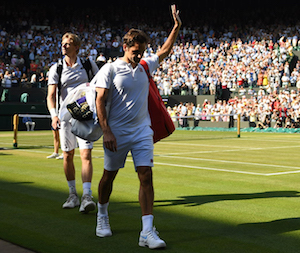 “Sport has a beautiful way of uniting friends and families, and sometimes even strangers. This is our way of thanking our customers for their support,” said Calvo Mawela, CEO for MultiChoice South Africa.

The 18-day open period will expose customers to a variety of sport which includes Sunday’s FIFA World Cup final and the third-place playoff match on Saturday, the women and men’s Wimbledon finals (and that includes watching SA’s Kevin Anderson, who knocked out Roger Federer on Wednesday), the German and Hungarian Formula One Grand Prix, the Super Rugby playoffs, international pre-season football tournaments, the Monaco and London Diamond League meets, the Tour de France, the Open Championship, the inaugural Athletics World Cup and several international cricket tours.

Customers will also be able to stream these channels live on DStv Now online or on the app.

As excitement builds for the World Cup semi-finals, Ads24 kicked off its own series of high-energy football-styled activations last week to showcase the reach of its popular mass market titles. Now in its second year #Ads24Diski18! is proving even more popular than last year’s event, with agency members blasting vuvuzelas, dancing, singing and egging their teams on in ferocious rounds of foosball mania.

The aim of the in-agency activations is to showcase the potential and reach of Ads24’spopular mass market titles: Daily Sun, Die Son, Soccer Laduma and Kick Off. These titles cater for 64% of South Africa’s population and reach one in two South Africans every month.

Team players were presented with a finger football desk drops to hone their skills but the ultimate challenge lies in Ads24’s new and improved online diski game. Agencies and clients working with Ads24 are invited to play to up their chances of winning by visiting ads24diski.co.za. Simply register, pick a team, build a player and take a shot at the goal to stand a chance of winning one of six Sony PlayStation 4 consoles and a FIFA 18 game. Contenders are encouraged to share their score on social media and tag @Ads24 and use the #Ads24Diski18 hashtag.

#Ads24Disk18!i is part of the drive to educate media buyers about the mass market by engaging in the competition and surrounding content in a way that the mass market enjoys. In addition, Ads24 is offering promotional packages for a limited time only:

Activations will roll out in Johannesburg, Cape Town and Durban over the rest of July. 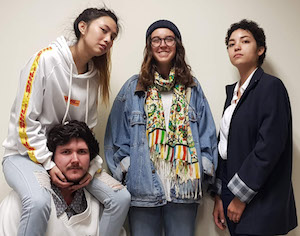 A team of four second-year students at Vega (a brand of The Independent Institute of Education – The IIE) made it to the final round of the Capitec Challenge, placing second overall and beating a host of strong senior competition from other schools across the Western Cape.

By maintaining a strict focus upon its business model as a retail bank, Capitec has been able to keep costs low for its consumers and rapidly earn itself the status of South Africa’s most beloved bank. They have also invested in funeral cover where it will offer a product that is unique, innovative, cost-effective and adds value to its clients.

Capitec wanted to launch their funeral cover in typically unconventional fashion, they bypassed their traditional agencies and took the challenge to Cape Town’s leading schools of creativity. “Capitec wanted to launch a new funeral cover product during the 2018 FIFA World Cup in a manner that would get South Africans talking” says Alexander Sudheim, Senior Copywriting lecturer at Vega. “Despite the tough competition, the Vega team performed exceptionally well and came a close second overall. This challenge provided students with the opportunity to showcase their acumen, creativity and ingenuity on an engaging real-world brief.”

The team, made up of Henko Brand, Jir-Xin Lai, Lauren Ewertse and Nikola du Toit, conceptualised a clever campaign titled #YouCantFakeDeath. South Africans were encouraged to immediately tweet the name of the player and the soccer game using the hashtag #CapitecChallenge  every time a player ‘faked’ an injury during a World Cup match. All tweets would be entered into a competition and participants would stance the chance to win a trip to Russia to watch the FIFA World Cup.

Along with the wealth of experience gained, students were given a cash prize of R10,000, and a R50 000 donation for the Vega Bursary Fund on behalf of Capitec.

SPARK Media on the value of a quality online advertising environment

“This recent study conducted by GroupM UK and Newsworks is what many publishers have been waiting for and what we’ve always said,” says Ashleigh Footit, head of Techops at SPARK Media.

The study offers proof that ads appearing in quality online environments are 42% more cost effective for advertisers based on levels of engagement, viewability, above the fold placement and dwell time*.

“Instead of buying placement on the open market where low quality environments are often a norm (the study found that 48% of measurable ads on the open exchange were never actually seen), buyers can access PMP’s like Ignition Sell where quality is a priority because Caxton CTP Publishers have a large team of editors and journalists ensuring that the integrity and credibility of content that is curated and created is never compromised. This is done in the best interest of both consumers and advertisers,” said Footit.