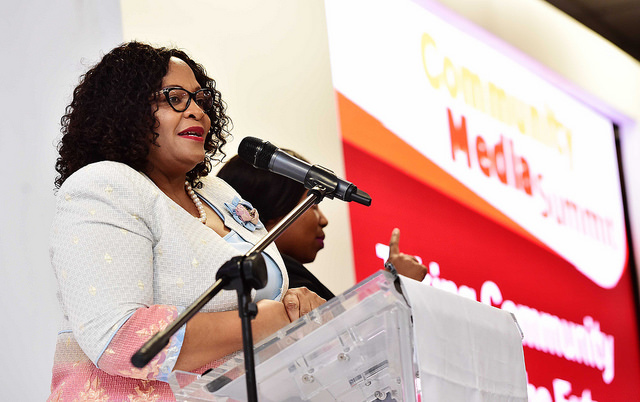 Addressing the Community Media Summit in Boksburg, the minister said the future of the media landscape should be about the birth of an independent industry that is premised on transformation, as the sector has remained monopolised and highly dominated by a few.

“We do need an alternative voice and not a voice that is just a mouthpiece. It must be independent; it must also deal with issues of creating this new nation that we are striving for. Media transformation remains crucial and we will continue to fight for a media that better represents the views of all South Africans,” Mokonyane said.

She said transformation was about opening the media space to more role players, especially those in the community media space.

“We need a diversity of views and this will only be enhanced by plurality of media. Plurality matters because it contributes to a well-functioning democratic society that is characterised by informed citizens.  It prevents any one media owner or owners having too much influence over public opinion and the political agenda,” Mokonyane said.

She said the ownership and control of media still largely remains in the hands of a few.

“This extends not only to media itself but across the entire value chain of publishing, printing, distribution, circulation, research and advertising.

“It simply cannot be that patterns of ownership across the entire value chain still remain largely unchanged 24 years into our democracy,” the minister said.

She encouraged community media to ensure that they comply with the regulations because failure to do so threatens their existence.

“We need to make sure we have the ability to justify our presence and have the capability to continue existing… We [also] have a responsibility to account,” Mokonyane said.

Mokonyane said community media had a critical role in growing the economy, ensuring inclusive growth as well as contributing to an inclusive society.

She said it was important for local economies to be strengthened through the community sector.

“Young people in this country are tired of job opportunities. It does not kill the level of unemployment. What we must do is create new industries and new sites of activity,” Mokonyane said.

The summit was hosted by the department of communications, together with the Government Communication and Information System (GCIS), Media Development and Diversity Agency (MDDA), Independent Communications Authority of South Africa (ICASA), SENTECH and the South African Broadcasting Corporation (SABC). – SAnews.gov.za