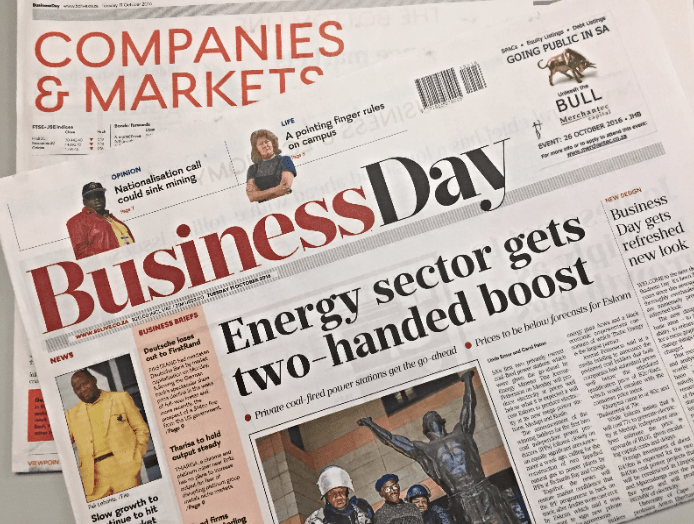 Far from Tiso Blackstar “surreptitiously” approaching the shareholders of Independent Media, including the PIC, on many occasions “to try and consolidate the newspapers of the two businesses”, the PIC itself called a meeting of the two media houses in order to persuade Tiso to help the PIC by assuming management control of Independent Media.

This is one of the startling claims made by Tiso Blackstar’s management team after another ‘opinion’ piece by Dr Iqbal Survé across various Independent Media titles. This was followed, as is her wont, by another editorial penned by Business Report editor, Adri Senekal De Wet, in which she continued along a similar theme.

In a strongly-worded and lengthy statement issued on Wednesday evening, Tiso Blackstar’s management team rebutted claims made by Survé in his latest “meandering diatribe”, saying it was “littered with gross inaccuracies, blatant lies and defamatory statements which call for a response particularly as, in the age of fake news, malicious falsehood is often perceived as the truth”.

[Senekal De Wet, in her editorial, said, “Indy never attacked Tiso, but we had to react to false (or fake) and untrue nonsense that Tiso used and continues to use, to try to bring Indy down.”]

Tiso Blackstar is clearly gatvol. The objective of its statement was clear: to bring this to a head and allow Survé space to prove all his detractors wrong. A put up or shut up moment for him.

Top of the agenda was the PIC issue. The Public Investment Corporation met with Tiso Blackstar at the Maslow Hotel in Johannesburg on the 29 September 2016 as “they were understandably concerned about the running of the company, were encountering difficulty in obtaining financial information from Survé and had growing concerns about the ever dwindling prospect of being repaid amounts loaned to Survé to fund his acquisition of Independent Media”, Tiso said.

The PIC wanted to explore “the Tiso Blackstar Group could potentially help the PIC, including but not limited to us assuming management control of the titles owned by Independent Media”. The meeting was unproductive, it said, as “Survé was obstructive and PIC’s concerns were exacerbated”.

Yet the PIC failed to act on its concerns and in fact stumped up over R4.5 billion for AYO, another Survé/Sekunjalo-owned company to list on the JSE. The Media Online approached the PIC for comment on whether they’d subsequently received Independent’s financials and why they hadn’t taken action after the 2016 meeting. The PIC said it would issue a statement “later today”.

[The Media Online will update this story as and when new information comes to light, including a response questions sent to Independent Media.]

Tiso said Survé had plumbed the depths by “degenerating into the cesspool of hate speech by comparing the legitimate reporting of Business Day, South Africa’s most respected business publication, to a ‘Goebbels strategy’. Goebbels was a Nazi politician and Reich Minister of Propaganda of Nazi Germany, a close associate and devoted follower of Adolf Hitler and known for his virulent anti-semitism which extended to advocating for the extermination of the Jewish people”.

It also pointed out that it was “deeply ironic” that Survé made numerous references to the press code in his column “despite the fact that his media group has turned its back on the co-regulatory Press Council to which the rest of the industry belongs and which holds all member publications to account in terms of our industry’s professional code”.

The company laid bare Surve’s claims about its financial health, giving detailed information. “The Tiso Blackstar Group’s earnings – as our publicly available results show – have grown consistently since 2015, particularly in its media division. Clearly Survé and his team have neither reviewed them nor looked at our history or, more likely, are disingenuously misleading the market. We are not in financial trouble and we don’t need consolidation to survive,” it said.

“In sharp contrast Survé, took over a very profitable business that is now loss-making and it appears he still owes the full purchase price plus interest to the PIC and the Chinese consortium which funded the transaction.”

Now Tiso has thrown down the gauntlet, challenging Survé to come clean. This was “an opportunity to silence his critics, not with innuendo, misrepresentations, blatant lies and inflammatory accusation, but with facts”, Tiso said.

It challenged Survé to:

“If our reporting on the above is found to be incorrect following a substantive and verifiable response from yourself we will issue an apology,” the company said.

Independent had not responded to questions from The Media Online as to whether Survé would take up the challenge at the time of publishing.

This is a developing story and will be updated when new information becomes available.