On the record… Manyi, Maleka and government’s media buying 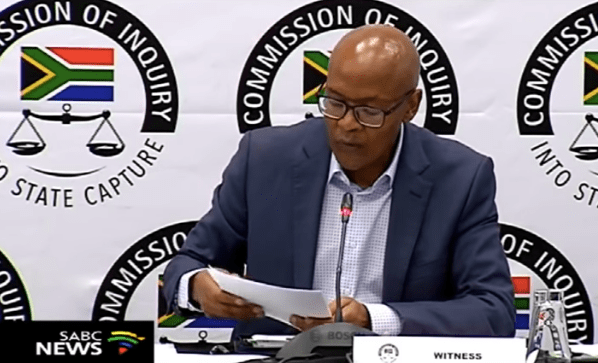 [COMMENT] Mzwanele Manyi’s third appearance before the Zondo Commission of Inquiry into State Capture was markedly different from his previous two performances.

An expansive and jovial Manyi, confident and playing to a captive audience at the Parktown venue and those watching on television, on Monday held forth in a monologue in which he justified his appointment as head of Government Communications and Information System (GCIS), expanded on why evidence given by GCIS veteran Phumla Williams was nonsense and explained the reasons behind the Gupta-owned newspaper, The New Age, scoring millions of rands in advertising within the first few months of operation. This was despite the title having no audited figures, at least not those validated by the “cabal” at the Audit Bureau of Circulation.

But when evidence leader Vincent Maleka started prodding and poking holes in his statement, asking pointed questions about the numbers Manyi produced to justify government’s adspend on The New Age, the spin doctor and media owner deflated, ending his appearance with arms tightly folded and a face like a highveld thunderstorm. Was he unaware that anything he said could and would be interrogated, as is the purpose of the commission?

So it was not surprising that come Tuesday morning at 9am and the start of his second consecutive day on the stand, Manyi baulked and asked that Maleka recuse himself citing ‘bias’. Maleka was too “prosecutorial”, Manyi said. His Twitter supporters agreed, saying no other state capture witnesses had been subjected to such cross examination. No other witnesses were allowed to deliver their statements in their entirety without questions from the commission’s lawyers either, but that wasn’t mentioned.

Maleka calmly responded that if Manyi felt uncomfortable‚ the commission would certainly follow process. “If there is a need for a formal application for recusal‚ then let it be‚” he said. Manyi, however, returned after a brief break.

This being an inquiry into state capture, it was the Gupta family’s media holdings, and the state’s funding of The New Age via adspend and state-owned enterprise supported business breakfasts that are being investigated.

Former cabinet spokesperson and head of GCIS, Themba Maseko (whom Manyi replaced after Jacob Zuma fired him) reported how the president had personally called him: “My brother, there are these Gupta guys who need to meet with you and who need your help. Please help them.” Zuma wanted Maseko to redirect R600 million in government adspend to The New Age which at that time had not yet published a single copy [the first came off the press on 6 December 2010].

At a meeting with Ajay Gupta, Maseko was told to order all government departments to redirect their spend to The New Age. Failure to do so would result in heads rolling, a prophetic statement, as Maseko was redeployed from GCIS with Zuma on 3 Feburary 2011 wishing him a “warm goodbye“.

Read more: The New Age gets over R10 million in government adspend

Understandably, then, how GCIS – the “conduit” of government department’s adspend – spent its advertising budget was of major importance to the commission.

Less understandable was Manyi’s reasoning behind why this newly minted newspaper should receive the proportion of adspend it did over the years. He contradicted himself continuously.

Why did GCIS support The New Age? It was a breath of fresh air, said Manyi. While mainstream media was “hostile” to government, only reporting the bad news about government, The New Age had a “glass half full” attitude. But what about the fact it had not undergone auditing by the Audit Bureau of Circulation, Maleka asked. According to Manyi, the ABC was run by a “cabal” and was a barrier to entry for new media. “It was not a be all or end all to have ABCs at GCIS,” he said.

What the ABC says

Charles Beiles, general manager at the ABC, said The New Age had never applied for membership to the ABC. “They contacted us indicating their intention to apply for membership but never did. Mr Manyi’s comment that the ABC is run by a cabal reflects an inadequate awareness of the facts,” said Beiles.

The ABC certified circulation data, he explained. “It does this by issuing independently audited, accurate, consistent and regular data. This information aids the advertising and marketing industries in media planning and buying, and the publishers in selling advertising.”

The ABC, he added, was a bi-partite agreement between publishers and advertisers and marketers. The board consists of eight members – four publisher members, two advertiser members and two marketing members. “The members are appointed from the various representative associations. This has been done so that there is a level playing field between the bi-partite groups. Should there be a deadlock, our MOI provides a deadlock breaking mechanism,” he said. “A representative of the Association of Independent Publishers (AIP) attends the ABC’s board meetings by invitation. AIP is a national organisation advancing the interests of the local grassroots independent media in SA.”

Far from preventing creating barriers to entry, and leaving out the vital role community media played in South Africa, the ABC has a grassroots certification, which certifies a publication’s print run. “This assists small start-up, and township publications in selling advertising, and is endorsed by AIP,” said Beiles.

ABC figures, said Manyi, were “just a code number with no brain, no thinking involved. When you’re using placements you need to take psychographics into account. Telmar do that, he said, but [GCIS] would also use professionals to add a  qualitative aspect the the process. Telmar, he added, was an objective tool on which to base decisions on adspend. If GCIS media buyers added information on desired outcomes in terms of target market, Telmar would suggest The New Age. “Does it have the market we are looking for?… the issue is at that point in time what was the campaign, and what did system say? Issue at hand is that GCIS is informed by Telmar. If Telmar says The New Age…”

On to the role of Telmar

Maleka then put it to Manyi that he’d earlier said the most the objective vehicle was Telmar. “You recall that? You accredited Telmar as most objective tool. You remember that? And you know, don’t you, part of Telmar’s requirement is that a publication where government decides to place advertising must have accredited and audited circulation and readership figures?”

Manyi then accused Maleka of taking an unsophisticated and “mechanical approach”, and not taking “target marketing” into account. “GCIS doesn’t just follow Telmar but other organisations too,” he said. In terms of media development and diversity, it had a  “duty and responsibility” to support publications over and above mainstream, he said.

Earlier, Manyi said GCIS was “not social development department seeking to spread adspend. How much a newspaper got is neither here nor there, he said. It was all about what was in business plans and a campaign’s objectives.

The New Age, said Maleka, was not assessed by Telmar, as Manyi said it had been.

Jennifer Daniel, regional director for Africa/Asia-Pacific  for Telmar Media Systems, explained that Telmar is data neutral  and did not do research. “We load over 10 000 databases in 85 countries,” she said. “He [Manyi] is talking about Telmar as though we do the research. We provide the software that reads whatever is in these data sets.”

In terms of The New Age, she said, information about the title was published in the last AMPS report in 2015, which was probably what Manyi was referring to.

In one of the most ironic moments of Manyi’s testimony, he said government chose The New Age as its vehicle for adspend because it was sick and tired of the inaccuracies contained in mainstream media’s reporting.

At that point, Justice Raymond Zondo interjected with his own story about the newspaper. It had interviewed him after he was appointed Deputy Chief Justice of the Constitutional Court. And had made several glaring errors in its reporting. When he asked for these mistakes to be corrected, his request was refused. He pointed out that the entire interview had been recorded and he could prove mistakes were made. Still, he had no joy. Manyi’s response? “I rest my case”.

Did my ears deceive me? Judge Zondo complains about TNA's treatment of him after an interview & refusal to correct, and @MzwaneleManyi goes: I rest my case. That's the treatment we've been getting. All while he's defending TNA & attacking "mainstream media". Huh?

Watch an SABC News YouTube excerpt from the proceedings here: