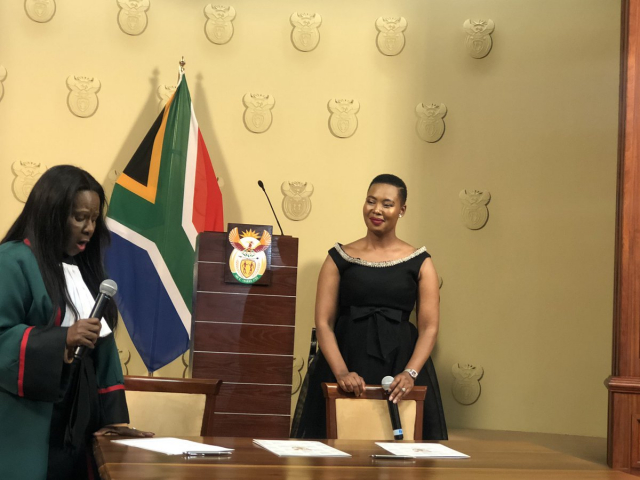 Ramaphosa’s initial appointment of scandal-prone former water and sanitation minister, Nomvula Mokonyane, was not a popular choice, to put it mildly. It wasn’t long before Twitter had a jokes going at her expense.

Environmentalists : Nomvula, the numbers of Rhinos are falling due to poaching!!
Nomvula : We will pick up the numbers!!

With South Africa having five communications ministers in 21 months, the main hope is that Ndabeni-Abrahams will not just bring much-needed stability to the department/s and ministry, but also manage the massive amount or work required to implement digital terrestrial television and handle the cash-strapped under-pressure SABC – which faces mass retrenchments too.

The EFF’s spokesperson, Mbuyiseni Ndlozi, welcomed the appointment, saying it was a statement of confidence in young black women who are often left out in decisions of power. Ndabeni-Abrahams was a member of the ANC Youth League when Julius Malema was its president, as her response to a tweet by the CIC indicated:

Meanwhile, the DA’s shadow minister of communications, Phumzile van Damme, said Ndabeni-Abrahams would have to “hit the ground running”.

“Stella Ndabeni-Abrahams has served at both departments, [so] I expect her to hit the ground running,” said Van Damme. “First on her agenda is the SABC retrenchment crisis, which she must deal with but make sure respects and upholds the SABC’s independence.”

Read more: The SABC reality – Unpicking the myths about the Section 189 process

Read more: No retrenchments at the SABC without skills audit

“The former DoC should never have been split,” Shinn told The Media Online. “I believe that the split was one of the major causes of the failure of the digital TV migration programme as a communication chasm resulted with the minister of comms having the executive oversight while the entities responsible reported to the minister of telecomms.”

Shinn’s advice to the newly-minted minister was to make public the report of the advisory committee appointed by her predecessor to probe the BDMigration programme and its suggestions on how to make progress. ”

Her predecessor’s announcement on the abandoning of the STB progamme in favour of some voucher programme for qualifying poor households has not been fully explained,” said Shinn. “Ms Ndabeni-Abrahams needs to explain this, its financing and how it is going to be implemented. I would also ask her to ensure that those involved in the STB tender process who may have broken the law or acted irregularly are properly investigated by the appropriate authority and action taken against them.”

Like Van Damme, Shinn said the SABC crisis had to be on top of Ndabeni-Abrahams ‘to do’ list. “She also needs to address the governance and financial problems at the SABC to ensure that the talent is not jettisoned in favour of the keeping on board the unproductive and ‘untalentteds’ who seemed to view the SABC as a sheltered employment haven,” said Shinn. “It is critical that a skills audit be done to ensure that talent and experience is retained to rebuild the SABC into a broadcaster of quality.”

Shinn also expressed her concern over the state of the Media Development and Diversity Agency, which, she said, was “crippled by corruption and mismanagement”.