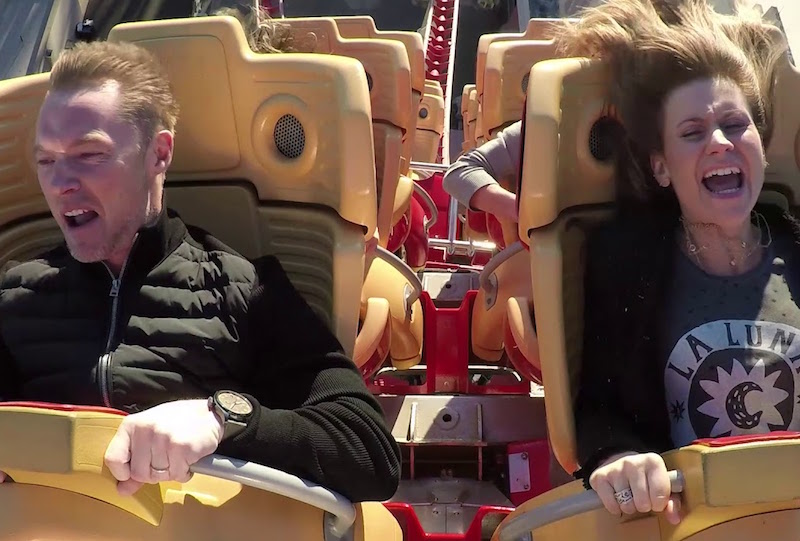 Last week I was invited by Primedia Broadcasting to hear the “multi award-winning radio expert, Steve Taylor of Bauer Media UK” discuss how radio can be used to take branded content everywhere.

In order to demonstrate the host of ways radio can be used to engage consumers, this genial pundit took the audience through a range of entertaining and effective case studies. This was not a hard number crunching, proof of ROI type presentation, but rather a demonstration of the power and versatility of radio in making connections with audiences.

A brilliant example of this was a video of a rather terrified looking Ronan Keating gamely trying to sing Life is a Rollercoaster while actually riding a nauseatingly large rollercoaster. In his incarnation as a breakfast show host on Magic FM, Keating and his co-host, Harriet Scott, had presented their show live from Universal Orlando Resort in Florida. Rollercoaster rides are a mandatory part of any theme park experience, and the challenge to him was inevitable. The resulting three-minute video, of which we only saw a clip, was eminently entertaining. Taylor made the point that this moment was the climax of a three-month story arc and that some lucky listeners had won the opportunity to travel with the breakfast hosts to the park.

On a contrastingly sombre note, another video example from the Magic network was presenter Lynn Parsons talking about her friend, Val’s, battle with cancer. As Taylor remarked, good radio presenters are born storytellers and Parsons’s account was emotion wrenching. It started with Val buying a teddy bear for her five-year-old son and telling him that she had put all her love into it (so it would be there even if she were not).

After an operation and chemo, Val bravely named her wig Wilma, which allowed her friends to talk openly about her battle. She spoke about how Val moved from negativity to positivity. When her doctor responded to her post operation question of “how long have I got?” with “how long do you want?” she said she wanted to see her son graduate. The doctor replied that “if she was lucky, she would see him retire”.

Parsons concluded that Val is still running around and probably will see Oliver retire, and then made her pitch for the Unity Band and cancer research. It was a most persuasive piece of communication.

Wickes is a home improvement chain, wanting to target tradespeople. While this is a rather specialist audience sector, the challenge is not alienating a broader audience. A promotion in which listeners were challenged to perform their imitations of power tools was a neat and amusing solution. Taylor pointed out that Wickes has been a long term (over 7 years) sponsor on Absolute Radio: in such a collaboration, the challenge is to keep the campaign fresh and interesting. This was one example.

Also playing on the unlimited fun that can be generated by audio was The Kerrang!’s Rock Dog partnership with Guide Dogs. Here a real dog hosted a Sunday afternoon show of rock anthems! It was rather barking mad and, perhaps, could only have been pulled off on an alternative mainstream youth-culture station.

Financial institutions often face issues of trust; radio is excellent at building trust. Bank Halifax took advantage of this in a promotion which asked listeners to nominate people who deserved to be rewarded. The example shown was of a youngster who was chosen for maturity beyond his years. The son of a mother, who suffered from anxiety and depression and was often unable to leave the house, this boy served as her carer and rock.

This young winner was treated to a make-over of his room. There were logistical challenges as the transformation had to be carried out whilst he was at school, but the expression of disbelief as he saw his new room for the first time was completely captivating. I did hope that he was a fan of blue as the bank’s corporate colour dominated the completed room.

The KISS radio brand is aimed at 15-34-year olds, a demographic that is always focused on the next cool thing. This made it the ideal partner for Peugeot to showcase a model aimed at this market. The approach started with a proprietary show but extended comprehensively across touch points. The extent of the collaboration was notable: the car manufacturer even produced a KISS Special Edition. The acid test was that the full run of these were sold.

KISS was also well suited to Garnier’s Chosen One, where the next station presenter was found amongst the listeners. The brief was about demonstrating confidence, and the hopefuls who made it to the Fresh Face Academy were a clear embodiment of that. Once again, this had obvious social media appeal, and plenty of experiential opportunities.

I particularly enjoyed Taylor making the point that promotion mechanics are timeless and highly adaptable. A block of ice can be used in many ways: freeze a hiking boot into it and it is a good and relevant demonstration of its hardiness to Nordic markets. Substitute cans of ale and UK lads will be intrigued, pop in a diamond and the ladies will be interested. Similarly, one permanent marker in a batch of erasable markers is a great way to find a winner, whether the contestants had to write their names on a car or a board.

There were many more examples of how radio brands effectively communicate beyond 30 second spots and move across touch points. Taylor assiduously avoided the hard sell approach, instead providing a session of inspiration and stimulation as to how radio can be used. He also provided a useful thought-starter pamphlet.

In our small market, media owners do not have the luxury of a centralised industry body: Julia Raphaely recently commented on how much magazines in South Africa have suffered without an industry body. It is heartening to see Primedia Broadcasting make this compelling case for radio.