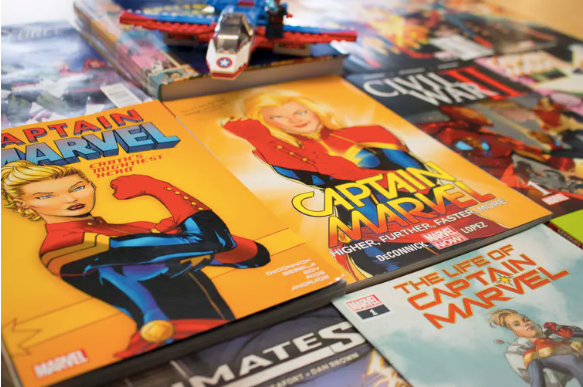 When the Captain Marvel movie opens on 8 March, coinciding with International Women’s Day, it will be Marvel Studios’s first female-superhero led film and many people will be lined up to see this much anticipated flick and to enjoy one of Captain Marvel’s trademark specialties: fighting galactic evil.

But more than just fighting aliens, Captain Marvel represents a strong female superhero with an intricate and complicated past. She struggles with anger issues as well as a sense of purpose. She’s also a sparkle-fisted smartass.

In the last decade, Captain Marvel has become a prominent character in Marvel comics. She’s a member of the Avengers, was the face of one side of the second superhero Civil War, and is a mentor to the new Ms. Marvel, Kamala Khan. In the hands of writers DeConnick, Margaret Stohl, Michele Fazkas, Tara Butters and Kelly Thompson, Captain Marvel has a rich context for cinematic success.

A new hero for a new era

“Let’s rewrite some history, shall we?” — Captain Marvel (Carol Danvers)

The Carol Danvers character was originally created by Thomas and Gene Colan in 1968 as an officer in the U.S. Air Force. Almost a decade later, she gained her powers through an accident and turned into Ms. Marvel. But the Captain Marvel we’ll be seeing on the screen is highly indebted to comic book writer Kelly Sue DeConnick’s narrative. There are even rumours that DeConnick has a cameo in the film.

In 2012, DeConnick created something of a masterpiece when she breathed new life into Captain Marvel. The female superhero first appeared in 1977, and originally named Ms. Marvel as a nod to the iconic feminist magazine, Ms.. She was a minor character but with DeConnick’s writing, Captain Marvel was re-developed to become one of the central characters in the Marvel Universe.

DeConnick’s reboot was also accompanied by a new look — leaving behind thigh-high boots, a swim suit and a mask for shorter hair, a Chuck Yeager jumpsuit and sensible footwear.

DeConnick’s comic book narrative begins with a touching tribute to Carol Danvers’s mentor and fellow air force pilot Helen Cobb — stressing the importance of inspiring female role models. Readers find out that Captain Marvel has tremendous powers drawn from her half human, half Kree DNA. Soon, Danvers is transported back in time and joins the Banshee Squadron, an all-female fighting unit in the Second World War doing battle and using Kree technology to advance the fight.

Carol Danvers also winds up being present at the moment of her superhero origin. Instead of following the 1977 narrative, where she was the victim in an explosion that would give her powers, DeConnick re-writes the narrative as a choice.

Danvers has the opportunity to prevent the explosion but chooses to let the past unfold in alignment with her current desire to be a superhero. This gives Captain Marvel’s reboot a compelling edge. She’s chosen her own destiny to become “the stars we were always meant to be.”

A poignant and hilarious character

Captain Marvel was part of the Ultimates, a mini-series about superheroes preventing cosmic threats (they transform the planet-eating Galactus into a golden fertility god), and became the “boss of space,” taking up residence with Canadian supergroup Alpha Flight on the Alpha Flight Space Station. Captain Marvel also joined the Guardians of the Galaxy and was part of A-Force, an all-female Avengers.

DeConnick’s run was poignant and hilarious and if the movie can keep pace, audiences will be in for a treat. We may also see something special from her cat Goose. (In the comics, Goose is known as Chewie — Captain Marvel is a huge Star Wars fan.) In the movie, Goose will likely steal a scene or two.

As the trailers for the film have shown, Captain Marvel will be punching aliens and blowing stuff up and we’ll definitely see why she has the moniker “Earth’s mightiest hero.” The movie is set in 1995, borrowing elements from Roy Thomas’s comic, “Kree-Skrull War” (originally published as Avengers #89–97 in 1971), and follows Danvers as she becomes Captain Marvel.

Captain Marvel is Marvel Studios’s 21st film in the Marvel Cinematic Universe and the first with a female-led superhero. Captain Marvel will also make a highly anticipated appearance in Avengers: Endgame, to be released in April, where she will no doubt square off against cosmic threats.