Marawa: Speaking out against sexual harassment or SuperSport’s presenter strategy? 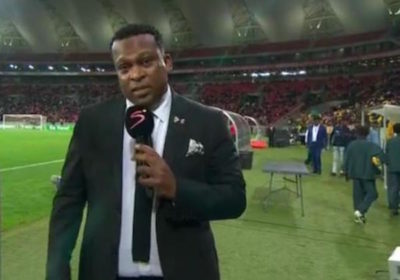 
Confusion still reigns over the reason for sportscaster Robert Marawa’s departure from SuperSport.

There’s been speculation that Marawa was let go after he spoke up in support of fellow sportscaster Mmaphuti Mashamaite, who is alleged to have been sexually harassed by her superior at SuperSport, who she refers to as a “sexual predator”.

Marawa retweeted many of Mashamaite’s tweets, which discussed the sexual harassment allegations, and he also posted this one:

Working and reflecting….Imagine paying for a service where people who r guilty of sexual harassment r employed and encouraged to work!! Lovely hey….

There’s also been murmurs that due to his outspoken nature, some football federations are not happy with Marawa’s criticism of them, and that they had a hand in his departure.

But SuperSport denies that those were the reasons, responding with this statement: “SuperSport is in the process of an exciting refresh of its local presenter line-up, which will be unveiled as part of our new football season campaign. This restructure includes us not pursuing our contractual relationship with Robert Marawa. Robert was personally advised of our decision earlier this week. We are grateful for his contribution over the years and wish him great success in his future endeavours.”

The broadcaster has declined to comment further, citing the go-to “internal matter” reason, despite calls for further clarity, which have been vicious on social media.

The day the news broke

There was much shock last week after Marawa took to Twitter on Thursday, just hours before the live broadcast of his show, Thursday Night Live with Marawa, to announce that the broadcaster had notified him that he should not turn up for work.

I received a text around 18H50 tonight informing me that I should not bother coming to Studio for Thursday Night Live with Marawa Show on @SuperSportTV… I would like to thank all those who have supported my journey as a Sportscaster & those I’ve worked with at Supersport! ✌?✌?

Marawa is consulting with his lawyers and is considering pursuing legal action against SuperSport. Requests by The Media Online for an interview with him remained unanswered at the time of publishing. He has also not revealed more information on social media, after posting this dramatic tweet:

One day u will ALL know. It will cost me my life but u will know.

Marawa in the headlines

This isn’t the first time that Marawa has made headlines, often in controversial fashion. His arrival at the SABC, subsequent departure and then return were all covered extensively by the media, particularly when his return landed several SABC executives in hot water over allegations of improper hiring procedures.

In the middle of last year, Marawa was also hospitalised, with many outlets covering the news.

Further back in 2017, Marawa made the headlines after his split from Pearl Thusi over cheating allegations.