A media house’s journey from print to digital 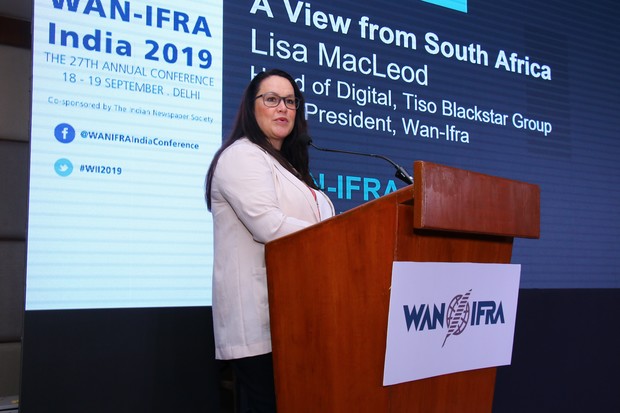 A South African spends more money, in a lifetime, on communication than on health or education. The country has a high penetration rate of smartphones, which unfortunately does not translate to cheap data rates.

In a country where people must choose between buying basic supplies or buying data, Tiso Blackstar Group is making a conscious effort to shift its operations from print to digital.

Lisa MacLeod, head of digital at Tiso Blackstar Group and vice president of WAN-IFRA, talked about technology innovation and business transformation at the South African media group, and if the future of news media business was sustainable for legacy media companies. MacLeod was speaking at the recent WAN-IFRA India Conference 2019.

MacLeod spent 12 years at the Financial Times in London and subsequently joined Tiso Blackstar in 2015 with a keen interest in paywalls and paid content. “In our company, we have focused hard on premium and paid content with a view to making the enormous to digital as print has started to decline,” she said.

“South Africa has 57.73 million people and 98.5 million sim cards. That’s more sim cards than people. Most people in South Africa will never work on a desktop. Their primary device for consuming news and content is a smart phone. High data costs are not only suppressing the media industry but also business in general,” said MacLeod.

The country has about 31 million internet users and 23 million active social media users. “We have most significantly grown our digital audience to about 8 million uniques a month across our network, so there is growth, but it is slow,” said MacLeod.

The company has undergone tremendous reorganisation in the newsroom to bring people closer and foster collaboration. It has redesigned all its newspapers to take them to market with a new look and spent time refining newsroom workflow.

Tiso has built its own content management system (CMS) and editing is now done for the web first and that content is subsequently pushed into print for the latter half of the day. The company has reduced the number of editions it produces and tried to trim down print costs as much as possible. “We were expecting a 20% hike in paper prices this year, which is huge,” MacLeod said.

The company now has an internal wire service system, sharing content from all newsrooms for use on web and print. The reporting staff also starts work earlier in the day to file reports for the web and cater to subscribers. “We now commission stories across the group instead of doing it per title. This has helped avoid content overlap between the regional and national papers,” said MacLeod.

“These seemingly simple things have made us efficient, freeing up people who can concentrate on adding value to the premium content we are producing for our subscribers.”The company now has an internal wire service system. The reporting staff also starts work early in the day to file reports for the web and cater to subscribers.

“We now commission stories across the group instead of doing it per title. This has helped avoid content overlap between the regional and national papers,” said MacLeod. “These seemingly simple things have made us efficient, freeing up people who can concentrate on adding value to the premium content we are producing for our subscribers.”

The Tiso newsroom also boasts of a big events area, a good revenue source for the brand. The latest addition to the company is a three-person viral content team that takes regular news stories and re-packages them in a web-friendly and attractive way. In August, the team registered 1.3 million new uniques on the viral content alone.

The company has six operational paywalls: Three are defensive (protect print revenues), one houses niche business content (for high end readers) and two are digital editions, which is a new concept and a replacement for a newspaper.

“When people move to digital from print, they may not like the experience of being in an infinite website with millions of stories, particularly the older readers,” said MacLeod. This closed digital-only ‘newspaper’, Times Select, is put out every day at 5am and has 26 stories. It is not updated during the day. The company has also launched a data free application, SA News LIVE, to cater to most of the population that can’t afford data. The data costs are borne by the provider and the platform is monetised by un-closable vertical video slots that play for 10 seconds.

The brand has also launched a data free application, SA News LIVE, to cater to most of the population that can’t afford data. The data costs are borne by the provider and the platform is monetized by un-closable vertical video slots that play for 10 seconds.

“These 10-second ads have a very high engagement and viewability, which means we can charge a higher CPM (cost per thousand impressions) for it,” said MacLeod. In August alone, the app registered 365 000 uniques and is growing at a rate of 200% a month.

Print poses several challenges in South Africa. High petrol and long distances between drops translate to high transportation costs. “We had to learn the hard way that our customer service cannot be poor. It is significantly more expensive to acquire a new customer than it is to retain an existing one. To lose your acquired subscriber base is a tragedy and an expensive one at that,” said MacLeod.

For Tiso, print is an important premium product, but the company’s aim is to become a sustainable subscription-based media brand.

“Our daily newspaper stats average about a 16% year on year decline. Paid content is still in its nascent stages, but we have added a significant number of subscribers. Online margins are about 30% higher compared to print because we save the cost of delivery,” said MacLeod. “Our active digital users represent about 35% of our subscriber base and that number is growing.”