The 14 best international series on Showmax in December & January 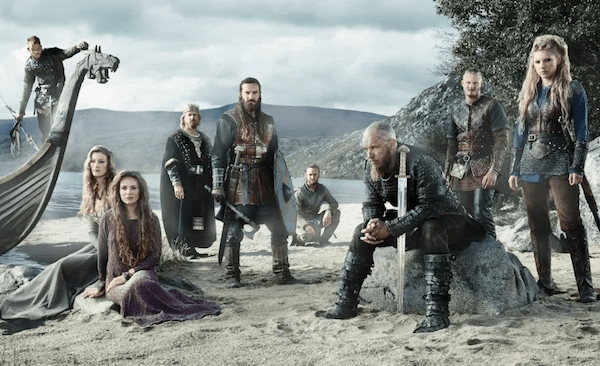 Photo: The last season of Vikings is on Showmax.

Final seasons of Vikings and Silicon Valley; debut seasons of Mrs. Fletcher & The Righteous Gemstones and much more.

:: Just renewed by HBO for a second season

A spinoff from the multi-award-winning The Fosters, Good Trouble explores the trials and tribulations of the tenants of Downtown LA’s hippest residence, The Coterie. This season, software engineer Mariana (Cierra Ramirez), law clerk Callie (Maia Mitchell) and the rest of The Coterie crew will continue to navigate their early twenties as they deal with breakups, demand equality, find happiness and discover what it means to fight for what you believe in.

First on Showmax. New episodes every Thursday from 5 December

The vikings push further into Scandinavia as a victorious Bjorn returns from The Battle of the Brothers to find that being a hero and a leader comes with its own challenges. Torvi and Ubbe search for clues to Floki’s whereabouts in Iceland, while Ivar follows The Silk Road to Russia, where he encounters a ruler even more merciless and unpredictable than himself. Meanwhile, Lagertha’s hopes for a quieter life on her own farm are threatened by new dangers closer to home.

First on Showmax. Binge from 9 December

A collaboration between Mike Judge (Beavis and Butthead) and Alec Berg (Barry), Silicon Valley takes a comedic look at the modern-day epicentre of the high-tech gold rush, where the people most qualified to succeed are the least capable of handling success. Thomas Middleditch stars in an Emmy-nominated role as Richard Hendricks, a Silicon Valley engineer trying to build his own company called Pied Piper.

:: Winner of two Emmys, with a further 38 nominations

First on Showmax. Binge from 13 December

Mrs. Fletcher is a dual coming-of-age story chronicling the personal and sexual journeys of an empty-nest mother and her college freshman son, who both embrace their newfound freedom with mixed results. Emmy nominee Kathryn Hahn (Transparent) stars in the title role.

The seven-part series is based on the bestselling novel of the same name by Tom Perrotta (The Leftovers, Little Children).

As Indiewire wrote after its premiere at Toronto International Film Festival this year, “I could watch 100 episodes of Mrs. Fletcher… A smart, thoughtful, and hopelessly addictive adaptation… Ultra-charming.”

First on Showmax. Binge from 16 December

Every teenager thinks their parents are evil. What if you found out yours actually were?

Marvel’s Runaways is the story of six very different teenagers who can barely stand each other but have to unite against a common foe – their parents.

Season 3 sees the Runaways searching for their captured friends Gert, Chase, and Karolina. An unstoppable enemy targets Leslie and the child she is carrying, and the Runaways are drawn into a dark realm ruled by Morgan le Fay (Elizabeth Hurley from Austin Powers and Gossip Girl), the most wicked foe they have ever faced. Look out for a Cloak & Dagger crossover this season too!

:: Based on author Philip Pullman’s award-winning trilogy of the same name

:: “The perfect superhero story for our tattered times.” The Guardian

Rick and Morty follows a sociopathic genius scientist, Rick, who drags his inherently timid grandson, Morty, on insanely dangerous adventures across the universe.

As the 100% critics consensus puts it on Rotten Tomatoes, “Rick and Morty‘s fourth season is both an exciting progression and a delightful return to form that proves more than worth the two-year wait.”

It’s hard being a kid growing up in South Park, Colorado, what with all the insane adults, deranged celebrities and occasional talking turd…

Season 23 starts as Cartman sends an anonymous tipoff that Kyle is an illegal immigrant, leading ICE to detain and separate his entire family after Kyle’s dad can’t find their passports. So yes, South Park is as topical as ever, or as Forbes puts it, “Reality has never resembled South Park as much as it does today.”

:: #61, Most Popular TV, IMDB
:: Recently renewed for another three seasons

In the early 1960s, infamous crime boss Bumpy Johnson (Oscar winner Forest Whitaker) returns from 10 years in prison to find the neighbourhood he once ruled in a shambles. With the streets controlled by Vincent ‘Chin’ Gigante (Emmy nominee Vincent D’Onofrio from Daredevil and Jurassic World) and the Italian mob, Bumpy must take on the Genovese crime family to regain control. During the brutal battle, he forms an alliance with radical preacher Malcolm X (Nigel Thatch from Selma). From the creators of Narcos, Godfather of Harlem shows how the criminal underworld and the civil rights movement collided during one of the most tumultuous times in American history.

:: Directed by Oscar winner John Ridley, the writer of 12 Years A Slave and creator of American Crime

This half-hour drama focuses on two Mexican-American sisters from the East Side of Los Angeles who couldn’t be more different or distanced from each other. Circumstances force them to return to their old neighbourhood, where they are confronted by the past and the discovery that their deceased mother was in a lesbian marriage.

When Alex Rider learns that his Uncle Ian was killed in the line of duty as a British spy – and not a car accident like he’s been told – everything changes for this otherwise normal teen. Alex is soon approached by Alan Blunt, head of a top-secret offshoot of MI6 known as The Department, who reveals that he’s been unknowingly trained since childhood for the dangerous world of espionage.

Pressured to leave his old life behind, Alex goes undercover to investigate the connection between the deaths of two billionaires and a remote boarding school called Point Blanc. Upon arrival, he discovers that the students are subjects in the megalomaniacal school director’s plan to gain control of their families’ business empires. Aided by his classmate Kyra, best friend Tom, and his au pair Jack, Alex exposes the plot’s global network and begins his career as MI6’s youngest covert asset.

:: Based on the best-selling Alex Rider books by Anthony Horowitz

While Ray (Liev Schreiber in a Golden Globe- and Emmy-nominated performance)  is making personal progress, there are dangers that require the Ray Donovan of old. Between the NYC mayor, an unrelenting NYPD officer and clients old and new, Ray struggles to find a balance between fixing for clients and fixing himself.

To see everything on Showmax in December, click here. Please note this release schedule is subject to change.

NOT A SUBSCRIBER YET? FREE VOUCHERS AVAILABLE FOR ENTERTAINMENT MEDIA
Let us know if you want a free three-month Showmax trial voucher to watch any of these.