Good Samaritan battles City official in a bid to save lives 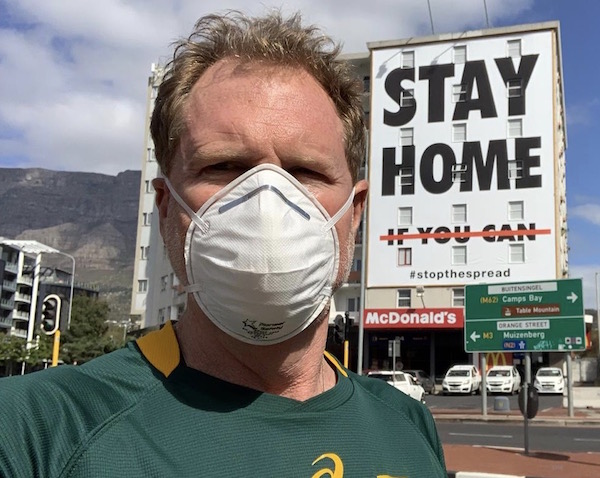 A Cape Town city resident and ‘good Samaritan’ who has invested millions of Rands in a city-wide COVID-19 public awareness drive is being pressured by the City’s Environmental Control Department to end the campaign at a crucial time in our fight to ‘flatten the curve’.

Brent Dyssell, managing director of Independent Outdoor Media (IOM), made the decision to commit his company’s funds to produce 25x large artworks to educate the city residents, both formal and informal, and reinforce the message to #stayhome with the aim of preventing infection, and possible death, related to the COVID-19 virus.

“Many of our city’s most vulnerable residents, and the homeless, were not aware of what the lockdown means and the need to stay at home” Dyssell explained. “The fact is, not everyone is fortunate enough to have access to TV or wi-fi news sources. So a vital awareness campaign like this needs mass media exposure and frequency, and could be the difference in saving lives.”

As a media owner, Dyssell sees his actions as simply answering “our President’s call ‘to play my part’ in the best way I know how, using my expertise and network to pull off something that would add to the community effort required to prevent the worst possible outcome. The President’s call to duty was re-affirmed by Premier Alan Winde and Provincial Minister Maynier subsequent statements.”

As a result, Dyssell managed at very short notice to ensure that all necessary work permits were in place, and then rolled out the expansive COVID-19 outdoor media awareness campaign in Cape Town. “Although IOM has provided the necessary funding, it really has been a group effort”, said Dyssell. “the majority of Cape Town’s established outdoor media operators jumped on board and their generous support was matched by Cape Town property owners and provincial officials.”

The latter comes as no surprise since the Western Cape Provincial Government has previously shown appreciation for public service campaigns run by IOM, culminating in a Parliamentary resolution taken on 4 May 2017 that officially acknowledged “the efforts taken by Independent Outdoor Media to unite this city, recognising our Freedom Day by placing the largest South African flag at the top of Long Street. United we stand”.

But Debbie Evans, Chief Environmental Control Officer and representative of the City’s Signage department, clearly feels differently and is leading the charge to try and derail the campaign and have all COVID-19 awareness messages removed on the basis that IOM did not “seek City permission”. This is an extraordinary position since the signage structures in are all City approved and entirely legal, and that City permission is for such public awareness messaging is expressly not required.

Disputes between IOM and City’s signage department have been ongoing since the erection of an infamous ‘Zuma Must Fall’ banner which adorned a landmark building at the end of Long Street. For the past four years, the City has gone to extraordinary lengths to prevent IOM from continuing to use this approved signage structure for commercial purposes, this while City has been openly issuing approval for new advertising signs for other large corporates, within a matter of days.

Despite numerous attempts to secure rational explanation from the City, Dyssell said he remained in the dark as to the motives behind what he describes as a ‘vendetta’.

“There is clearly something improper and untoward happening here”, he said, “and this is an extreme example of how narrow-minded bureaucracy could actually cost lives. To be 100% clear, all the COVID-19 related artworks are public service ‘notices, and are not ‘advertising signs’.

“Advertising is defined as ‘the activity or profession of producing advertisements for commercial products or services’ and it is wholly evident there is no gain here for anyone apart from unity, and saving lives we hope. I am funding this at my own expense and my broader aim is to penetrate deep into our more densely-housed and highest risk TB and immuno-compromised communities, where the potential for infection and death is the very greatest to our City.”

Around the world, city leaders and municipalities are coming together and pooling resources to make sure people stay home. And public-private partnerships have been making an impact in communities and cities from London and New York to Sydney and Berlin with a simple goal: reinforce the message to stay home and save lives.

The lack of appropriate and satisfactory explanations from City has left IOM desperate for answers. “What possible issue could the City have?” Dyssell asked. “It just seems insane that some City employees would put people’s lives at risk to satisfy a personal agenda or engage in some sort of misguided power-play. At some point, you have to stand up and call out leaders for not having the courage to support the people who are committed to the city. I think most conscious Capetonians would be ashamed to hear how these efforts have been blocked and rejected,” Dyssell added.

“If ever there was a time when we need to prove that we are in this together, it’s now,” he concludes, “but that’s never going to happen if we can’t hold City official accountable for their actions.”

Meanwhile, the City’s mayoral committee member for spatial planning and the environment, Marian Nieuwoudt, told IOL compliance notices had been issued to various parties over infringing out of home media bylaws and advertising regulations, including Dyssell. Nieuwoudt said posting any outdoor signage without the express permission of the City contravened signage bylaws.