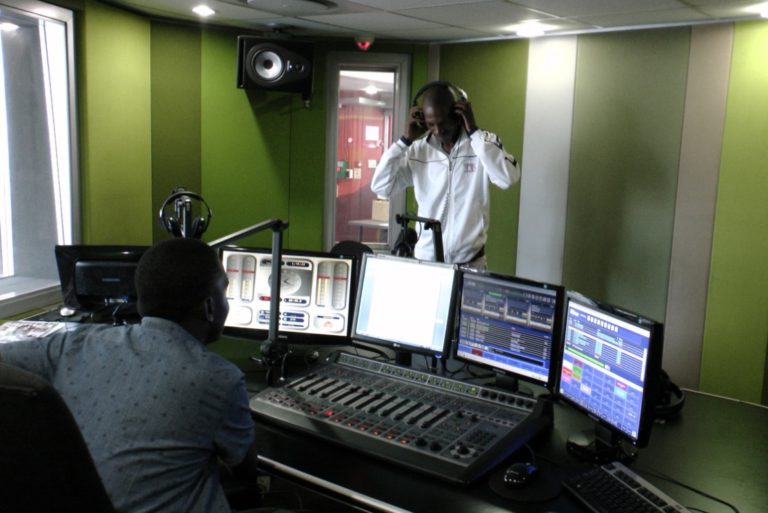 Community radio stations need to use technology and work smart so they can produce the local news and current affairs content necessary to keep their listeners.

Every community radio station in the country has a mammoth task. They must produce five news bulletins every hour, 12 hours a day, five days a week. At all costs. They have scarce resources and few reporters to make this a reality and there is currently no sharing or syndication of news between stations. So, even though there are more than 200 community radio stations across the country they each work in silos, producing news without help from or collaboration with anyone else.

To reach this target of bulletins, often a news editor and a news eeader sit in front of a computer and copy down stories from websites (local and national), translate the copy into an African language and read it out on air.

This isn’t the hyper-local, independently produced news or current affairs content that the listeners crave. Aside from the translation, the station often isn’t adding value to the news cycle. The listener could just as easily glean most of this content from Facebook or Google. And this is largely because the stations are trapped in a process of producing quantity over quality. And they are in competition with each other, rather than pooling their resources. Unless there’s a huge injection of cash and personnel into community radio there will have to be an ideological shift to solve this problem.

I founded Citizen Justice Network (CJN) in 2015. It is a project at Wits Journalism that trains community paralegals to be radio journalists. I have recently left the project, but for many years I conducted trainings in writing and media ethics to radio stations all around the country. The lesson that I tried to stress to people working in community radio stations was that their local news content is what sets them apart. Large news organisations under financial pressure are increasingly becoming Johannesburg, Durban and Cape Town -centric. They would love to have stories from distant corners of the country.

However, programmes that have tried to monetise content from the community stations and sell it to mainstream media are plentiful, and all have failed. The stations need to ignore the mainstream and look to each other for salvation. The way to achieve this goal of quality local content is to share news, tip-offs and fully written bulletins with each other. This makes sense because if you are importing a section of your content from another station you can focus on producing a few quality pieces and not spread yourself so thin.

Cliff Shiko, ex-current affairs producer at Alex FM (a prominent station in Alexandra township in Johannesburg), set up a prototype for syndication simply by using WhatsApp. He would encourage news editors and reporters from “rival” radio stations to post stories in the group. If you were part of the group then you were free to use the stories at your station. This way you could get news from areas where you have listeners, but no reporters.  Shiko was a strong believer in this type of synergy. However, it was outrageously lopsided and Alex FM ended up posting most of the shared content and reaping very little in return.

Since leaving Citizen Justice Network I have co-founded the podcasting company Volume and we are busy negotiating with community radio stations to podcast their premium content. This, we believe, is a step towards the stations finding an audience beyond the reach of their transmitters and it may be an entry point to them syndicating their content among themselves.

An amicable business agreement needs to be reached for how much a station should pay to buy another one’s content. And one of the reasons this has been so resisted is ideological. Community radio stations have become so accustomed to being paid for flighting content (rather than paying for content), that they have become entrenched in the idea that their airtime is their lifeblood rather than the content they produce. It is like being stuck with selling a raw mineral like gold rather than the much more valuable jewellery you could otherwise craft out of it.

Local government buys hours of airtime on community radio stations. This is the main way in which the stations stay afloat and once the government has bought that time they can do whatever they like with it. They can peddle propaganda and fake news, promote government projects and refute problematic rumours. Now, this isn’t just a breach of editorial integrity, it also undermines the other programming that is free and fair that exists on the station. Because, let me be clear, there is quality content lurking in corners of community radio.

Bricks Mokolo, a community paralegal in Orange Farm, south of Johannesburg, has built up an incredible following on the very popular station Thetha FM (now based in Evaton). When he goes on air, the waiting room adjacent to the studio floods with people from the area wanting to see him and reap legal advice from him. As soon as they hear his voice on the radio they rush out to catch a taxi in order to meet him at the station.

He has several shows: one of them is produced by CJN, another is on housing and a third is on the state of the nation. It is this specialized, popular, engaging content that we need to highlight and the stations, in turn, need to monetise. Would a station in KwaZulu-Natal be willing to pay for such a show that is focused on the Vaal? I think as we proceed with the podcasting of shows from various radio stations then we will at least see if there is an appetite from the audience for quality content outside of their confined broadcast areas.

What I would like to see is a sharing of short news bulletins between the stations – perhaps across a software platform that makes sure that you broadcast as many from others as you share. And I would like to see the quality current affairs content (like that done by Mokolo at Thetha FM) be put up for sale. I believe, as soon as a station understands they can sell a drama or a current affairs show for profit then they will be incentivised to put significant resources into such a project.

There is a fear that this could homogenise the stations: that you would tune into any community radio offering around the country and they would all sound the same. However, I would argue at the moment they don’t have the resources to produce 24 hours of content every day and focusing on a few prime products and monetising them is the way forward. This is how the beloved, eternally precarious yet exciting community radio sector is going to survive.

This story was first published in the June 2020 edition of The Media magazine. The digital magazine can be read here.

Paul McNally was a Knight Visiting Nieman Fellow in 2016 at Harvard. His research there focused on how community radio can use technology to evolve its news output. He is the Founder of Citizen Justice Network, an organisation that trains community paralegals to be radio journalists and is the author of the non-fiction book The Street: Exposing and World of Cops, Bribes and Drug Dealers. He has 15 awards for his work as a journalist and media developer and is the producer of South Africa’s first investigative podcast, the award-winning series ‘Alibi’. @mcnallypm