LATEST NEWS
Home Out of Home Events State Theatre Fringe Programme: Gina Mabasa up next to perform live on YouTube

State Theatre Fringe Programme: Gina Mabasa up next to perform live on YouTube 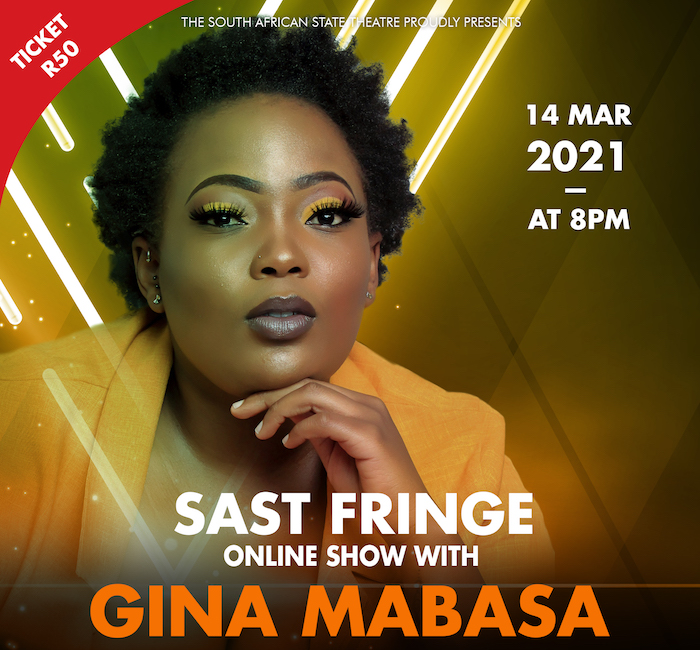 [SPONSORED POST] Gina Mabasa will be performing online on The South African State Theatre’s YouTube channel on the 14 March 2021 at 20h00. Tickets cost only R50 and are obtainable from Webtickets online.

“No matter where you’re from, your dreams are valid.” ~ Lupita Ngong’o

On June 22, in the year 1993, an exceptional, uncommon and out of the ordinary person graced us with her music and talent: Gina Mabasa.

Her journey took off at the age of 12, at church, where she discovered her singing capabilities and she took her talents to stage. After years of unfolding this gift, Gina joined the South African Music Award (SAMA) winning, Tshwane Youth Gospel Choir in 2009.

Mabasa rose to fame in 2013 when she became part of Team North West in the South African choirs show, Clash of the Choirs, mentored by the legend himself, Sipho Hotstix Mabuse. In the same year, she worked on the Samsung S4 Launch with South African recording artists RJ Benjamin, AKA (Kiernan Forbes), Ayo Solanke, Neil and Itu Tshabane. She was also a choir member in South African Idols season 9.

In 2015, she furthered her musical studies at the Vusi Mahlasela Foundation, focusing on music theory and instrument (bass guitar) with Jonas Gwangwa. It was later that same year that she cast in a play, AMANDLA the Musical.

As an exceptional talent, Mabasa knows all corners of her capabilities, and that her dreams are valid and she will grace greater stages.