Back with a bang: Radio Days presents audio amplified 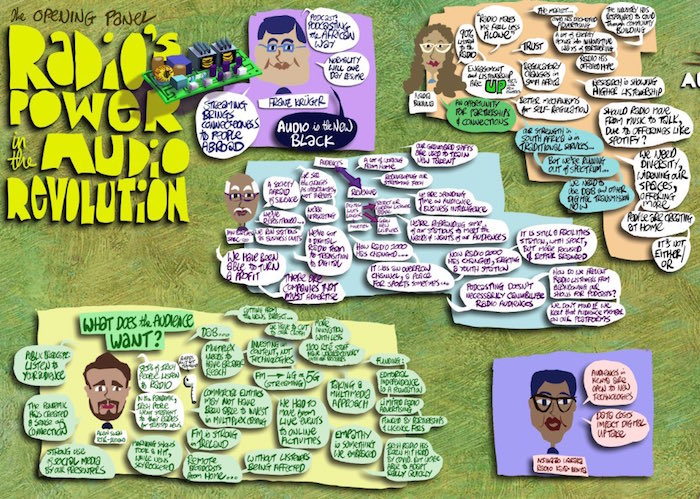 Radio Days Africa is back with a bang! The theme for the 2021 edition of the conference is Audio Amplified, which aims to touch on the growth of audio consumption in a multi-platform broadcasting environment.

One of the many broadcasting platforms available is campus radio, and to whet the appetites of delegates right from the get go, the morning session included an engaging discussion between some of the key stakeholders in the South African sector.

Campus radio stations are generally based at or attached to tertiary learning institutions, and have a rich history of offering experience, training and development to radio enthusiasts with dreams of long careers in front of or behind the mic. As Nel put it so strikingly, “it’s so important for us as skills developers to train well-rounded radio professionals”.

The great irony of campus radio as a training ground is that the sector itself receives little formalised assistance and training from elsewhere. This creates challenges that hinder their ability to amplify the work they already do. During a global pandemic, however, ‘what they do’ may simply be just keeping the lights on, and their presenters on air on a day-to-day basis.

Pheelwane offered an optimistic view on how the pandemic has affected her station, largely because SMU FM is directly linked to a Health Sciences University. According to her, people actually started noticing the station more as a trusted (free) source of reliable COVID-related information.

The panel agreed that they had to get creative about this and their programming when lockdown first hit, in order to educate and inform their audiences properly. Mental health was one of the more prevalent content topics that has come up in a big way over the past year. “We started having more talks about it, and running adverts too,” Pheelwane told the panel.

According to Michael Bower, the same goes for GBV, alcoholism and other community-related issues that have gained additional prominence as a result of the uncertainties and anxieties related to the pandemic.

Bower also touched on the TUKS FM not having fibre internet in the studio when lockdown hit, and how presenters had to pivot in lockdown by starting to broadcast remotely via WhatsApp.

The other panelists echoed internet connectivity and data challenges as a barrier to entry for listener streaming, and for their presenters (mainly volunteers) to broadcast remotely. Assuming a move to streaming for listeners with limited data to use between social media, radio, podcasts and more might be asking for too much. This is a notable barrier on top of campus radio reach already being restricted by the specific geographical footprints ICASA licenses them to broadcast to to begin with.

Challenges aside, there is hope for the future. Pheelwane suggested more interactions between campus radio stakeholders as a way to better support each other, which in turn will help to nurture the sector more collectively. “The more we can share ideas, the more we can learn from each other,” she added.

Bower nodded in agreement, but not without adding how crucial it is for campus stations to do what they can to stay relevant in a competitive digital broadcasting landscape. Charonike closed out the session by reminding everyone that with campus radio “we’re not talking to an age group … we’re talking to a mindset”.

The second session of the day — and the formal opening of the conference — was headed up by Franz Krüger (head of journalism at Wits University). His opening remarks touched on companionship being “at the heart of what we do” in the radio industry.

Listen to the audience … at all times

Nadia Bulbulia (executive director of the NAB in South Africa) echoed these sentiments and reiterated the role of radio in keeping communities connected and engaged, especially during what was (and continues to be) a very difficult moment for people from all walks of life.

The session doubled up as a check-in for how radio stations were coping in the midst of these challenging times, while also planting seeds relative to how radio is positioning itself within the changing audio consumption landscape. This is a topic that will be discussed in depth across the entire conference, but in this session contributors Ian Plaatjies (chief operating officer at the SABC in South Africa), Nsinazo Waraka (CEO of Radio Kaya in Kenya) and Alan Swan (head of branded content partnerships at RTÉ in Ireland) laid out their ideas to help set the stage for later discussions.

Plaatjies was quick to refer to the changes in the audio landscape as “an opportunity, not a threat”. He suggested that the power of radio hasn’t been diminished, and on the contrary, an integrated business model (like that of the SABC) presents new opportunities for audiences and revenue. Although he spoke excitedly about the “roughly 30% year-on-year migration from traditional radio to digital in South Africa”, it was clear he was still somewhat cautious, also stating that the public broadcaster has opted for a dual strategy (slow and steady) approach, in order to protect the existing audience base.

Alan Swan also works for the national broadcaster, albeit in his native Ireland, and one of the first things he reiterated during the session was that it should listen to its audience at all times. He sees countless opportunities alongside a long list of challenges for radio in the coming decade, especially because of the way audio consumption habits have changed over the past year. The South African market may be trialling DAB+ (something that Nsinazo said the Kenyan market is open to as well), but Ireland has already moved away from this digital technology due to slow takeup, high costs and geographical logistical issues.

Swan sees 5G streaming as the next big method of audio consumption, but if data costs and connectivity problems in Africa (which came up in the first session today too) continue to be a barrier to entry, DAB+ might just be the best case scenario for the medium term.

No matter how audio will be consumed in the coming years, the session reiterated that radio should always be something that gives the listener exactly what they want. During the early phases of the pandemic, radio stations across the continent tuned into this kind of thinking by turning up the empathy dial for listeners who lost their jobs, loved ones, or got sick themselves. In spite of radio advertising being decimated during this period, an optimistic view from a content creation standpoint has helped millions of people around the world to keep going, even if just for one day at a time.

At the same time, stations and brands have been forced to innovate and fuse partnerships that may have never been considered before the “new normal”. This has not only helped the key players in the industry to survive, but if Bulbulia’s projections about the upcoming RAMS are to be believed, this kind of thinking may have led to a sharp increase in radio listenership figures too.

“We should look for the opportunities that can arise out of this difficult time,” Kruger said in closing the session. By doing so, we may just enter into a new phase of audio amplification that can take the industry to an entirely new level.