Leading KwaZulu-Natal radio stations speak in one voice for unity 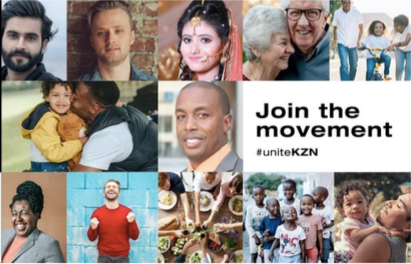 Five radio stations in KwaZulu-Natal – East Coast Radio, Gagasi FM, Lotus FM, Ukhozi FM and *Vuma FM – have taken the unprecedented decision to read from the same script and spread the same word with the aim of united the province.

#UniteKZN is a much-needed campaign, conceptualised with the aim of uniting KwaZulu-Natal in the wake of recent events. After the wave of violent looting that spurred racial divisions in the province, the biggest stations – mouthpieces to millions – came together to share messages of unity.

Ordinarily, these media giants cater for different listeners and fight to become the most relevant station with the most listeners in the province. But as proud representatives of KwaZulu-Natal, it was decided that to preach unity, they should also display unity. KwaZulu-Natal is known as the most culturally diverse province in South Africa and these radio stations want to portray that by joining hands, they share a common message.

The #UniteKZN campaign launched on-air on Friday during the afternoon drive shows on the respective stations. This included a virtual round table conversation between one presenter from each station, talking frankly about the impact of the recent events and what they could do to come together.

“This comes at a time where we need to all clean up our act, not only to preach unity, but also show unity in action. Although commissioned and conceptualised by radio, this campaign will spread far beyond the airwaves in reaching the ears, eyes and hearts of our people,” the stations’ management said in a press release.

“It goes without saying that the results of these unfortunate events will be with us for a long time, having sowed divisions and mistrust amongst the very same people who make KwaZulu-Natal what it is today – the warm, friendly, creative, innovative and proud province.”

And they continue: “This campaign is not about looking back – it’s about looking forward to all the things that we all love about KwaZulu-Natal. The entire province stands to benefit greatly from this initiative as it is also about creating opportunities, rebuilding businesses, cleaning up our communities, giving to those in need, promoting togetherness … basically revisiting and practicing the concept of ubuntu. In isiZulu we say, izandla ziyagezana and we look forward to seeing the results of these hands that keep each other safe in order to be of service. Join the movement for unity in KwaZulu-Natal.” #UniteKZN

*VumaFM is owned by Arena Holdings.