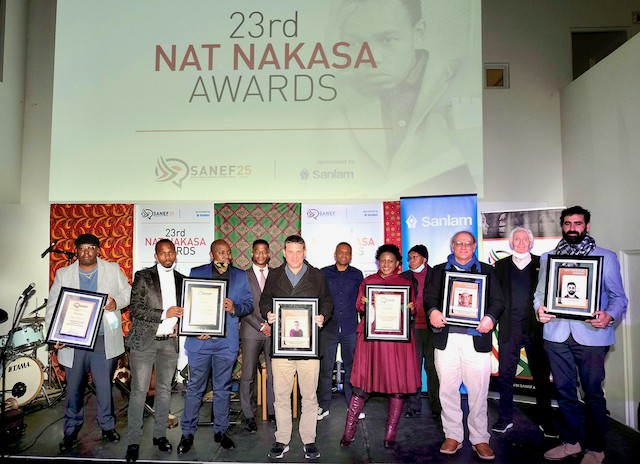 The award citation states: “Since 2018, this small community news agency has persisted with a series of investigations into the National Lotteries Commission (NLC) that have uncovered corruption, maladministration and nepotism. Such bold and principled reporting had consequences: threats, formal complaints and several court cases followed which strained to the utmost the resources of GroundUp.”

In a statement, SANEF said, “The news agency’s work in general – and its reporting on the lotteries scandal in particular – provides a sterling example of good community journalism in action.”

We are honoured by this award and the recognition of our work. For nearly a decade GroundUp’s reporters – both staff and freelancers – have been telling the everyday stories of people in South Africa (and sometimes other countries, like Zimbabwe). They have uncovered human rights abuses by the state and often corporations. But they have also reported victories, small and large, in the courts and on the streets, in which people have expressed or won their Constitutional rights.

Our lottery coverage was not a lone effort. Anton van Zyl, the publisher of Limpopo Mirror and Zoutpansberger, two community newspapers in Louis Trichardt in Limpopo, has worked with us and deserves the award as much as we do. Jacques Louw, our lawyer, has helped us get our facts right and to date successfully responded to the multiple lawsuits and press council complaints against us. AmaBhungane has worked with us on some of our lottery stories and advised us. Daily Maverick, whose CEO Styli Charalambous won the main Nat Nakasa award this year, The Citizen, News24 and Daily Dispatch have consistently republished our lottery stories. When threatened with legal action, The Citizen and Daily Dispatch stood with us.

And still no arrests

The Lottery was started more than two decades ago with the rationale that about a third of the money spent on every ticket would go to good causes to help develop the country. Similar games to raise money for charity were outlawed. We have shown that a significant amount of this money is being stolen. The lottery is in large part funded by low income households. It is their money that is being misspent.

In South Africa journalists are protected by the Constitution and an independent judiciary. Contrast this with the plight of Hopewell Chin’ono, a Zimbabwean journalist. He has been in and out of prison the past year for just doing his job. He was denied his passport by a Zimbabwean court on Friday, preventing him from travelling to South Africa to deliver the keynote address at the Nat Nakasa awards in person. Instead, he delivered a brave speech via video recording in which he pulled no punches criticising the human rights violations of the Zimbabwean state and other African governments.

After more than three years of reports by GroundUp and others, providing unequivocal evidence of corruption, not a single one of the people we’ve implicated has been arrested, charged or faced any substantial consequences.

This raises troubling questions about the competence and integrity of the police, the National Prosecuting Authority, the Legal Practice Council, and the Ministry of Justice.

© 2021 GroundUp. This article is licensed under a Creative Commons Attribution-NoDerivatives 4.0 International License.