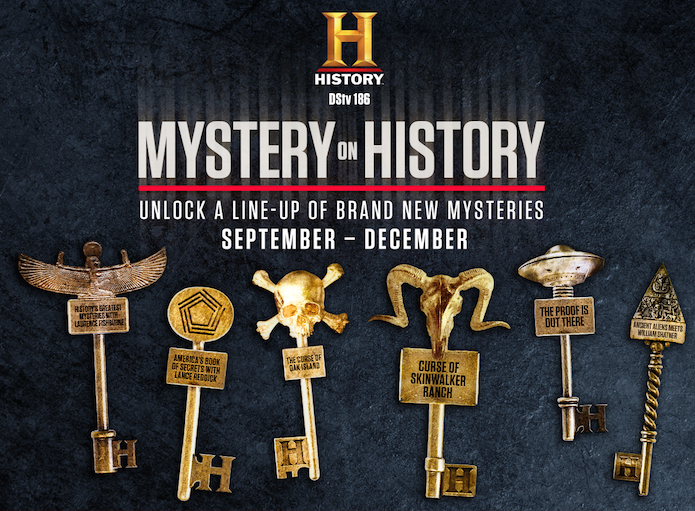 [PARTNER CONTENT] The History Channel Africa (DStv 186), unlocks Mystery on HISTORY®, a collection of fan favourites and brand-new seasons of popular series. From September to December, viewers can expect perplexing tales of disappearances and secrets, UFO sightings and alien conspiracies.

The Curse of Skinwalker Ranch S2 kicks things off on 6 August at 19h25. The show focusses on Utah’s Skinwalker Ranch, that has been the site of hundreds of reports of paranormal and UFO activities for more than 200 years. With astrophysicist Dr. Travis Taylor and a team of scientists and researchers, they attempt to unveil the secret of the notorious Skinwalker Ranch.

Audience favourite, The Curse of Oak Island S8 has all new episodes continuing through September with explorers Rick and Marty. In the biggest season yet, the team is determined to dig up and locate the fabled “Chappell Vault.” The vault refers to a dig undertaken by William Chappell, who, while exploring the island in the 1930s, found an axe, an anchor fluke and a pick. The season finds the Lagina brothers taking a closer look at that dig site for other treasures or clues.

The UnXplained 2 starts 15 October and finds the iconic and much-loved William Shatner back with a new season in a quest to find the answers behind popular mysteries and phenomena. From delving into the stories of great impostors who are both daring and baffling, to probing the five senses and finding the answer to whether humans really have a mysterious “6th sense,” Shatner explores it all.

The big names remain on HISTORY as mystery season continues with Hollywood’s Laurence Fishburne and Lance Reddick. Academy Award nominee and acclaimed actor Fishburne, famous for The Matrix and John Wick movies, returns to host History’s Greatest Mysteries PT2. Starting on 14 November, the succession of investigative specials takes the world’s most well-known mysteries, and challenges everything we know about them. New evidence and perspectives, including never-before-seen diaries and advanced DNA testing will unearth brand-new information on some of history’s most famous and puzzling chapters.

UFO Conspiracies: Do You Believe? explores the question of whether aliens really exist.Airing on Saturdays from 11 December and hosted by Craig Charles, this gripping new series will tap into recent mysterious events with amazing never before seen conspiracies. This series will share accounts and footage of experiences of alien contact with detailed forensic scrutiny to discover whether there really is something out there. Featuring interviews with leading experts, UFO Conspiracies will lead the viewer inside some of the most unbelievable sightings ever.

Following on this theme is The Proof Is Out There, starting on 11  December. Each episode analyses and passes verdicts on several seemingly impossible things ‘caught on film’, including giant beasts, UFOs, apocalyptic sounds, hairy humans, alleged mutants from the deep and many other cases. Host and veteran journalist Tony Harris takes nothing for granted in his search for answers, tracking down eyewitnesses, putting each photo or film through a battery of tests, calling out the hoaxes, and highlighting the most credible evidence in an attempt to better understand our world.

Wrapping up Mystery season on the HISTORY channel, is the definitive special Ancient Aliens Meets William Shatner 12 December. Presenter, Giorgio A. Tsoukalos, the biggest advocate of the “pseudoarchaeological” theory that ancient alien astronauts interacted with ancient humans, pairs up with the iconic Captain Kirk of Star Trek fame. The once off two-hour show with the man who “boldly goes where no one has gone before” finds Shatner and Giorgio together with the Ancient Aliens team exploring and interrogating everything from human origins to ground-breaking archaeological finds.

On that note, fan favourite Ancient Aliens S13 also makes a comeback to the channel next year on January 8th. The season finds our ancient alien theorists in search of proof that extraterrestrials inhabited the earth thousands of years ago and shaped mankind as we know it. As humanity prepares to establish colonies beyond earth, are we simply realising mankind’s future or returning to its extraterrestrial past? And when humans become the alien visitors on other planets, what or whom will we encounter?

Sponsorship and advertisement packages are available from DStv Media Sales for these highly rated shows, featuring some of Hollywood’s biggest names.  Unlock the secrets of the world’s greatest mysteries with the History Channel and open the door to unmissable sponsorship opportunities for your brand.