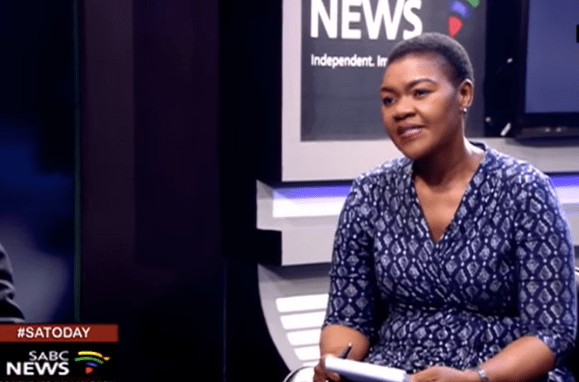 Media Monitoring Africa and the SOS Coalition take a look at the controversial firing of the SABC’s head of news, Phathiswa Magopeni.

Few will have welcomed the news that the SABC fired its head of news and editor-in-chief, Phathiswa Magopeni. Given that it is the SABC, the news has been met with a range of views and opinions, from conspiracy theories to outrage.

Media Monitoring Africa (MMA) and the SOS Coalition have been among Magopeni’s strongest supporters. Her commitment to editorial independence was one of her greatest attributes. Magopeni oversaw the latest version of the SABC editorial policies, which we welcomed and applauded. One of the big battles we had been fighting since the editorial policies of 2004 was around the final decision-making power on news and current affairs. It was deemed to belong to the CEO of the SABC.

Under Hlaudi Motsoeneng’s reign, the CEO was ignored and Motsoeneng opted to make himself supreme commander of SABC as chief operating officer, and the final arbiter for news and current affairs. It was a disaster which MMA and the SOS Coalition successfully challenged in court.

The current SABC editorial policies are very strong, and one of the most important and positive changes is that the group executive of news and current affairs (Magopeni) is the editor-in-chief.

The news that in late October 2021 the SABC had broadcast a news and current affairs programme in violation of a court order is a serious matter. It was this broadcast that set in motion the events that resulted in Magopeni being fired. Being in contempt of court is bad enough, but failing to act on such a matter would be to show the middle finger to the justice system and to undermine its integrity and authority.

In this regard, the SABC had to take action, which it did through a disciplinary process against Magopeni.

Of course, things are never straightforward when it comes to the SABC. While Magopeni has final editorial say and argued that she did everything in her power to ensure that the programme did not go on air, evidence was led that the technical error with broadcast codes that caused the programme to be aired was the responsibility of the Video Entertainment division, responsible for TV broadcasts.

We know from the hearing that Magopeni said that she should have been invited to participate in the investigation to determine the facts about the erroneous broadcast before any disciplinary process.

Such hearings are usually not open to the public, but thanks to Magopeni agreeing, the disciplinary process was broadcast live.

The finding of advocate Nazeer Cassim, who conducted the disciplinary hearing, states: “I find that Ms Magopeni is guilty of the misconduct of not having taken appropriate steps to ensure that the interdicted report was not aired.

“However, the employee’s written closing argument as prepared by Ms Carvalho, regrettably complicates matters and casts the employee in a bad light. In paragraph 36 of the heads, it is asserted that ‘the charges brought against the employee are a farce and done so hastily’.

“If, however, Ms Magopeni makes common cause with the view of her attorney, then the board must, in its discretion and decision-making power, adopt a sanction which is consistent with that of a breakdown in the trust relationship between employer and employee. In short, it is now upon Ms Magopeni to decide her own future with the SABC.”

According to the letter sent to Magopeni, she failed to retract the comments or submit evidence in mitigation of her being found guilty of one of the charges. There may well be errors in the ruling. One of them was that Cassim directed the SABC board to determine the sanction.

While well-intentioned, the instruction would have seen the board overstepping its mandate. As is clear from the editorial policies, the head of news falls under the GCEO, not the board. We should consider that while it is enticing to invite board intervention, it was precisely these oversteps in previous SABC boards that saw direct interference in news. Raymond Suttner raises additional issues of concern in this piece.

It is clear that Magopeni disagrees with the process and the outcome, and we encourage her to pursue all avenues to ensure a just and fair outcome.

It is important to note that the issue was not trivial. As head of news, it was important for Magopeni to shoulder some measure of accountability for the error, even if many of the processes were beyond her control. Whether that should have resulted in her being fired hinges on the process outlined in the disciplinary findings and letter, and that is likely to be a central issue of a challenge by Magopeni.

Before the hearing, Magopeni had levelled allegations of editorial interference against the SABC GCEO, Madoda Mxakwe, and the SABC board chairperson, Bongumusa Makhathini. The allegations are serious and are summarised, along with the actual letter by Magopeni, here.

The day before Magopeni was fired, on 27 January, the SABC board issued a press release setting out the process that was to be followed.

“A Special Committee of the Board has been established to deal with the allegations against the Chairperson fairly and expeditiously. The grievance against the GCEO will be dealt with in terms of SABC employment and disciplinary policies,” said the board.

It is critical that the process involving the SABC board chair and GCEO continue despite Magopeni’s dismissal and with her full involvement. It is essential that the issues and allegations are aired and that the process is transparent and accountable. We call on the SABC to urgently inform the public as to how the process will continue to unfold.

Calls for Parliament to intervene are misplaced and inappropriate for two reasons.

Second, parliamentary intervention would constitute a direct incursion into the internal affairs of the SABC in what is a senior management responsibility.

Further action on the legality of the disciplinary process and Magopeni’s dismissal should be dealt with through the courts.

The completely unacceptable behaviour by the ANC in seeking to blame the SABC for the party’s poor performance in the local government elections, as well as threats made by the ANC’s Jessie Duarte at the election results centre, need to be condemned in the strongest terms.

The SABC did issue a statement condemning the comments made by Transport Minister Fikile Mbalula, and there were media reports that the SABC had lodged a complaint with the Electoral Commission over the verbal threats by Duarte.

It may be true that there are ongoing efforts to interfere with the editorial independence of the SABC that aren’t in the public domain. As the public broadcaster, the SABC will always be the focus of concerted interference by political parties across the board.

What is new is that during the past few years the current board and SABC senior executives have made numerous and clear efforts to assert and protect the independence of the broadcaster. The SABC board rejected numerous hamfisted efforts at control by former ministers Nomvula Mokonyane and Stella Ndabeni-Abrahams.

That the board has distinguished itself for its independence over the past few years makes the allegations by Magopeni all the more concerning.

Based on the series of events that resulted in Magopeni’s dismissal and the as yet unanswered allegations made, what further mechanisms could be implemented to protect editorial independence?

Whatever we may feel about the decision to fire Magopeni, or the allegations she has levelled against the SABC chair and the GCEO, it would be a gross mischaracterisation to suggest that the SABC has returned to the Motsoeneng era.

We have seen an open disciplinary hearing process that is likely to be challenged. The board hasn’t ignored the charges, and while we know from leaked media reports that there are clear factions, neither side has an interest in sweeping the issues under the carpet. What we need to see and will continue to call for is openness, transparency and accountability.

The SABC will continue to be subjected to pressures and efforts to influence its news and current affairs. This is why MMA and the SOS Coalition have been lobbying and advocating for public broadcasting to be protected and sustainable.