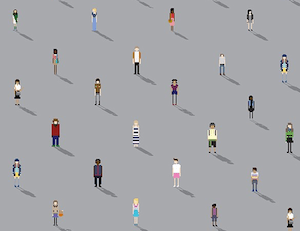 I recently found myself reading an article about ‘conversion rate optimisation and growth hacking’. About five minutes in, I realised that I didn’t have the foggiest idea what the author was talking about. Digital media constantly generates new jargon and theory, which creates a veil of confusion.

Every time there’s an innovation or a change to something digital, we’re reminded that there are new things happening that we don’t yet understand. We feel as if we need to unlearn everything we know and start again.

We’ve been so caught up with the digital realm’s rapid changes that we’ve missed the bigger truth: digital has changed us… our attitudes, our values and our beliefs. People have changed fundamentally.

In boardrooms, the conversation about digital media still treats it as a separate world we plug into, away from the outside world, as if we go about our lives behaving by and large in the same old ways, and then, when we have time, we “spend some time with digital”. Either that, or the digital realm is spoken of as a world inhabited by strange, clever, alien beings who have different values and behaviours from ours, and treat digital as a channel we can use to reach them.

In reality, digital has become completely integrated with our daily life. It’s just that the immersion has happened slowly and we haven’t noticed it. We’re like frogs in hot water.

It’s not that we’re doing radically different things. We still watch TV, but nowadays we watch it via Netflix or Showmax instead of Dstv. We still go on holiday, but instead of hotels, we’ve started using Airbnb. When we need a lift, we use Uber rather than traditional cabs.

In some instances, the change is more pronounced. Crowdsourcing platforms like Kickstarter take the power away from the boardroom table and deliver it to consumers who can put funding towards an idea they like. They’ll help to heave it into reality, no graphs and focus-group feedback necessary. After all, what better concept validation than the consumers agreeing to pay to develop it?

… digital has changed us… our attitudes, our values and our beliefs

When behaviour changes at such a macro level, it affects our attitudes, values and beliefs in everything from power and intellectual property to accountability and influence, and much besides. A few fairly random examples will have to suffice.

Before digital, we believed that power should be held by few. Today, we believe that power is created by many. We’ve moved away from closed systems to open systems as Wikipedia, UNIX and Linux. Digital has moved us from being leader-driven to being peer-driven. Bloggers and vloggers wield power because no one has to listen to them, which is why they’re so powerful when people do. Other things have changed. We expect access to everything 24/7.

We’re also more fickle, less tolerant and have shorter attention spans. The list goes on. Digital has profoundly changed our values. And when values change, so does everything.

To bring it back to our industry, the change means clients no longer need a digital strategy. Now the digital strategy is the business strategy – and its fundamentally different to what it would have looked like 10 years ago. And at an operational level, the silos and separate platforms agencies used to distinguish parts of their businesses are no longer useful. You can’t compartmentalise communication anymore.

The implications of digital are far greater than can be addressed by bolting a digital strategy onto existing approach. They demand a whole new approach – one that resonates in today’s real world.

#TMOinsights2016 is themed around the idea of ‘change’ in the media.