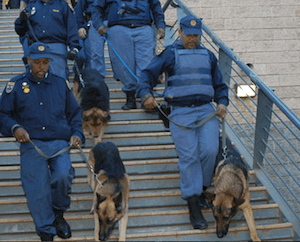 The South African Police Service (SAPS) is increasingly using social media to bolster its public image. With around a dozen image-laden tweets and posts each day, the SAPS has used its Twitter and Facebook accounts to bombard its many thousands of followers with images of officers hard at work.

This comes in the face of a common public perception that police are corrupt and brutal.

It is hard not to be impressed by the SAPS’ tweets and posts. Smiling officers pose with piles of recovered loot and narcotics, while serious-looking officers comb through crime scenes, attend roadblocks, and saturate public spaces in blue.

While these images should be celebrated, they should also be questioned. Their manufacture and publication are no accident. Rather, they are part of a carefully scripted performance in which the SAPS is heavily invested.

It is a performance which suggests the SAPS is a rational, evidence-based, professional police service that conducts common sense activities that make South Africa safe. Unfortunately things aren’t that simple.

What the pictures don’t tell

As I scroll through the SAPS’ tweets each day I am reminded of various experiences I’ve had with officers over the past decade, both as a police reservist and through participant observation for my as-yet-unpublished doctorate. One memory is of weekly ‘outreach’ initiatives which I took part in in 2012.

On paper they were excellent initiatives. Each week a dozen or so station employees would hit the streets of the precinct on foot, ostensibly to strengthen police-community relations.

The station’s communications officer provided hundreds of copies of information leaflets which patrollers were expected to hand to community members as they chatted with them. A marked police van lead the group, and a colourful SAPS banner was hauled out, but usually only when a camera was present.

Capturing each patrol with pictures – similar to those now tweeted by the SAPS – was central to these events. But the story told by the pictures did not accurately reflect what I witnessed on the ground.

At least half the patrollers were administrative staff wearing fluorescent police-branded bibs. They had no police powers, were not trained in intelligence-gathering and were not part of the station’s problem-solving apparatus. And yet their presence among the handful of uniformed officers and the police van clearly communicated the message that we were all police officers. In truth, the patrols were a way for administrators to break the monotony of their paper-pushing days.

Very few real conversations between patrollers and the public took place. Rather, patrollers seemed to measure the value of the initiatives on whether they were able to offload the photocopied sheets and pose for a few photographs.

One photograph depicted four administrators with a group of young children and two adults from the community. All were smiling. It was a joyous scene. But what one can’t tell from the image is that the adults were hopelessly drunk and could barely stand, despite it being only mid-morning.

The children, barely three-years-old, were in the adults’ care, and yet patrollers expressed no concern for their well being. Instead, photos were snapped and the patrol moved on.

The picture captured that day looked great, but the story it told was misleading.

Something else which photographs of these patrols did not capture was the way they contributed to disorder. When the allocated hour was up, patrollers worked quickly to offload remaining leaflets. They stuck them through gaps in fences and pressed them into the hands of children too young to read.

Some dropped piles into front yards from where the spring breeze blew them down the street. The resulting litter was both a bylaw offence and a contribution to disorder – in effect a contradiction of the SAPS’ constitutional mandate to “maintain public order”. Sadly, some members of the public who have tried to document this hidden side of police work have been threatened or arrested.

Having participated in numerous operations over the years, including roadblocks, vehicle check points, stop and searches and building raids, I have come to think of these performances as “public performance lies”.

By this, I mean they are rituals through which the SAPS presents itself and the country with a common sense impression of what good policing looks like. But what remains hidden is sometimes more important than what is recorded, and the police service ends up misleading itself and the public.

Public performance lies feed what I call “data performance lies”, as the SAPS tries to quantify its action. I documented this as part of an Expert Report written for the Khayelitsha Commission. Pressures placed on frontline officers and managers to meet performance targets lead many to fabricate evidence of work done.

For instance, I have on a number of occasions sat in a car with a officer while they record the license plates of passing cars. The recorded information is handed to management, or reported to the public, as evidence of cars stopped at a roadblock, when no roadblock was ever held. I call these practices internal and external lies.

Taken together, these practices create a work environment characterised by deep mistrust and suspicion. Each officer knows the other is part of a practice of deception, and so each constantly questions the motives and actions of those around him or her.

This culture of deceit was recently laid bare in the Marikana Commission of Inquiry report. In it, Judge Ian Farlam illustrated the way in which SAPS’ top management set out to intentionally and systematically deceive the commission and South Africans in a way that left him and evidence leaders “… with a feeling of absolute despair”.

It may not sound like it, but I am heavily invested in supporting the SAPS. As part of this investment I have provided the organisation with copies of my doctoral research, though it is formally embargoed until 2018.

I also believe that by maintaining a critical and questioning approach to the SAPS, I can help it become the organisation it aims to be.

Andrew Faull, Post-Doctoral Fellow at the Centre of Criminology, University of Cape Town