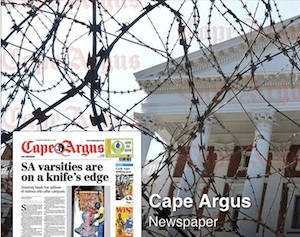 The Cape Argus deactivated its Facebook page this week after a barrage of racists comments relating to the most recent student protests at the University of Cape Town.

“We regard these comments as hate speech and the Cape Argus will not allow any of our platforms to become a haven for racists.
We will be closely moderating comments on Facebook. Posts containing racism, bigotry, or hate speech will be deleted, the user blocked and reported to Facebook for further action,” the newspaper posted on its Facebook page, which is now back up again.

Gasant Abarder, editor of the Cape Argus, told The Media Online the page was deactivated until they could find a way to ensure the platform stays free of hate speech. “We had 15 days to reactivate or risk losing the traction we had built up. Luckily, we found a temporary measure to address the problem of racist posts in response to news stories. The page was back in a matter of hours but with enhanced measures to keep things clean,” he said.

The measures included an algorithm written by staffer Lance Witten that precludes racist posts being published. “It is however not foolproof and we’re attempting to find a permanent solution,” Abarder said.

As many media houses have discovered, it takes quite a few people to fully monitor social media platforms. “It’s a full time job!” says Abarder. “For the moment there are about four of us, watching the page like hawk at various times. We can’t really moderate but we’re banking on our self-created algorithm to do the job. But if a racist comment does slip through our ‘ring of steel’ (LOL!) we delete the post, block the user and report them to Facebook,” he explains.

Independent Media, which owns the Cape Argus, late in 2014, commissioned a panel of six to look into the question of online comments after a young staff member was subjected to a barrage of abuse from some readers. At the time the panel found, “Online commentary by users of news sites is in the interests of freedom of expression, but must be tempered with the rights of readers and the public as laid out in the Constitution”. But like so many other news sites, including News24 and more recently, the Daily Maverick, landed up shutting down their comment sections, leaving readers to post on Facebook or Twitter.

Talking about navigating the tricky space between freedom of speech and hate speech, Abarder said he was guided by a simple principle. “Put all your platforms – whether print or digital – through the same rigours you would when you publish in a newspaper,” he said.

“For example, we insist on full names and physical addresses to publish letters so as to establish bona fides and publish in good faith. Why should this kind of quality control not be standard for all our platforms. After the IOL decision, we followed suit by having the same requirements to publish SMS comments as we do for our letters,” Abarder said.

Not a free-for-all for racists

“Now we’re doing the same with the review of our social media platforms. It’s the responsible thing to do. You can’t be stringent on one platform but allow others to be a free-for-fall for racists and hate speech. There is a limit to free speech when people are called monkeys and the k-word. They’re pretty easy to spot. Independent Media has also recently launched the #RacismStopsWithMe campaign – a conversation about racism in our country. We can’t thus entertain racist posts on any of our platforms.”

It was a topic for discussion recently on the page of the Facebook group, SA Journalists of the ’70s, ’80s and ’90s.

User Peter Bendheim, wrote, “The use of social media in South Africa is alarmingly toxic and completely out of hand. Some of the comments on the Cape Times page around the UCT saga make Penny Sparrow’s comments seem mild.

“When most media in South Africa like News24 stopped poisonous remarks on their web pages, that toxicity was simply transferred to Facebook where, on the pages of those self-same media, they continue with even less checks than before, and a far, far wider audience of armchair racists of all persuasions.”

Abarder said the Argus was reviewing its Twitter feed too, even though it was “slightly different”.

“Different because comments are open on Facebook. But unless we retweet a racist comment on Facebook, it won’t really get any air unless you go looking for it. But yes, there is hate speech on Twitter too and it will form part of our review.  The whole exercise started on Twitter when a user tweeted a picture of the some of the racist comments that had made it onto our Facebook page in response to the #ShackVille protest at UCT earlier this week. Our tweets and Facebook posts on the burning of pictures and damaging of property on the campus went viral and reached hundreds of thousands of people but we couldn’t allow racist behaviour to live on any of our platforms,” he said.

Other Independent Media titles haven’t yet taken the same steps. “When we informed our colleagues it was suggested that we engage Twitter and Facebook to try and develop fail-safes to include outlawing racism and bigotry from our social media platforms. So the Cape Argus will the guinea-pig to establish best practice for the rest of the group, I guess,” said Abarder.

Abarder believes journalists have to guard against stifling free speech, but he says as an editor, he also has a responsibility to provide platforms that don’t infringe on people’s human rights.

“The one doesn’t trump the other so it is a balancing act,” he says. “But I do believe that what we are doing is the responsible thing to do. We’ve also pinned a post to the top of our Facebook page to urge users who play by the rules to report abuse to us so that we can react faster.”