A bitter pill: Rejection is hard to swallow 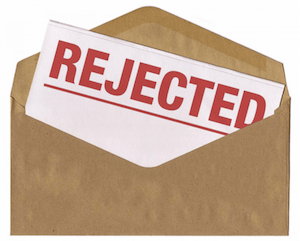 The thing about rejection…

It causes your eyes to well up, your chest to compress, and you have to wait for your vision to clear before you can pick your heart up off the floor. It’s painful. But we should learn to accept and embrace it.

Show me a writer and I’ll show you someone who has been rejected. Repeatedly.

Most freelance writers who publish with any regularity are familiar with the soul crushing experience of sending out a written piece, only to see it systematically rejected by 10, 20, 50 publications at a stretch. The process imparts this uniquely slow sinking feeling, wherein writers find themselves counting the emails that come back, one at a time, wrought with placating phrases such as, “this article just wasn’t right for us”, “we wish you luck placing it elsewhere”, and “please, submit again!”

Beneath these troubling developments the writer may feel some waning enthusiasm for the project, a tacit acknowledgement that perhaps, just maybe, the piece they worked on for weeks is no good. To be clear: This crippling self-doubt is far more damaging than the spates of rejection that all writers face at one time or another. It’s one reason many quit altogether.

It took me a bit of time to figure out I’d been looking at this process all wrong. While rejection is always a bitter pill to swallow, it’s actually one of the greatest critical tools there is. After time, you may realise rejection has played an undeniable role in strengthening your work; you may discover you’ve improved your craft not merely in spite of being rejected, but because of it.

It’s no secret that I’ve been turned down, at one point or another, by virtually every publication out there – print and digital, yeah pretty sad huh? For starters, I realise articles that were once mediocre were later strengthened when universal rejection eventually compelled me to ask myself, what isn’t working here? More importantly, I also realised some of the best critical feedback I’ve ever received has come not from peers or workshops, but from editors who rejected my work, and then took the time to tell me why they did so.

So, instead of downing a bottle of vodka, dressed in your ‘lounging pants’, and listening to Adele each time your article or story gets a death-sentence, think of it this way:

You can read rejection one of two ways: one, your piece was good, but just not for that market/editor/moon phase. Two, the editor is uncomfortable with truth or doesn’t want to offend anybody and so is gently limping away from saying anything even remotely offensive or controversial.

It’s not about you. It’s about the work. I mean, unless it is about you. I guess it could be personal. If you send a story off to an editor, and you’re currently dating his ex-girlfriend… well, that might be personal.

You HAVE to get burnt… at least a hundred times

Hate the autocracy of the kept gates all you like, but the forge of rejection purifies us (provided it doesn’t burn us down to a fluffy pile of cinder). The writer learns so much from rejection about themselves, their work, the market, the business. Even those who choose to self-publish should, from time to time, submit themselves to the biting beaks of the raptors of rejection. Writers who have never experienced rejection are no different than children who get awards for everything they do: they have already found themselves tap-dancing at the top of the “I’m-So-Special” mountain, never having to climb through snow and karate chop leopards to get there.

It teaches us when our work or our skillset is not good enough and must be made better. This is a powerful revelation. Rejection refines us. Those who fall prey to its enervating soul-sucking tentacles are doomed. Those who persist past it are survivors. Best ask yourself the question: what kind of writer are you? The kind who survives? Or the kind who gets asphyxiated by the tentacles of woe?

Form rejections won’t teach you anything other than the fact that the editor didn’t have time. Rejections that never come — a “no” by proxy — are even less valuable. Sometimes you’ll receive a rejection that just doesn’t add up, leaving you scratching your head in slack-jawed bewilderment. Recognise that some — not all, not even most, but some — rejections are as fruitful as a shoebox full of dead mice.

JK Rowling was told not to quit her day job #TrueStory

Every writer, from the tippity-top of the industry to its sludge-slick nadir, has experienced rejection. Every book, movie, or story you love? It’s been rejected. Probably not once. But dozens, maybe even hundreds of times. It’s part of the writer’s career tapestry, part of our blood and genetic memory. Rejection is part of who we are as creative beings. Might as well commiserate.

Sure, it stings… but, it still stings

Rejection always stings. It stings me, you, everybody. Nobody likes to be rejected. A writer who likes being rejected is a writer who is secretly a robot and must be smelted down into slag before he tries to kill us all because he hates our meat. Pain is instructive. And it’s not permanent. Not if you don’t let it be. Some writers savour misery like a hard candy endlessly sucked in the pocket of one’s cheek, but nobody’s got time for that. Furthermore, it leads to a swiftly-experienced version of the five stages of grief: denial, anger, bargaining, depression, and acceptance. It’s key to get to that last step as quickly as you can reckon. I actually have two additional steps in my personal process: “tequila” and “The Notebook” Your mileage may vary.

So, that little pity party you host each time you get rejected? Yeah, it’s time to let it go!

Now, excuse me while I cross my fingers and hope this piece gets published.