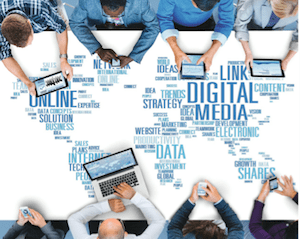 The Media Yearbook offers an important and independent overview of the media industry in 2015 and gives important insight and perspective into global trends and forecasting for 2016.  UK-based journalism innovator and co-founder of Publish.org, Sarah Hartley, takes stock of a fast-moving space.

What will the seemingly ever-faster, more plentiful and unstoppable development of digital platforms mean in 2016?

After years of being treated with suspicion and cynicism by news organisations, all the big news players can now be seen rushing to “collaborate” (the current management lingo interpretation of a word which formerly reflected a coming together of equals) with the likes of Facebook and Twitter to maintain their relevance – and, of course, find the money.Our global news industry is so reliant on the internet giants which provide the infrastructure, that any attempt to pull out a crystal ball to predict future trends has to start with an understanding of the tech agenda.

The offer on the table is basically the same across the group – join the club and get everything faster. Faster is better, the tech giants implore, today’s mobile-based consumer probably does want what you’ve got, but they want it faster than ever before.

Google has launched Accelerated Mobile Pages (AMP), Facebook is rolling out Instant Articles, Twitter wants you to have some Moments and all of these developments come against a backdrop of consumers moving to video and publishers being able to harness data which analyses every eyeball, click and share with increasing granularity.

Along with all this race to speed, another noticeable trend is rising concern about privacy and worries about the impact that living a life in public will have on society and the way we interact with each other in the future.

We’re all familiar with stories about previously unknown people thrust into the limelight for their Facebook antics, and seen job applicants fail to secure employment (or even lose employment) due to ill-judged tweets – a solution to over sharing is much needed.

Enter platforms which take away the permanence of the internet – simply wipe away those embarrassing pictures which could be unearthed in the future – and private networks with encrypted messages which only your closest friends and family can access.

To date, the best known of these ephemeral solutions is Snapchat, a mobile app with 50% of its users under 18 years old, which shares real-time images and videos that disappear once viewed and allows just 37 characters of text in messages.

It would seem an unlikely space for news brands to engage with but check out the partners and you’ll find that many of the big global players are already there – CNN, Daily Mail, ESPN, Cosmopolitan magazine etc.

Even arms of government in the UK have taken to the app in a bid to make new connections. Steve Hardy is social media manager at the Foreign and Commonwealth Office and in a recent blog post for the Comms2Point0 blog he explained how he is incorporating the app into his work.

“Piloting it at the launch party of this year’s Rugby World Cup and our annual #OpenHouseFCO has already seen some success with over 300 new connections.

Snapchat’s ‘Stories’ is one of its best features. Adding snaps to your story allows followers to view them an infinite number of times over a period of 24 hours. Most crucially they see your story in the order you added the message, which is unique in comparison to most other platforms.

Used well, this provides a brilliant opportunity for storytelling, or even, story doing. Visitors to Open House followed a route through a building from historical to the modern day workings of the Foreign Office.

“Our Snapchat story followed this journey but it was also intertwined with user experience snaps where we had visitors ‘hijack’ the channel to add their own footage to help bring the virtual experience to life.”

The need for speed

Permanence may be the logical end result of the need for speed, but those download times are what’s occupying the minds of the big news players.

At the 2015 launch of the Google Digital News Initiative for European news publishers, a hand-selected audience from the major news organisations was invited to Berlin to see what’s in store for those looking to collaborate with the tech giant.

In the business heart of the continent, I joined the representatives being shown the lightning download speeds of news delivered via AMP and offered an embedded player with revenue sharing which gives partners the ability to control the cost of advertising.

No doubt, similar events and invitations have been handed out by Facebook and Twitter – you only have to look at the partner lists – The New York Times, The Daily Mail, The Guardian, Spiegel, Bild, etc. will appear on most of them.

Which leaves a question – what does it all mean for everyone else?

What becomes of smaller publishers, independent journalists and others who moved into the promised land of democratised space of the internet to find new audiences for their important journalism?

The question of whether there is to be a super-fast space for the chosen few with the rest left behind is a concern I posed to technology commentator Martin Bryant, the editor-at-large for influential global publication The Next Web.

“I think the ‘two-tier’ question is important – more for publishers than end consumers,” he said.

“Google AMP can be implemented by anyone with the time to work on it, even if it won’t be widespread for a while yet. Those on slow connections with poor hardware will benefit from it as it emphasises stripped-down code that loads fast.”

Likewise, Facebook Instant Articles should benefit all Facebook users, as it eventually rolls out to everyone. They’re starting on iOS but will roll out to other platforms, and the expansion to Latin America shows they’re not putting emerging markets to the back of the queue.

“Publishing is where we’re seeing the two-tier problem emerge. Facebook’s Instant Articles team is only working with hand-picked publisher partners and doesn’t seem close to rolling out a tool that everyone can use.

And while anyone can implement AMP, do small publishers have the time and resources to devote to it? And can their business models work with AMP’s emphasis of speed over loading lots of ads and tracking scripts?”

The potential for divisions in the global experiences of people using the internet is nothing new
of course.

In his 2003 essay, Power Laws, Weblogs, and Inequality, the highly regarded philosopher Clay Shirky wrote: “Given the ubiquity of power law distributions, asking whether there is inequality in the weblog world (or indeed almost any social system) is the wrong question, since the answer will always be yes. The question to ask is: ‘Is the inequality fair?’”

Maybe that’s the question journalists and news organisations will be seeking answers to in 2016.