Pravin Gordhan and the SABC 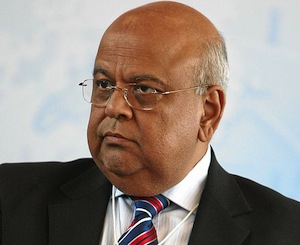 OPINION: ‘The usual manner in which Mr Zuma deals with such a conflict is to pretend to wash his hands. He is content to allow institutions to become dysfunctional and paralysed by conflict when it does not suit him to intervene.’ Carol Paton, Business Day 29/2/2015

I am sure I was not alone in murmuring “High Five!” to myself when I read the headline on the front page lead in the Sunday Times on 22 February: ‘Pravin snubs the Guptas’.

I have a friend who works on the over-budget, much-delayed Medupi project and I was told in October 2014 that all similar projects, including the Kusile coal-fired power station and the Ingula pumped-storage scheme, received notification from the Eskom head office to cut their budgets by millions of rands after former interim chief executive Collin Matjila donated R43 million from Eskom’s coffers to sponsor the New Age/SABC breakfasts. The fact that the newspaper profited at the expense of every South African whose life was being disrupted by load shedding tells.

It seems as if the African National Congress is, to an increasing extent, starting to say ‘Not in our name’ and looking forward to a new post-Zupta era when it can regain the credibility squandered during the past seven years of regression, corruption and decay. The SACP has now thrown its weight behind Gordhan.

Gordhan broke with tradition when he stipulated that the SABC and the New Age no longer had exclusive rights to his post-budget press conference and here’s the punchline in the Sunday Times front page lead:

The Sunday Times has learnt that Gordhan’s office told the SABC he would appear at its breakfast briefing only if the Gupta-owned newspaper was not involved.

Gordhan paid no heed to the ‘exclusive rights’ and ‘contractual obligation’ claims of SABC COO Hlaudi Motsoeneng and his head of news, Jimi Matthews, laughed off their threats of legal action and appeared on the breakfast shows of both the SABC ( in the absence of the Guptas) and on eNCA.

This temporary setback did not faze the state broadcaster though and, true to form, it announced that its policy of censorship by omission to protect the ANC was moving into top gear, seven months ahead of the 2016 municipal election, with a ban on all political discussion on its phone-in radio programmes.

This is a well-honed tactic, implemented for example back in 2012, when, minutes before they were due to participate in a live SABC radio broadcast, three senior journalists were informed that the programme had been canned without explanation.,

The subject was the potential media coverage of the ANC’s 2012 elective conference in Manguang but listeners never got to hear them. Or the scheduled programme.

At the time this censorship was described as ‘bizarre’ by William Bird, executive director of Media Monitoring Africa and Dr Julie Reid, a lecturer in communication science at UNISA, said it made a mockery of the concept of freedom of expression.

One wonders what they think of the latest banning order.

‘The SABC’s decision is in violation of its current Editorial Policy; its obligations as listed in the Broadcasting Act; and its license conditions in terms of the ICASA Code of Conduct for Broadcasting Service Licensees.’

Her concern was echoed by the EFF.

Afrikaans is the third most spoken language after Zulu and Xhosa and plays a significant political role, particularly in the Northern Cape. Three days later this language group heard that it, too, had been gagged by the state broadcaster. Dr Pieter Mulder, leader of the Freedom Front Plus and a regular contributor to the Radio Sonder Grense phone-in programme Praat Saam, was informed that his phone calls would no longer be accepted. “Such a ban could remain in place for a year if the election is only held in 2017, which is currently a possibility,” Mulder said.

One is constantly left nonplussed by the audacious arrogance of the SABC’s news manipulation and pro-ANC propaganda team. Just when you think that they cannot, in their hubris, sink any lower – they plummet!

They seem not to learn from history, obviously secure in their belief that political influence trumps merit.

Those who lived through the appalling SABC era when people like Snuki Zikalala and Christine Qunta suffered similar delusions, an era when the SABC was bankrupted by untrammelled looting and lost all credibility as a news organisation, are hoping that the keenly-anticipated Constitutional Court judgment on the role and powers of the Public Protector will mercifully bring a similar end to the enormously debilitating Hlaudi Motsoeneng era.

The role of Gwede Mantashe could be pivotal both in the internecine war between President Jacob Zuma and Pravin Gordhan and in putting an end to the shameful tenure of Hlaudi Motsoeneng.

Mantashe has thrown his weight behind Gordhan, publicly condemning the Hawks for their recent letter to Gordhan and in July 2014 he questioned the appointment by Communications Minister Faith Muthambi of Motsoeneng. He articulated a wide consensus within the Tripartite Alliance that Muthambi erred in this regard.

Nhlanhla Nene’s tenure as finance minister was terminated because he lacked the necessary compliance and so too was a competent and respected communications minister, Yunus Carrim, relegated to political obscurity for the same reason. Muthambi has been a less than stellar replacement for Carrim.

Last week’s news that the ANC chairperson of the communications portfolio committee, Joyce Moloi-Moropa, had resigned from parliament was not unexpected given the contempt with which she was treated by Muthambi.

What is also interesting in the looming clash between the ANC reformists and the dwindling group which regards President Jacob Zuma as an asset rather than a liability to the party and the country is the suspension in November last year of Frans Matlala from the SABC.

While the SABC’s chief operating officer (COO) Hlaudi Motsoeneng has not been suspended after almost two years since the Public Protector’s report implicated him in gross maladministration and abuse of power, Matlala got barred from the SABC after just four months.

Matlala said he was helping the Treasury who asked for his support with an investigation into the R40m new SABC studio ordered by Motsoeneng and which was never put out to tender.

According to Frans Matlala, the SABC’s chairperson Obert Mbulaheni Maguvhe ordered him on November 11 to stop helping Treasury with the investigation into the SABC studio procurement process.

It is not clear why the SABC chairperson would allegedly prevent a SABC CEO from helping with a Treasury investigation.

I am sure that both Gordhan and Thuli Madonsela would be fascinated to know why Maguvhe wanted Matlala to stop investigating what sounds like a dodgy tender.

There is nothing new at the SABC about such investigations being halted.

Maguvhe was appointed as chairperson of the SABC board by Zuma in June last year. He replaced Ellen Tshabalala who is allegedly very close to President Zuma and who eventually resigned under a cloud after racking up substantial legal bills towards which she did not contribute a cent.

Tom Eaton has aptly described the state broadcaster as “that great sucking cesspit of despair”. It just goes on and on and one longs for someone who can cleanse the SABC’s Augean stables.

Does the rift between Zuma and Gordhan and the rapidly-coalescing support for Gordhan signal the beginning of that process?