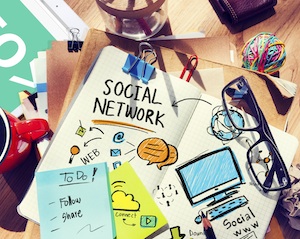 In today’s digital world, social media networks are a vital networking tool for any budding entrepreneur.

It’s not just about having a Facebook page or a LinkedIn profile, but rather about creating and maintaining weak-tie alliances and networks that meet the specific needs of each entrepreneur.

So what is a weak-tie alliance?

Very simply, it’s the interpersonal ‘bridge’ that exists between social networks and the individuals within them. The strength of the tie is dependent on factors such as time invested, emotional intensity and intimacy involved, and how well the parties complement one another. As an example, family members or friends usually share a strong tie, whereas acquaintances have a weak tie.

We can group alliances into four main groups, however, it’s likely that an entrepreneur will make use of a combination of these to meet his or her strategic objectives.

Economic alliances share cost and risk among all involved parties. By pooling resources they can reduce and diversify risk to everyone’s benefit, while taking advantage of the resultant economies of scale and co-specialisation. An example would be the Google and Luxottica alliance.

Google has become synonymous with innovative technologies and the same can be said about Luxottica and fashion. This partnership was built on co-specialising in the production of an attractive pair of Google glasses that can be purchased purely for appearance sake, thereby providing Luxottica brands with the ability to showcase its techno-savviness and charge a premium price for its products.

This type of alliance is entered into specifically for one or both parties to gain knowledge and skills so as to address and improve operational areas of the business, such as, distribution, performance and management. For example, in the Apple and IBM collaboration, IBM was able to leverage off Apple’s hardware and software integration, and Apple was able to take advantage of IBM’s big data analytics, industry sales consultants and software developers to help Apple penetrate the global corporate enterprise market.

These alliances offer a number of advantages, including the ability to expand into new businesses, gain access to new technology, benefit from research and development, and reduce competitive risk. The Spotify and Uber partnership created exclusivity for Uber, by allowing them to provide their customers with their own playlists every time they got into an Uber vehicle. It presented added incentives to Spotify users to upgrade to the premium level, and differentiated Spotify’s products from those of other mainstream streaming companies.

Political alliances allow for the bypassing of legal and regulatory barriers and the development of market or technical standards. The Volvo and Dongfeng Motor Group alliance made Volvo the world’s largest heavy-duty truck manufacturer, and it also assisted it to take advantage of Dongfeng’s access to the Chinese market. This allowed Volvo to circumvent political and legal barriers that could probably have delayed operations for months or even years.

Forging an alliance is a key strategy to consider for any business or entrepreneur that aspires to be bigger and better. And social media has become an acceptable way to meet and communicate with people. Therefore, it would make sense for social media to be a major contributor to alliance-creation. But it doesn’t seem to be working out that way.

There are several possible factors that could be influencing this, the first of which is trust. Entrepreneurs tend to favour using social media to maintain weak ties, rather than to create them. In other words, they’ll use social media to keep in touch with someone they’ve already met elsewhere, rather than to meet people. The reason for this could be that people are understandably hesitant to trust someone they’ve met on social media, recognising that their ability to really ‘know’ them is limited.

Another influencing factor is education. People are generally just not adequately informed about social media best practices and its enormous potential (both positive and negative) to shape their fledgling business.

Educational institutions (schools, universities and colleges) could undertake this task for both students and adults, but the logical choice to provide this service would be the social media platforms themselves. They’re obviously familiar with the best practices for their platforms, they’re in the unique position of being able to access all of the users on their sites easily and, most importantly, their incentive would be the expansion of their user base, through acquisition of new online entrepreneurs as well as their customers.