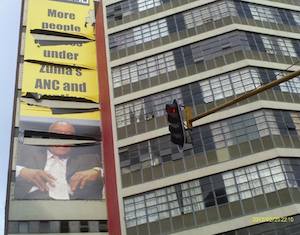 It’s election time again – just in case the plethora of placards and billboards plastering the city had escaped your notice. And not only are election posters on the streets, they are also in the news – exactly where we should expect them.

In January, the Democratic Alliance attracted the ire of the ANC with a billboard installed in downtown Johannesburg. This featured a live ticker, allegedly monitoring the number of ‘people jobless under Zuma’s ANC and counting’, which spawned a host of media coverage before being vandalised a few weeks later.

A similar fate met the ‘Zuma Must Fall’ billboard that had social media twittering wildly in the same month (according to ROi Africa, social media charts were dominated by #ZumaMustFall as the largest story for January, by over 50%).

More recently, commentators noted the omission of the president’s face from many of the ANC’s election registration posters – and wondered if this indicated a lack of confidence in the president’s voter appeal (or perhaps even uncertainty around his continuing presidency come election time).

This prompted the ANC to respond that posters adorned with Zuma’s face were heading out for distribution following April’s manifesto launch.

Ian von Memerty wrote a critique in the Daily Maverick comparing the “register to vote” posters of the ANC, DA, and EFF – declaring Julius Malema “the best poster boy for the 2016 elections”, the ANC’s poster “insightful” and the DA’s offering “amateurish”.

And most recently, the DA once again annoyed the ANC with their Nelson Mandela Bay billboard, which sports ANC colours and declares ‘Danny Jordaan proudly brought to you by Jacob Zuma’. More legal skirmishes, more controversy and more headlines loom.

All of which illustrates one of the key roles of posters and billboards during elections: to score earned media, as recently noted by ‘political advertising obsessive’ Benedict Pringle, in his blog ‘Commentary on political advertising; from Amnesty to Zanu-PF’.

“The primary objective of political billboards in recent times has been to drive the news agenda,” he says.

“Outdoor advertising is simply the most impactful media platform available to a political party. The sheer scale of a 96-sheet poster, the incredible numbers of people who can be reached at targeted locations and the media notoriety that results from a really provoking piece of outdoor advertising means that… we’ll be seeing the political billboard in elections for many years to come.”

In South Africa, this ‘battle of the billboards’ as a bid to gain media attention is arguably nowhere near the level it has reached in Britain, where political posters are an art in themselves. (In fact, some people have gone so far as to say that a campaign poster – “Labour isn’t working”, from 1979 – was responsible for the Conservatives winning the British election that year). Nevertheless, there’s plenty of reason to expect more controversial billboards to hit the news locally in future. 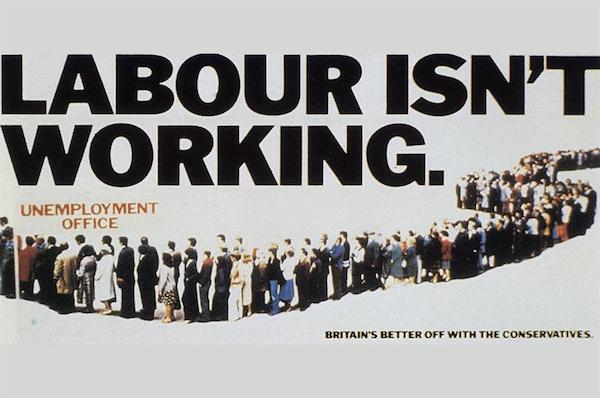