SABC censors the flight of the Guptas 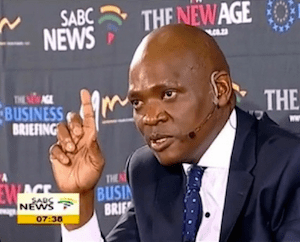 At 20h00 on Sunday I typed the word ‘Gupta’ into the search bar of the SABC website and the most recent article about Gupta on a website which, with no sense of irony, refers to ‘breaking news’, was a six-day old article , ‘Corporate South Africa turns its back on Gupta owned company’.

On Monday, there was a brief mention of the Guptas in a report on SACP leader Blade Nzimande’s speech at the memorial for Chris Hani.

That’s not the worst of it – the worst is that the best-resourced news organisation in the country, which allegedly has an ‘Economics Desk’, sourced the above-mentioned article from Reuters!

The reason for this censorship by omission is not hard to find. At a Gupta/ANC/SABC breakfast on 6 April Hlaudi Motsoeneng stated that he would not allow the word ‘capture’ to be used on the state broadcaster’s news bulletins and issued a specific instruction in this regard.

He said: “People need to appreciate the role of the ruling party. And I’m not representing the ruling party but I take offense when someone criticise (sic) people who fought, including some of the liberations (sic) movement, PAC and others, they fought for this country.”

“I don’t want to sit here where people are criticising the democratical (sic) people who are elected. And actually we should leave politicians to debate in parliament”.

You cringe, wince, grimace and writhe in embarrassment but no more so than when the man who, according to noseweek, is counselled by Motsoeneng’s father on “spiritual and ancestral matters” tells South Africans that our judicial system cannot be trusted.

Brace yourself for a protracted ‘Stalingrad’ legal battle, fought at your expense and mine, to keep the man who ‘Baba loves’ in his position of influence for as long as possible or, at the very least, until after the 3 August municipal election.

There is work to do and Motsoeneng will be expected to equal or exceed his stellar 2014 record of banning pre-election television advertisements by opposition parties.

In October last year, one of Motsoeneng’s lawyers, Norman Arendse, told the Cape High Court that Thuli Madonsela’s report on Motsoeneng, ‘When Ethics and Governance Fail’ was flawed – as flawed one must assume as was her ‘Secure in Comfort’ report on Nkandla.

Another of Motsoeneng’s lawyers, Zola Majavu, stated after the Constitutional Court ruling on Nkandla that it had no bearing on Motsoeneng because he had complied with the Public Protector’s findings. “This action had required the SABC to hold a disciplinary committee hearing into the findings. This was done,” he said.

However, in a truly remarkable lapse of memory he seems to have forgotten this part of her ‘When Ethics and Governance Fail’ report, which found that Motsoeneng should never have been appointed in the first place: In that report she stipulated that the financial losses sustained because of Motsoeneng’s conduct, be recovered from him.

She cites 14 such examples which she said constituted ‘improper conduct, abuse of power and maladministration’ which unnecessarily cost the SABC R29 million in ‘avoidable legal fees, settlement awards and acting allowances for persons in suspension.’

That Majavu should rely on what is widely perceived to have been a brazenly rigged disciplinary hearing is troubling.

It thus comes as no surprise to read that Oupa Segalwe, spokesman for Madonsela, said that she would take the matter further as it was quite clear that the SABC had “misunderstood” the situation.

In its Nkandla judgement, the Constitutional Court’s concurring 11 judges found that President Jacob Zuma must be held ‘personally’ liable for the non-security upgrades at Nkandla. That means, I would suggest, that Hlaudi Motsoeneng should be trying to raise the R29 million in “avoidable legal fees, settlement awards and acting allowances for persons in suspension” that were the avoidable consequence of his nefarious activities.

Perhaps the Guptas, in their bountiful munificence, could pick up the tab given that they have made shedloads of money out of their Gutpta/SABC/ANC propaganda breakfasts. They could, for example, siphon off a portion of the R43 million which Eskom so kindly donated at a time when the economy was being crippled by rolling power cuts.

Majavu told the Gupta newspaper, The New Age that: “We will appeal and appeal until we exhaust all possible remedies available.”

And why not, it is after all only taxpayer’s money and Motsoeneng is one of those people anointed by our shepherd who, as he told some 10 000 followers in Melmoth, is more than willing to lead us.