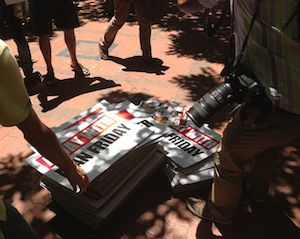 The smoke rises from the burning tires, calling the television cameras, the reporters and the decision-makers to the scene. It galvanises the powerful to pay attention to communities that have long been marginalised by society.

It is a critical factor in whether or not communities feel their voices are being heard. But, it also perpetuates the ongoing belief that communities are only heard when there is violence.

The decision by the SABC not to screen scenes of violence brings this dichotomy to the fore and highlights the critical role the media plays. In opting to turn a blind eye to the consequences of social injustice, the question remains whether media plays its proper role in highlighting community concerns.

The violence of protests is the smoke that calls, but we should review how communities are marginalised or muted so that violence does not become the only option to be heard.

Research conducted by CSVR and SWOP in 2011, The Smoke that Calls, highlighted that communities use violence as a way of calling out authorities, as violence is considered to be the message understood by government.

CSVR’s research found that communities resorted to violence as “the only language” that would be heard by government only after years of peaceful protests and trying to get the leadership to hear them.

Should we ignore the smoke that calls as SABC is opting to do? To do so would ignore that there are real underlying issues that need to be dealt with. Instead of turning away from the smoke, we need the media to play an active role in social transformation by seeking out the underlying issues that inform the violence. We should rather seek to prevent violence by acknowledging people’s concerns before the need for violence arises.

Communities resort to violence because they want to be heard, and presently such voices are too easily ignored when communities follow conventional channels.

The media has been a voice for the poor since the anti-apartheid era. They must not now seek to silence people’s voices. Without the SABC’s footage of what happened to teacher Andries Tatane during water protests in Ficksburg, South Africans would not have understood the community’s struggle; without coverage of the Marikana Massacre, we would not have understood the gravity of the situation.

The media, especially SABC, is supposed to be the voice for the poor. By banning footage of that anger, the SABC is taking away a much-needed platform. It points to the country’s denial and unwillingness to face the realities of those who feel disenfranchised in our society face.

Our struggle is not merely for accurate reporting. It is for broader social justice.

At the core of nationwide protests is a need to be heard. Our government, our privileged sector, our decision-makers, need to hear and see society as it is, with the harsh realities faced by ordinary South Africans when it comes to socioeconomic struggles.

Our research has highlighted a lack of leadership – including delayed leadership response and inappropriate responses – as among the factors that accelerate or decelerate collective violence during protests.

Research in the communities highlighted that leadership tended to respond only when there was violence. And this response was often one that was dismissive or confrontational, often triggered more violence.

There is an urgent need to train leadership on crowd communication skills that decelerates rather than accelerates violence. Leaders also need training on how to deal with the “emotional triggers” of crowds and how they could avoid aggravating volatile situations. Leadership in this instance includes not only government in media and civil society.

It is important that we do not only hear when there is violence but also when there is a peaceful expression of concern. The media cannot turn a blind eye. But most importantly, it needs to be present even when the smoke does not call.

Nomfundo Mogapi is the executive director for the Centre for the Study of Violence and Reconciliation.