Only 12 more sleeps and Hlaudi’s SABC will celebrate success 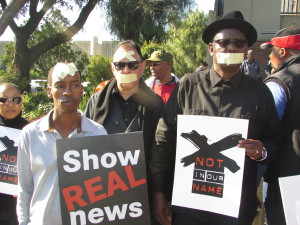 OPINION: So the SABC, in theory, rolled over this week in light of various challenges to the Motsoeneng censorship diktat.

The Pretoria High Court, in a case brought by the Helen Suzman Foundation, interdicted the public broadcaster from enacting Hlaudi’s ban on flighting images of violent protests. Then, in what seemed like indecent haste, the SABC capitulated to Icasa, which had also ruled Hlaudi’s crazy censorship ploys had to be withdrawn and the broadcaster do its duty by reporting the news honestly and fairly. Hmm.

Let’s not get complacent here. This is no mea culpa. This is just a regrouping because in spite of the High Court Interdict against the SABC yesterday, my guess is it will continue to doggedly dig in its heels over the issue of news censorship by “examining the judgement” and “conferring with our legal team” for the next couple of weeks.

The broadcaster’s beleaguered spin doctor, Kaizer Kganyago, his head spinning from trying to keep up with all the issues facing the SABC, said as much. As the SABC reported on its news website, Kaizer pointed out that the interdict was temporary, in force only until the Constitutional Court rules on the matter. Countdown to the anticipated obfuscation, three, two, one…  “From this stage, we are going to then go back to our lawyers to take this matter forward in terms of the order that has been put. Because it’s now an interim order and then we will interpret it further with our lawyers.”

By then the municipal elections will be over and this phase of the SABC’s censorship aspirations will done and dusted.

Because more than 60% of the voting population in South Africa have only one source of news – the SABC, Hlaudi’s ‘hullabaloo’ will have been effective. Those viewers and listeners will have been prevented from seeing or  hearing about what has really been going on in this country.

The former public broadcaster and now presidential praise singer has turned obfuscation into an art form and abused Lady Justice so badly she has run away and hidden in a cupboard.

The entire SABC scenario over the past few months has been like the script of a spoof movie in which the main character is hell-bent on winning the ‘Dictatorial Despot of The Century’ award.

Since the darkest days of apartheid, when the SABC became the mouthpiece for PW Botha, has the national broadcorping castration been so blatantly abused?

And now, in only 12 days time, if the SABC board and its management hatchet men can keep up their delaying tactics, it will be able to celebrate success.

It would have kept any anti-Zuma and anti-ANC news from its viewers and listeners, who will go to the polls in the first week of August thinking that everything is just wonderful in sunny SA under ANC management.

And all those protests from ANC bigwigs against SABC censorship are probably just part of the plan. There are going to be scapegoats somewhere, that’s for sure. But they will probably get plush ambassadorships somewhere for their service to his master’s voice.

Small wonder all the president’s men and women in the SABC have been behaving in the way they have in a desperate bid to garner as many votes for the ANC as possible.

I would not be at all surprised if, after the August municipal elections, the SABC suddenly decides to lift its censorship and bring things back to their normal run of the mill propaganda instead of the turbo-driven stuff we have been experiencing over the past month.