Posted By: The Conversationon: August 23, 2016In: Broadcasting, Television
Print Email 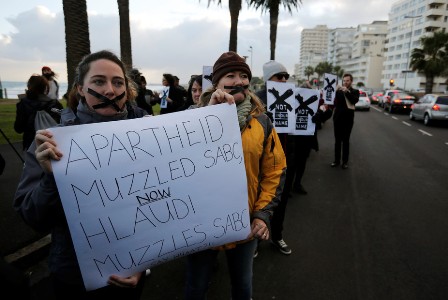 Protesters decry the decision by the South African Broadcasting Corporation not to air scenes of violent protest.


The problems at South Africa’s public broadcaster have become legendary in the country. These range from serious mismanagement, to loss of editorial independence and poor financial management.

The problem is particularly serious because the South African Broadcasting Corporation (SABC) remains the only source of information for most South Africans. But fixing the problem isn’t easy. This is because the country’s parliament, which has oversight, has been unable to impose its authority on decisions made by the SABC’s board, or on the minister in charge.

As a result the SABC has stumbled from one crisis to another. Its financial situation has become more precarious every year and its ability to fulfil its mandate more tenuous.

There were high hopes that the SABC would become a true public broadcaster after the end of apartheid – an era when it was used ruthlessly as a propaganda machine. But after a promising start, with concerted efforts to turn the SABC into a true public broadcaster (that included a democratically elected board and strong public service orientated editorial policies) it soon became clear that there was ongoing interference from the governing African National Congress (ANC). A glaring example included the blacklisting in 2006 of commentators critical of then president Thabo Mbeki.

The South African Parliament has a dismal track record of sorting out the SABC’s problems. This goes back years.

But parliament’s portfolio committee has fallen victim to internal battles within the ANC and has simply not performed. It has routinely abandoned its oversight role.

The hard questions that members of parliament have failed to ask range from issues of editorial integrity through to questions on finances, particularly linked to financial mismanagement.

The SABC is financed through a combination of advertising (about 80%) licence fees (about 18%) and government (2%). It differs from public broadcasters in other countries because it relies heavily on advertising. Generally they rely on approximately 60% public funding.

The first set of hard questions MPs ought to have asked is around the SABC abandoning its editorial principles. For example, why did management issue the clearly illegal policy directive to ban footage of violent protests, particularly during an election period? A number of violent service delivery protests broke out in the run-up to local government elections in August. The SABC claimed that showing footage of protests would encourage further violence.

Management should have been asked why it initially defied a ruling by the broadcast regulator that its ban was illegal. The SABC initially played for time, saying it would take the matter on review. It eventually said it would comply.

Finally, management should have been asked why it went ahead and illegally fired journalists for defying the ban.

There is every indication that the broadcaster’s management is still bent on continuing to show the government – and particularly President Jacob Zuma – in a good light. Management recently passed a set of editorial policies that make its intentions clear.

A planned portfolio committee meeting in August 2016 gives MPs a chance to ask these and additional questions.

For instance, they should ask why under the new policies the role of editor-in-chief has shifted from the chief executive to the chief operating officer, Hlaudi Motsoeneng. Motsoeneng is a highly controversial figure. He is accused of lying about his qualifications, raising his own salary illegally and pushing for the SABC to play a propaganda role by, for example, calling for 70% “good news”.

Finally, MPs need to ask some pointed questions about why the SABC has abandoned an open and transparent system of commissioning programmes that relied on “request for proposals”. Instead it has opted for a secretive process that centres on Motsoeneng. It allows select producers to approach him directly, creating fertile ground for dodgy deals and corruption.

The second set of hard questions concerns the SABC’s finances. The broadcaster appears to have hit a cash flow problem and requires a major financial bail-out to continue operating.

Motsoeneng and the new acting CEO James Aguma have approached commercial banks for a R1.5bn loan to plug a current expenditure shortfall. Without additional borrowing it could soon be unable to pay suppliers and salaries.

The key source of these problems appears to be financial mismanagement.

Other reasons include ballooning staff and consultant costs, fruitless and wasteful expenditure on legal fees and golden handshakes to staff.

The most recent allegation of mismanagement involves the awarding of a contract to collect unpaid licence fees. Non-pensioner adults are expected to pay an annual fee of R265. The contract was allegedly awarded to a politically connected company without going out to tender.

Finally, Aguma reportedly plans to pay Motsoeneng a bonus for a questionable deal he signed with MultiChoice, the subscription television service, in 2013.

In terms of the deal, it was agreed that the SABC would supply MultiChoice’s DSTV platform with a 24 hour news channel, an entertainment channel and access to the SABC’s archives. MultiChoice was to pay R570m for a five year contract.

Industry insiders have argued that the SABC was hugely underpaid. Civil society organisations have instituted legal action against the SABC, arguing that selling off its archives is equivalent to selling off the family silver.

Parliament needs to ask these hard questions and ensure rigorous follow-up on all the promises the broadcaster makes.