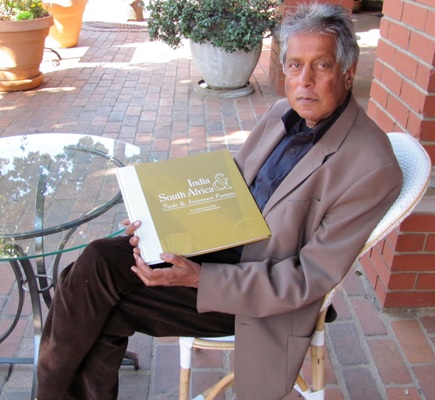 
CYBERTORIAL* Commissioned by the Consulate General of India, Wag the Dog recently published India and South Africa: Trade and Investment Partners, which introduces many of the Indian companies currently active in South Africa. The book was presented to a business delegation at the CEOs’ Forum meeting on 8th July 2016 during the visit of His Excellency Narendra Modi, the Prime Minister of India to South Africa.

Supported by the Government of India through the Investment and Trade Promotion Division of the Ministry of External Affairs, India and South Africa: Trade and Investment Partners features some 75 companies. These have been selected to represent a wide range of commercial collaborations between the two countries, which range across the full spectrum of enterprise from banking, automotive and pharmaceutical, to mining and engineering. The result is an attractive coffee table book demonstrating the many fruitful partnerships between South Africa and India, whose commercial relationship is clearly one to be valued and nurtured.

Edited by Professor Govin Reddy, with Abdullah Verachia as contributing editor, the book was created and produced by the Wag the Dog team in a remarkably short period of time. “It gave me enormous professional satisfaction to edit the book, India and South Africa: Trade & Investment Partners, which contributed to the success of the Indian Government’s recent business delegation to South Africa”, says Reddy. “The huge volume of trade and investment between the two nations was well covered by a team of excellent writers, and the design and production quality make this stand out as a top coffee table book which is sure to be referenced often.”

“The book is amazing’’ says Verachia. “Well done to the team – a real feat considering timing.”

According to Sandra Gordon, CEO of Wag the Dog, “This project has been under consideration for a number of years, and we are pleased to have been able to finally bring it to fruition.  We are very happy with the result, and look forward to similarly showcasing South Africa’s relationships with further valued partners in the future”.