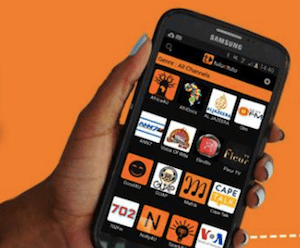 Mary Meeker is a partner at VC firm Kleiner Perkins, Caufield & Beyers (KPCB) who authors arguably the most widely anticipated annual internet trends report. It focuses on the giant markets of the US, Asia and Europe, but the astute observer can pick African trends that are either already established or are likely to be underway but not readily visible. Meeker is seldom wrong, as her content is overwhelmingly data driven. As the old adage goes, the data doesn’t lie.

1. The global adoption of smartphones is slowing, yet growth is still robust in developing markets. Watch closely as Africa and LatAm are poised to boom similar to how Asia has for the last 7-8 years, particularly as the average cost per unit declines. 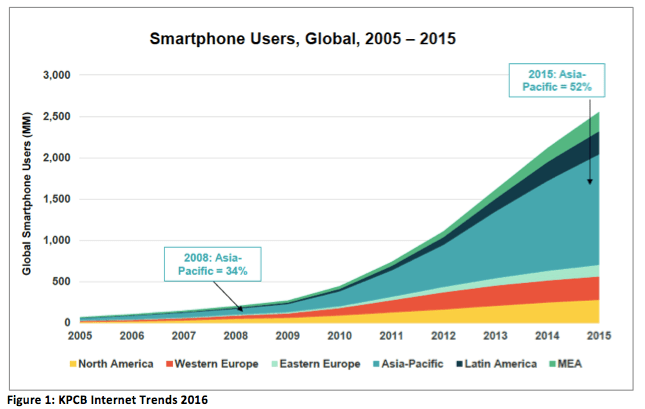 2. Screen time is now dominated by smartphones. Nigerians, Kenyans and South Africans spent more time viewing content on smartphones than on any other screen based device. Expect this ratio to rise rapidly as (i) content apps and platforms proliferate, (ii) the cost of devices and data falls rapidly, and (iii) smartphones penetrate market segments that don’t have other screens in the home. 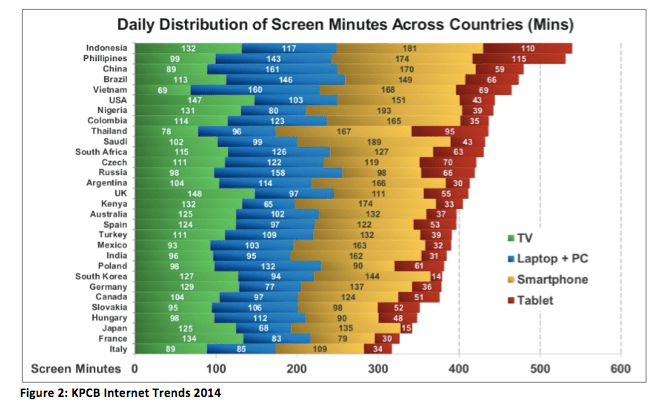 3. Meanwhile, in developed markets, linear broadcast media is morphing into on-demand apps as “vertical viewing” rises dramatically. Much of this is driven by social and messaging, but in developing markets the smartphone is already the primary content device. 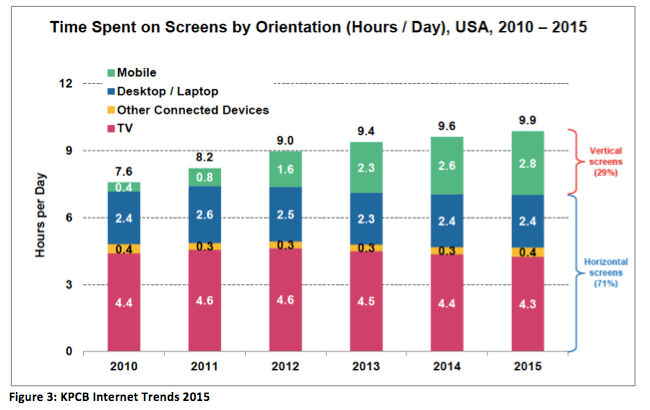 4. Video is the content queen: In developed markets the ubiquity of devices and high-speed networks, plus declining costs of memory, storage and computing power clearly indicate a different, user-driven media landscape. Almost all large social platforms have/are migrating to video led content. Average total Facebook link shares dipped below 30, image shares declined below 150 while video shares averaged between 500 and 600 (Jan to Jun 2016, source Buzzsumo). This is the primary reason Facebook has again rejigged its algorithms to favour video. Snapchat’s meteoric rise is yet another indicator. 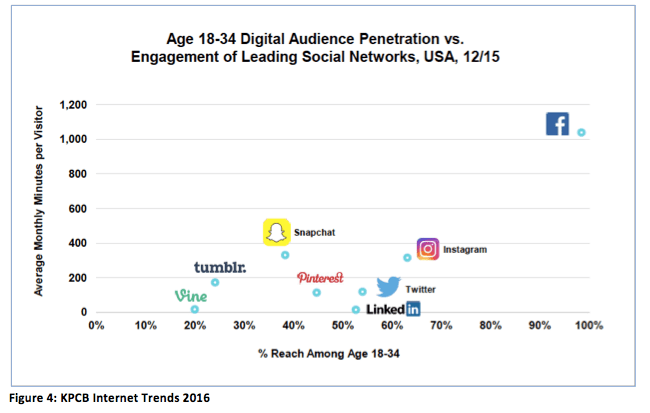 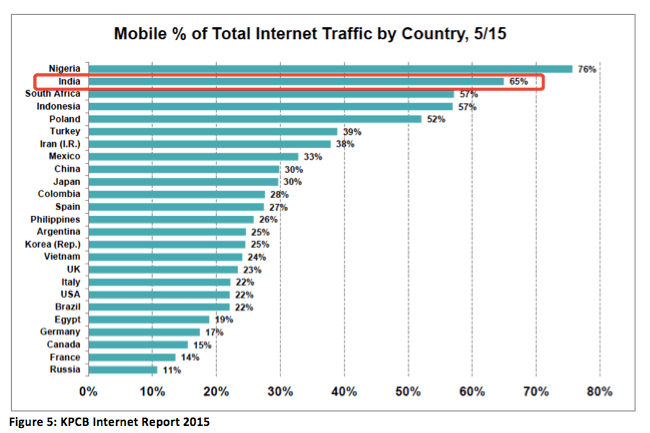 A few years back Meeker coined the “internet trifecta” as the critical mass of content + community + commerce. It’s Holy Grail territory where theoretically just about anyone can play. It’s Facebook’s nirvana, possibly Amazon’s and Google’s too. iTunes is arguably there. Reality demands that another model is required, a very different one to the legacy producers, distributors and publishers of yore.

While Silicon Valley and Zhong Guan Cun battle it out, is there anyone capable of making this a reality in Africa? Traditional information, communications and telecoms are governed by territory, which are government controlled requiring complex licensing and distribution arrangements. This makes the cost of content inaccessible to many.

DStv has decent penetration across many African markets, owing primarily to live sports (football) content, but it struggles to monetise other channels meaningfully outside of SA. Netflix will be pushing water uphill for years as it imports Western content in return for an increasingly expensive dollar based subscription over thinly distributed high capacity networks. With these barriers blocking progress, it’s doomed in my opinion. That’s already been proven in SA with the failure of TMG’s VIDI and Altech’s NODE, and the jury is a very long way from deliberations on MTN’s VU and Netflix.

Naspers is probably best positioned to migrate DStv subscribers to ShowMax as the former model unravels, but it won’t emerge with the dominance gifted them by the old Nationalist government. Foreign-based content distributors are unlikely to tap Africa’s potential, a heterogeneous collective of hundreds of disparate languages and cultures hungry for quality local content. The market is enormous.

Forget apps and channels, platforms are key to unlocking the trifecta

Three years ago radio and TV personality Gareth Cliff launched CliffCentral.com, SA’s first non-linear IP ‘broadcast’ platform. Unfettered by regulators, territorial limitations and the BCCSA, CliffCentral launched SA’s first home-grown digital age media model. Cliff and business partner Rina Broomberg knew they were onto the right model, the only variable was sufficient capital to sustain them through the dark passages of advertiser enlightenment. CliffCentral is still in its early life stages but it could yet disrupt the radio industry. As Nevo Hadas of &Innovation wrote, “At its core, digital disruption is caused by the resetting of price due to a change in distribution models as the customer’s point of purchase evolves.”

Which brings me to Tuluntulu, a little known platform that is poised to pave the way to a disruptive African-led media model.

Technology is enabling platforms to become the new distributors and to reset the pricing model, of which the free model is best. Tuluntulu is one such platform I’ve been watching with interest, and one deserving of a great deal more attention from media and advertisers. In a nutshell it’s a smartphone app streaming a broad variety of TV and radio content across the African continent. Key is that while it adopts the form of an app it’s actually a platform aggregator where users pick and choose content. For years market commentators (me included) scoffed at the notion of long form video on a handheld device. The obvious hurdles of screen real estate, signal quality, bandwidth and cost of data just stacked the odds ridiculously high. But those tipping points have all been reached and the platform is ready to explode.

The content is a diverse mix of local, regional and some international. Tuluntulu currently carries 26 x 24/7 TV channels and 20 radio stations broadcasting in English, French, Hausa, Portuguese, and Kiswahili. The TV genres include Entertainment, News (including Al Jazeera), Education, Documentaries, Movies, Series, Sport, eSports, Fashion, Lifestyle, Children, Comedy, Music, Shopping, Public information, Religion and French. Channels are being added all the time, and there is literally no limit to the variety and scope of content the platform can carry.

The app displays the channels’ Twitter feed providing live user/channel interaction (second screen). The user can personalise the app by selecting favourite channels, and users can choose high or low profiles in order to save data costs or increase picture quality. Users can register directly or via Facebook, which will provide push marketing options in order to drive user engagement. Items can be shared via social media.

The app is free to download from the App Store and Google Play. Content is free to subscribers, placing it at a distinct advantage over subscription models. The only cost is streaming over GSM, and this is where the data barrier once reared its head. Except that Tuluntulu deploys a unique compression technology that burns as little as 50 MB per hour for video. To contextualise, that’s approximately R3.00 for a 90 minute movie on an average 2GB SA GSM mobile package. On the new Telkom Mobile FreeMe 2GB package one can watch 41 hours of streaming video. That’s insanely cheap, even by SA’s high data cost standards. And of course it’s free on wifi (unless of course you’re paying for the wifi).

Tuluntulu is proving to be popular across Africa – the app has been downloaded over 460 000 times in 154 countries, the most popular being South Africa, Nigeria, Ghana, Tanzania and Kenya. The cumulative usage numbers since launch include over 15 million screen views from more than three million sessions. The app has an astonishing 90% sticky rate, meaning 9/10 users return for more. The most popular channel is, somewhat surprisingly, Nollywood feature films. That’s a testament to the small screen assuming prime position in consumers’ lives.

This is the most exciting part as there are a multitude of monetisation options – which is especially important for advertisers and content creators. Advertisers can reach audiences with long form programming, short form advertising, sponsorship or digital messaging. Tuluntulu has a large database of users across Africa that can also be accessed for surveys. Very importantly, the platform offers a fantastic distribution opportunity for the vast quantity of video content that either can’t find a home or is lost dribbled across a multitude of social channels and individual apps.

Content owners wishing to extend the reach of existing programming into the mobile space can secure a dedicated, branded 24/7 channel. Tuluntulu can assist with monetising these channels via the sale of advertising or content slots. Corporate customers can secure their very own TV channels at low cost. Communities (e.g. professional bodies) can have dedicated channels running their own content.

The bottom of the pyramid segment is an obvious target as they have the least access to content outside of government radio and television. The killer component is mobility – Tuluntulu turns a smartphone into a holistic mobile media device. Now curated content has a ready-made platform capable of addressing this segment with the added advantage of full digital measurement.

But don’t mistake this as only a platform for reaching the poor. With variable compression options, the platform can carry high quality video beamed to a flat screen TV via Chromecast. This makes it the perfect platform for any content distributor wanting to reach any market segment across any territory. It also makes it the most complete media distributor unrestricted by borders, regulators and governments. Spend five minutes thinking about how impactful this platform could be outside of news, entertainment and sport. Think education, healthcare, training, agriculture, safety and security, transport, social development – the possibilities really are endless.

Tuluntulu has received a number of local awards including a Frost & Sullivan Customer Value Leadership Award VOD 2015, Technology Top 100 Innovation award 2015, Best African App AppsAfrica award 2015, and was a finalist in the MTN App of the Year Awards 2015. In 2015, Tuluntulu received global recognition when selected by Unilever Foundry 50 as one of the top 50 startups in the world, and by Interbrand as a global ‘Breakthrough Brand’ in 2016.

Perhaps the most significant aspect of Tuluntulu’s platform is the return path capability enabling the convergence of TV and internet on a mobile device that delivers Meeker’s trifecta ideal. The ability to consume content, react to commercial messages and seamlessly transact is the big step to true digital integration. Context, relevance and timing are vital to call-to-action, while convergence is vital to seamless instant response. This is the sweet spot that advertisers would be well advised to experiment with and content purveyors would be well advised to investigate. The trove of data providing instant feedback, market intelligence and sales analytics is way beyond the means of anything marketers can currently achieve outside of their own ecosystems.