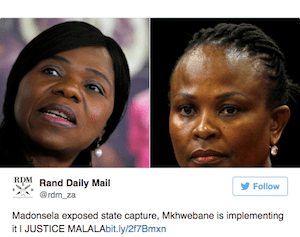 Jacob Zuma, Des van Rooyen and Mozebenzi Zwane go to court today to fight the release of former Public Protector Thuli Madonsela’s report on #StateCapture. Here, a researcher analyses the data around the Public Protectors, past and present.

In this post I’m going to look at 180 000+ tweets mentioning the Public Protector. The dataset includes mentions of the Public Protector’s office in general as well as specific mentions of Thuli Madonsela or the various candidates for her replacement, including her eventual successor, Busisiwe Mkhwebane. The data covers more than two months, running from the 16 August up until the 25 October 2016.

For readers unfamiliar with South African politics, the Public Protector is an independent institution tasked with investigating misconduct within any sphere of government. As such, the Public Protector is uniquely positioned to safeguard the South African public from abuse by those in power. For the past seven years, Thuli Madonsela has been our Public Protector. During her tenure, Madonsela demonstrated unusual bravery and dedication to her role by standing firm in her investigations into misconduct that reached right up to the highest tiers of government in the form of Jacob Zuma (who has over 700 counts of fraud, corruption and money laundering hanging over his head).

Madonsela did such a good job that she was even named one of the world’s top five most ‘extraordinary women’ on a recent global list, among many other awards and recognitions.

In a Shakespearean twist of fate, Madonsela’s term came to an end in October 2016 just days before she was able to release her final report into ‘state capture’ by president Zuma and his business pals, the Gupta family.

In a Shakespearean twist of fate, Madonsela’s term came to an end in October 2016 just days before she was able to release her final report into ‘state capture’ by Zuma, some of his loyal ministers and his business pals, the Gupta family. Many believe that this report will be the final nail in president Zuma’s political coffin, with its contents assured to force him out of office. During her time as the Public Protector, Madonsela stood as a beacon of hope for many South Africans in the face of the relentless onslaught that our country’s institutions have had to endure by those in power for their personal gain. It remains to be seen whether her successor Mkhwebane can live up to the same high standard. Already, warning signs have appeared that make many worry that Mkhwebane has been ‘captured’ by the president and his collaborators (see this article by The Sowetan for a summary of some of those warning signs).

There is a single community that is conspicuous in its contrarian view of Madonsela and the topic of ‘state capture’ in general.

Few readers will be surprised to read that the vast majority of South Africans have only glowing praise for Madonsela and the brave work she did standing firm in her position as the public guardian. There is one exception to this general praise however. There is a single community that is conspicuous in its contrarian view of Madonsela and the topic of ‘state capture’ in general. This community is centred around Andile Mgnxitama’s Black First Land First (BLF) party and the Gupta-owner media properties, ANN7 (a satellite television news channel) and The New Age (their flagship newspaper).

This lone community stands in isolation from the rest of South African Twitter when it comes to the narrative that they espouse around the Public Protector (see my previous posts here and here about the weird, synergistic relationship between the BLF and the Gupta media). We’ll shortly get into their view of Madonsela and her successor, Mkhwebane, but let’s first take a step back and return to the data…

Let’s start as usual with the network of conversations that we can derive from the 180 000+ tweets in our dataset. To create this network, we connect users together whenever they interact by retweeting or @mentioning each other. We then run a community detection algorithm on the resultant network to find the distinct groups of people talking more to each other than to other groups. As the saying goes, ‘birds of a feather flock together’.

Thus, each of these groups is generally a community of like-minded individuals with its own shared influencers and agenda. We can get an idea of what they care about and believe by seeing who the influencers are that they listen to and what content resonates the most with them. Taking a look at the network below, we see that seven communities stand out in particular. In the interest of privacy, I haven’t included any specific usernames in the below network. Instead, I’ve just included a label for each overall community. 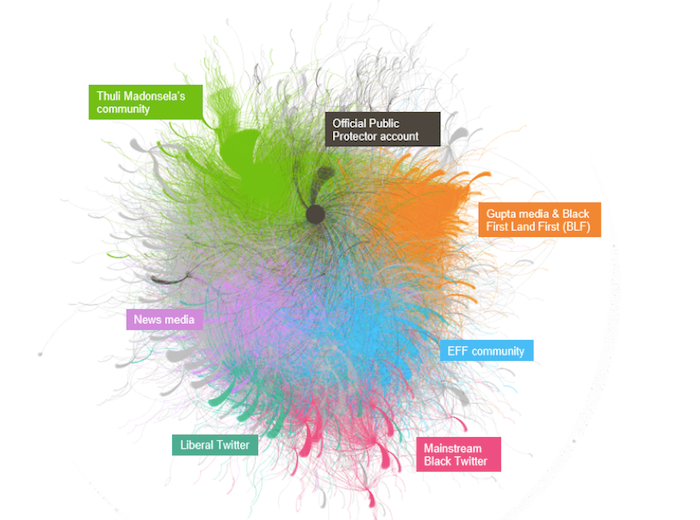 The communities pretty much cover the entire South African political spectrum. Thuli Madonsela has done a great job of creating her own community of followers (see the green community above). We also have liberals, woke and socialist-leaning communities represented. The standout community for me though is the one in orange. This community is made up of followers and supporters of the Black First Land First (BLF) party which is a radical party whose leader, Andile Mngxitama, just so happens to also have close ties with the Gupta-owned television station, ANN7 (Mngxitama is a talking head for the station). Considering that the Gupta family sits at the eye of the state capture storm due to their close links with president Zuma, it is unsurprising that the Gupta-media properties push a pro-Zuma, pro-Gupta narrative, which the BLF further amplify under the guise of strident rhetoric aimed primarily at ‘white capital’.

…the Gupta-media properties push a pro-Zuma, pro-Gupta narrative, which the BLF further amplify under the guise of strident rhetoric aimed primarily at ‘white capital’.

This is the most prominent that I’ve seen the BLF in a dataset, which took me by surprise. However, on further reflection, the party’s messaging focuses primarily on undermining Zuma’s enemies and so the party is likely to show up in any dataset covering Madonsela or finance minister, Pravin Gordhan. Even so, I was surprised by their prominence which seems to indicate that the synergy between themselves and the Gupta-owned ANN7 and The New Age is working to create a community around a pro-Zuma (and anti-white capital) narrative (parallels with Putin’s Russian propaganda machinery as described in this VICE News documentary easily come to mind – if you can’t control the news, make your own). 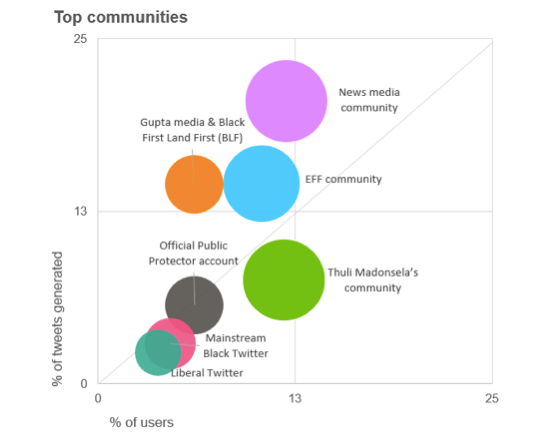 Okay, so we’ve just isolated the main constituencies talking about the Public Protector. Let’s take a look at what they are actually saying. In the interest of space, I’m just going to include the most-retweeted tweet containing sentiment about former Public Protector and perennial thorn in president Zuma’s side, Thuli Madonsela, and the newly installed Public Protector, Busisiwe Mkhwebane.

Note that I’ve not included tweets from Thuli Madonsela’s community and the Official Public Protector account community since the most-retweeted tweets in these communities came from Madonsela herself or the Public Protector’s official account respectively, and thus don’t really apply in this analysis.

These then were the most-retweeted tweets containing sentiment about Madonsela and Mkhwebane within the News media community:

Hey hey hey it's #ThuliMadonselaDay. Thank-you @ThuliMadonsela3 for being the best and coolest Public Protector ever. ?????????

This was the EFF community’s most popular sentiment to each Public Protector:

Farewell @PublicProtector Adv. T Madonsela. We want to be like you when we grow up & never sacrifice principle on the altar of convenience. pic.twitter.com/8SRQKfKGCM

Mainstream Black Twitter had the following things to say about each Public Protector:

The kind of news I live to hear @ThuliMadonsela3 mama I love your work!!! pic.twitter.com/096wdcB3ag

And this is what Liberal Twitter had to say about Madonsela and Mkhwebane, respectively:

Thuli Madonsela has undoubtedly been the best thing to South Africa since Nelson Mandela. Period. ✊?#StateCapture

Malema' ''We will investigate Advocate Busisiwe Mkhwebane if she is spook''

While each of the above communities said it in their own way, they all demonstrated consistency in their praise for Madonsela and skepticism for Mkhwebane. Contrast the above sentiment to the most-retweeted tweets in the BLF-Gupta community:

@PublicProtector Thuli
Madonsela leaves behind a R750 000 debt owed to G-Fleet for repairs to a state vehicle crashed by her son in 2012. pic.twitter.com/SjeCGmgy8C

So, there you have it. South Africans from all walks of life have demonstrated enormous gratitude to Advocate Thuli Madonsela for everything that she has done for our country over the past seven years. However, they have voiced scepticism about the agenda and independence of new Public Protector, Mkhwebane, who has done little to signal her intent to continue fighting for the South African public in the face of opposition from the highest level of government: our own president. Most South Africans on Twitter appear to have expressed these sentiments at least, with the exception of the BLF-Gupta community who have unreservedly thrown their lot in with Zuma against his enemies.

It will be interesting to watch how the BLF-Gupta-Zuma dynamic continues to play out. Will the BLF’s harnessing of the Gupta media machinery to amplify their radical message allow it to continue to grow and distract the country, or will their message fail to find a wide audience, much like the Gupta-media properties themselves have struggled in the past and similarly rely on tax payers’ money* to artificially keep their message alive?

Kyle Findlay heads up a data science team for a large, international market research firm. This post originally appeared on his personal blog, Superlinear, and is republished here with the permission of the author. Original blog post: //www.superlinear.co.za/?p=929