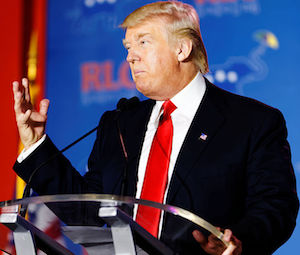 Polling day in the US represented the most publicised and significant yet also most divisive and volatile election in the history of the USA and arguably Western democracy. According to mainstream media, never before have two more unsavoury, unsuitable, unpopular and distrusted candidates run for the office of the most powerful position in the world. More has been written about these candidates, their foibles and failings and the soap opera like twists and turns over the course of electioneering. And still, the outcome is in the balance. Like the 1902 novel by George McCutcheon, these could become known as the ‘Brewster’s Millions’ election where a candidate called ‘None of the above’ would have beaten either Donald Trump or Hillary Clinton.

So who will win?

Despite the well documented FBI saga that initially saw Clinton’s polling lead disappear last week, the late surge of her support aided by Comey’s closing the investigation, her considerable celebrity coterie, and her perceived superior ground team has convinced the financial markets that she will win. Pollsters have the outcome on a knife-edge (within the margins of error) but predict a narrow Clinton win.

Where does BrandsEye come out based on accurately listening to over 27 million social media conversations by almost three million authors?

BrandsEye tabulated advocacy for each of the candidates by expressing positive sentiment of one candidate as well as negative sentiment towards the other as a percentage of total emotive conversations. We used our unique crowd sourcing technology to establish confidence levels of 99% with a 1.67% margin of error on this vast database.  And the bottom line is that we will not be surprised if Donald Trump is the 45th president.

Why do we say this?

BrandsEye was one of the few ‘pollsters’ who predicted Brexit in the UK. We are neither data scientists nor political polling experts. We merely tracked what vast numbers of people speaking their mind. They spoke with emotion, with conviction and with determination to be heard. We saw a very strong pro-Brexit sentiment finally dwindle the day before the referendum, but the Remain voice, heard that day, appeared to be too late. The disaffection with the status quo, the sense that so many of the authors felt disconnected and not represented in the system, drove more people to voting booths and the result took the world by surprise. But not BrandsEye.

Our data has shown Trump ahead in most of the battleground states even during the early weeks of October when the polls had Hillary well ahead as a result of Trump’s well-publicised misogynistic language and behaviour. Given his polarisation with the growing Hispanic vote and African Americans, he now had alienated women as well. He couldn’t possibly win, or could he? Our data said he could. 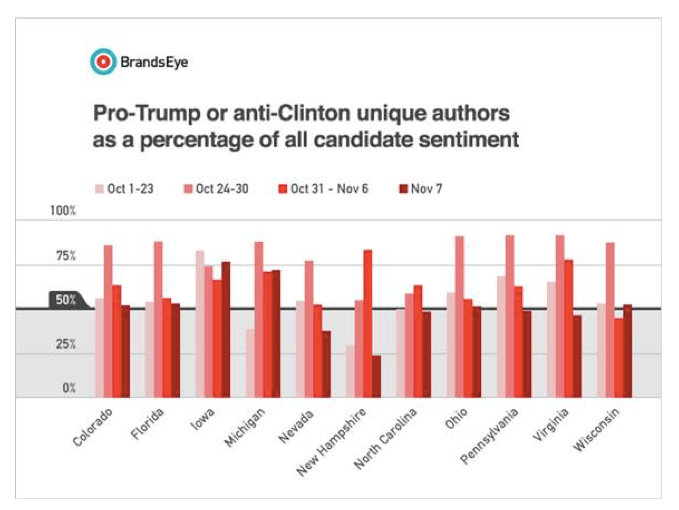 What we are seeing is a curious anomaly with respect to damaging reputational mud that has been slung at the candidates. Trump seems to be “Teflon Donald” whereas Clinton seems to be “Fly paper” Hillary. The email scandal and her lack of transparency appear to have stuck throughout the campaign. We have consistently registered the strong negative sentiment toward Clinton which has been the basis of the strong positive advocacy of Trump. This moved dramatically with Comey’s declaration on 30 October, and equally has seen it swing back in the past few days after he announced the end of the investigation. But as with Brexit, is this too little too late to overturn the strong base of support evident for the past 6 weeks on social media?

So if Trump does succeed it will be because the similarities and dynamics with Brexit were overwhelming – a growing and highly motivated sector of society that through social media found their voice to express their disdain for the establishment and a cry for change. They were a highly charged set of touchstone issues which pointed to the reasons for their disaffection – immigration; taking back control of ‘their’ country; globalisation; and the elite “conspiracy of power and influence”.  And both campaigns were littered with half-truths, lies and disinformation. Rather than being told what each candidate stood for, the electorate has been fed prurient details of each candidate’s shortcomings.

But if Hillary Clinton does win, it will be because the differences between the Brexit outcome and this US election outweighed the similarities. A referendum is a single issue, all votes count event. The US election is a complex electoral college system where voter turnout and specific demographic mix plays a key role. Voter affiliation in the US tends to follow a very strong two party system despite the candidates. Almost 40 states are deemed foregone conclusions. Voters in the UK tended to vote with their hearts on the Brexit issue and split more urban vs rural, young vs old than by party lines. And finally, social media does not include a possible major difference in that the Hispanic sentiment, key in so many of the swing states, is unlikely to be seen on English speaking social media.

That said, the social media data that BrandsEye has analysed points to a Trump victory. Despite Clinton’s late rally, as of yesterday social media advocacy points to Trump winning 5 of the key battle ground states and with that 278 electoral college votes.

And the only issue is how representative social media sentiment will be in determining the outcome We will not be surprised by a Trump victory.