Twitter diplomacy: How Trump is using social media to spur a crisis with Mexico 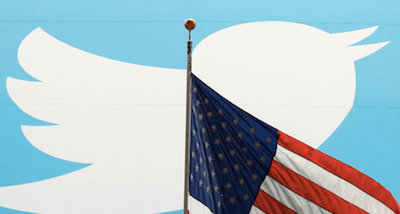 Following through on campaign promises to crack down on immigration, Trump signed executive orders to both kick-start the construction of a border wall with Mexico and block federal grants for “sanctuary cities” – jurisdictions that offer safe harbour for undocumented immigrants.

Trump justified these measures as necessary for improving domestic security. “A nation without borders is not a nation,” he said. “Beginning today, the United States of America gets back control of its borders.”

After signing the orders, Trump insisted in an interview with ABC news network that Mexico would reimburse construction expenses “at a later date”.

Trump’s push to force Mexico to pay for the wall has plunged the two neighbours into a tense and unusual diplomatic standoff. Mexico has long been a key partner and ally of the US and Enrique Peña Nieto’s government has keenly tried to avoid a standoff. Trump, on the other hand, has fuelled one with his frantic social media activity. Welcome to the era of Twitter diplomacy.

Historically, diplomacy is not one of America’s strong suits. Former UN Secretary General Boutros Boutros-Ghali once noted that he was surprised to learn that US international officials usually see “little need for diplomacy”. For Americans, Boutros-Ghali claimed, it’s perceived as “a waste of time and prestige and a sign of weakness.” But with Mexico, Trump has taken this tradition of American non-diplomacy to uncharted territories. Peña Nieto chose moderation and diplomatic subtlety to address Trump’s belligerence. This conciliatory strategy has, indeed, been perceived as a sign of weakness on both sides of the border. Yet the Mexican government’s situation is delicate. Either Peña Nieto endures Trump’s relentless humiliation, or he jeopardises the nation’s commercial partnership with the US, which buys 80% of Mexican exports. So Peña Nieto did everything possible to appease Trump, probably hoping that he would eventually moderate his positions. He even appointed Luis Videgaray – the unpopular politician who organised then-candidate Trump’s ill-received August 2016 visit to Mexico – as minister of foreign relations. Trump answered the conciliatory gesture, which was deeply controversial in Mexico, by tweeting that his southern neighbours would pay for the wall in the border “a little later” in order to build it “more quickly”. Peña Nieto then tried to warn Trump about the consequences that a conflict with Mexico could have upon the US agenda. Using the infamous druglord Joaquín Guzmán Loera, aka El Chapo, as a subtle rebuke to Trump’s stance on Mexico, the president extradited him to the US on January 19, just a few hours before Barack Obama’s term expired. US officials and the Mexican public interpreted the timing of the extradition, which had been green-lighted for months, as a Mexican housewarming gift to the Trump White House. But a different hypothesis seems more plausible. Mexico rushed to hand over El Chapo to Obama to prevent Trump from taking credit for the extradition. As Mexican journalist Esteban Illades argued, if Mexico had delayed the extradition by one more day, Trump would have boasted about his role in organising it for months on Twitter. But Trump didn’t pay attention to Peña Nieto’s warning: two days after taking office, he announced that he would begin renegotiating NAFTA with the leaders of Canada and Mexico, and set a meeting with Peña Nieto on January 31. Peña Nieto sent Videgaray and Ildefonso Guajardo, Mexico’s minister of economy, to Washington for preparing his meeting with Trump. He instructed them to avoid both submission and confrontation in negotiations with the American administration. But that plan faltered when, on the night before the emissaries were to arrive to Washington, Trump tweeted that Wednesday would be a “big day” for “national security” because he was looking forward to “building the wall”. Videgaray and Guajardo were actually in the White House when Trump left the building to sign his executive order. This insult raised outrage in Mexico. Intellectuals, politicians and citizens, both left and right, demanded that Peña Nieto cancel his visit to Washington. Mexico’s president answered this new provocation with a short video statement, in which he said that Mexican consulates would now serve as legal aid offices for undocumented Mexican migrants in the US. He resisted though cancelling the meeting with Trump, saying that he would make a decision based on Videgaray’s and Guajardo’s report out. But another social media blast from Trump derailed that wait-and-see strategy, too:

Even for mild Peña Nieto this was too much. He cancelled the meeting with Trump without even a press conference. Instead he tweeted: “This morning we have informed the White House that I will not attend the working meeting with @POTUS scheduled next Tuesday.”

As Videgaray acknowledged, “You don’t ask your neighbour to pay for your home’s wall.”

A phone call between Trump and Peña Nieto on Friday morning may have allowed for a brief cooling-off period, but without a doubt Mexico and the US have entered into an age of conflict. The consequences, in North America and beyond, are still uncertain.

Spectres of the national anthem

If the US administration moves forward with its proposed plan to build the wall and fund it by imposing a 20% tax on Mexican imports, Peña Nieto’s government has options for retaliation. It could implement a crackdown on American citizens – many of them retirees – who overstay their tourist visas in Mexico, or impose reciprocal tariffs on American exports.

Indeed, the US should not take Mexican friendship for granted. As Mexican historian Enrique Krauze has pointed out, despite recent good relations, Mexico has a series of historical grievances against the US, which remain deeply rooted in Mexican collective memories.

First, the US invaded Mexico in 1846, annexing half of its territory. This event was so traumatic that it became the main theme of the Mexican national anthem.

Then, in 1913, the American ambassador Henry Lane Wilson plotted to have democratically elected president Francisco Madero murdered. This incident plunged Mexico into a fierce civil war and postponed effective implementation of democracy in the country for 90 years.

Finally, in 1914 US marines occupied the city of Veracruz, triggering a prolonged period of hostile relations. The bond between Mexico and the US only normalised again in 1942 with Franklin D. Roosevelt’s Good Neighbour policy.

To maintain this peaceful coexistence, both Mexican and American governments have usually taken into account the complex historic relationship between the countries.

Trump’s novelty is that he seemingly has no interest in or intention to contemplate the conflicted history of Mexican-American relations – not even considering the strategic importance of Mexico for his nation.

Instead, his policy decisions seem based on social media metrics.

Mexican writer Jorge Volpi believes that Trump’s use of Twitter as a privileged medium says a lot about this president. Twitter favours speed over analysis, wit over depth, and aggression over reflection. For Volpi, these are very Trumpian character traits.

The global consequences of such Twitter diplomacy are unknowable. But in Mexico, beyond generating a diplomatic crisis, Trump’s actions are successfully arousing the dormant spirits of Mexican nationalism.

Social media platforms are on fire there. Denise Dresser, a respected liberal intellectual, declared that though Donald Trump’s presidency may last eight years, Mexico has existed for thousands of years. The historian Rafael Estrada Michel has called for Mexico to renegotiate not NAFTA but the Guadalupe-Hidalgo treaty, which established the current US-Mexico border after the Mexican-American war.

If US-Mexico relations continue in this line, Mexicans will be forced to pay a terrible price for Trump’s antics. NAFTA established a prosperous free-trade zone in North America, and without its main trade partner, Mexico will have to entirely reinvent its global alliances and its economic structure.

By the way, according to the Office of the US Trade Representative website – which, in our brave new world of alternative facts, might be taken down soon – US manufacturing exports have increased 258% under NAFTA, and 40% of Mexican exports into the US are actually originated in American inputs.

It is also likely that the US will find it seeking Mexico’s support in the near future. Neighbourly collaboration is still necessary to face the myriad challenges both countries share, including climate change and cross-border drug policy. Will Mexico be there next time the US needs it?

It now falls on American and Mexican citizens to defend and foster the peaceful relationship that has been built with much suffering over decades – not with Twitter diplomacy, but with human feeling.