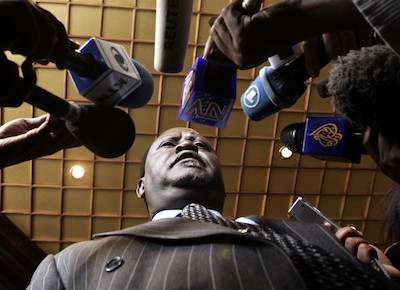 The news media is usually one of first casualties of bungled or contested elections. From the recent US elections, the UK’s Brexit vote to Zambia’s controversial 2016 presidential elections, the mainstream news media bore the brunt of much of the criticism that followed.

In Africa, biased media coverage, most often in favour of incumbent presidents, is one of the reasons voters have little faith in the legitimacy of election outcomes.

In South Africa for example, the public broadcaster routinely comes under intense criticism at election time for being a propaganda outlet for the ruling African National Congress.

Over the last few years, the nature of political campaigns in Africa has changed significantly. Politicians and political parties are now actively shaping their public profiles. They are engaging powerful PR agencies and even starting their own media organisations to market themselves.

CA played a key role in Donald Trump’s win in the US presidential elections, and in the UK’s Brexit vote through aggressive data driven campaigning.

This changing political landscape has complicated the media’s role in the coverage of elections. But there’s still an expectation that the mainstream news media should play the role of impartial arbiter.

They are expected to provide an open platform for broader public deliberation particularly at election time.

It’s this expectation that informs criticism when the media fails to fulfil this important mandate. Indeed, while digital technologies such as social media have now been widely adopted in Africa, millions remain unconnected to the Internet. This means that that these new platforms are inaccessible to the masses.

Elections in Africa are fiercely fought because the state is seen as a resource. Winning elections makes accessing the state possible, usually to the exclusion of those who lose.

Because the stakes are so high, when people lose faith in the credibility of an election some resort to violence. This was the case in Kenya following the disputed 2007-2008 elections.

This led to post-election violence. Over 1 000 people lost their lives, 600 000 were displaced and property worth millions of Kenyan shillings was destroyed.

This August, Kenya goes to the polls again in what’s expected to be another bruising political context. For the country’s news media, the coverage of these elections will be extremely challenging.

The last elections held in 2013 were largely peaceful even if the outcome of the presidential tally was disputed. The peaceful elections, which were fought with as much passion as the disputed 2007 poll, didn’t happen that way by accident.

The Kenyan media adopted a new approach in 2013 after having been accused of contributing to the violence that engulfed the country in the aftermath of the 2007 elections.

“Peace” journalism was uniformly adopted by all mainstream media. Controversial stories were not covered. Meanwhile, reference to politicians’ ethnic identities was avoided in media coverage.

Ethnicity remains an important characteristic of political competition in Kenya hence the sensitivity to ethnic markers of identity. But “peace” journalism remains controversial and the Kenyan media was widely criticised for adopting it.

Many argue that focusing on peace at the expense of the credibility of the elections, ignoring for example numerous electoral anomalies, was a case of self-censorship.

Indeed, renowned writers such as Michaela Wrong likened the Kenyan media to “a zombie army”. She argued that it had “taken up position where Kenya’s feisty media used to be, with local reporters going glaze-eyed through the motions”.

Local journalists didn’t agree. They argued that erring on the side of caution was a sacrifice worth making in light of the 2007-2008 post-election violence, when the news media was accused of irresponsible coverage which contributed to it.

As the news media decides which approach to adopt in the coverage of the next general election, it must recognise that its role has changed considerably in Africa and around the world. While mainstream media remains an important space for public debate, it can no longer be regarded as an impartial arbiter due to three key changes.

First, the African media has become an active participant in the political process because quite a few outlets are now owned by politicians. In Kenya for example, the current president owns Media Max, a company with diverse media interests including TV, radio and newspapers.

Media outlets that are owned by politicians have been known to take sides either covertly or overtly. While this tradition is part of the political culture in the United States and Europe, such partisanship is still only grudgingly accepted in Africa.

Second, elections have become an important source of revenue for the media with wealthy candidates and political parties spending large amounts of money in political advertising. As such, coverage is skewed in favour of those who can afford the high cost of advertising.

In Kenya for example, a staggering 8 billion shillings ($77 million) was spent on radio campaigns alone during the 2013 election cycle.

Finally, the number of news content providers has grown exponentially. Mainstream media now has to fight for audiences like never before. This has forced it to ignore some of the most fundamental features of journalism like the verification of stories and strong gate-keeping processes.

As political campaigns evolve in Africa, so must media coverage of elections. However, it remains incumbent upon the press to act responsibly and in the interest of democracy.